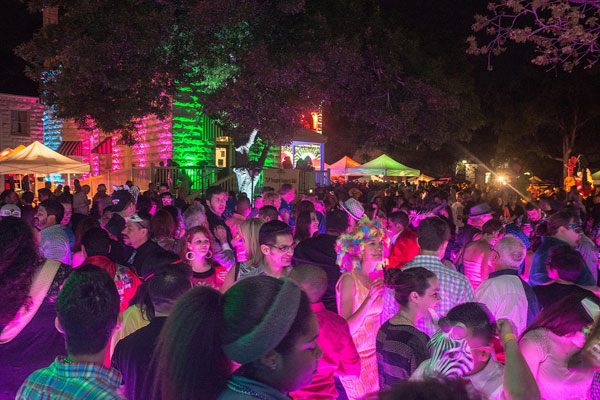 The 22nd Annual Webb Party will be held at the Lambermont Estate on April 17. (Courtesy photos)

The San Antonio AIDS Foundation’s 22nd annual Webb Party on April 17 will be the last to be held during Fiesta San Antonio. After 10 years as an official Fiesta celebration, the event is moving to October next year and will transition into a Halloween party. In keeping with that milestone, this year’s party theme is “Ultima Fiesta.”

“The Webb Party has grown to be the San Antonio AIDS Foundation’s largest fundraiser of the year,” says SAAF marketing director and spokesperson Regina Villalobos-Perez. “We’ve now reached the stage where we’d like to maximize its potential by making it even bigger and better as a Halloween celebration.”

Villalobos-Perez told Out In SA the 2016 Webb Party will be held on the weekend before Halloween.

The first Webb Party was held in the spring of 1993 and consisted of a handful of SAAF supporters gathering for a party during Fiesta. Over the years, the party has grown to attract over 1,500 guests who turn out in their Fiesta finery to enjoy drinks, food, dancing and special performances.

“The theme for 2015 is reflective of our past, all while preparing our future for some truly exciting changes,” says SAAF executive director David Ewell. “We’re making this a celebration that San Antonio won’t forget anytime soon.”

In keeping with the Webb’s move to October, SAAF’s other signature event, the Run and Walk for Life, will be moved to March in 2016.

There will also be dancing with DJ Amo spinning the tunes, a Fiesta Flourish fashion show by local designer Agosto Cuellar and performances by Sasha Taylor, the Austin City Showgirls and Nilaya Milan Raven. Crys Stone will emcee the proceedings.

As in the past two years, the party will be held at the Lambermont Estate, located just down the street from SAAF’s headquarters at 950 E. Grayson Street. Tickets are $85 pre-sale and $100 at the door. They include all food and drink. There are discounts available for military and students with valid ID. VIP tickets begin at $175 and include early entry to the party, exclusive VIP cuisine, Fiesta medals and access to a VIP lounge and bar.

There is street parking near the event, or party-goers can take a shuttle bus from the Overtime Theater, the Bonham Exchange or the SA Country Saloon.

Sponsors for this year’s event include Macy’s, Nordstrom, the AIDS Healthcare Foundation, Avita Pharmacy, the Bonham Exchange, Wells Fargo and RR Cuniff Investments. Media Partners are the San Antonio Current, KSYM, KTFM, the Rivard Report and Out In SA.

Was Jesus gay? Believe it or not, some very interesting moments exist in the Bible that imply certain intriguing possibilities....