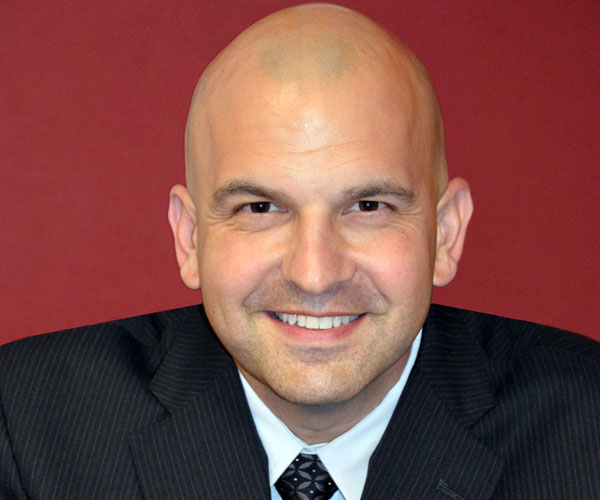 On November 14, Sgt. Javier Salazar, the public information officer for the San Antonio Police Department, officially filed the paperwork to run for Sheriff of Bexar County. He is a Democrat.

(Editor’s note: As this story went to press, Salazar stepped down from his spokesman’s position and requested a transfer to another unit within SAPD “to avoid any appearance of conflict of interest.” )

Salazar, 44, is a 23-year veteran of the SAPD who was born in Universal City in Northeast Bexar County. His father, who is now his campaign treasurer, was stationed at Randolph Air Force Base when Salazar was growing up. After Salazar’s dad retired from the Air Force, he worked as a radio announcer and later hosted a local television show, often bringing the young Salazar with him to the studio.

Salazar attended Samuel Clemens High School in Cibilo and graduated from Weyland Baptist University with a degree in criminal justice. He is married and has two daughters aged 14 and 21.

Shortly after he announced his candidacy, Sgt. Salazar sat down with Out In SA to introduce himself and discuss his campaign.

At the age of 22 you were one of the youngest cadets at the SAPD academy. What motivated you to become a police officer?

When I was growing up, I wanted to follow in my dad’s footsteps — to be a TV host, an actor, possibly a musician. I wanted to move to Hollywood to be the next big thing. However, I realized those careers did not offer a steady paycheck.

When I joined the police department, I wanted to serve a higher purpose — as cheesy as that may sound. I took to it like a fish to water. I love it.

My dad was a little disappointed that I didn’t follow in his footsteps when I joined the SAPD. However, things have a funny way of coming full circle. I was promoted through the ranks and eventually became the SAPD’s public information officer.

I worked downtown bike patrol.  I worked community policing which is where I learned a lot. I learned we need citizen’s help to solve problems. It’s a partnership where the citizens help us help them.

Whatever happens, whether I stay in the SAPD or go on to the sheriff’s office, I will always rely on the community policing philosophy that was engrained in me during my early career. That philosophy will follow me wherever I go.

Tell us about your job as public information officer.

As spokesman for the SAPD, I handle all media requests and speak on major cases and handle social media. I’m on call 24-7. I enjoy it and feel I’m well-suited for it.

I get approached by people in public, who tell me they’ve never met me yet they feel like they’ve known me for years. As a spokesperson, that tells me somewhere along the line I’ve made a personal connection. I often hear from people who say they saw a report  on TV or through the SAPD’s social media. Some respond positively saying it changed their outlook on the police.

I’m also proud of the social media program I took over in 2012 and turned into a nationally recognized program. The SAPD’s Facebook page went from 17 followers to over 107,000. It’s among the top five most-followed in the nation among large police departments.

How did you come to the decision to run for sheriff?

About a year ago, I was approached by several members of the community who liked my style, had seen some of the things I had done at the police department, transparency-wise and communications-wise. They thought I’d be good at it. To be truthful, I wasn’t interested at first. It didn’t appeal to me. I wanted to run my own department but felt I wasn’t ready yet.

As the months passed, Chief McManus decided to leave, Chief Treviño took over and I was in the community even more because there was a new chief we were trying to get introduced. People continued coming back to me, not just the same people but other community groups, suggesting I should run for sheriff someday.

My “no’s” became “maybe’s” and those became “I’m thinking about it.” I began to seriously think about it and here we are now.

What do you see as the most important issues in the sheriff’s race?

Morale. The morale of the troops. A lot of the public makes the mistake of saying, “What do I care if their morale is low?” Well, we should care.

I think the Bexar County Sheriff’s office is full of great police officers but there’s a disconnect between the rank and file officers and the top tiers. That’s sad. It creates an unhealthy environment for the troops and the public. Employee morale affects public safety.

I think that as a career police officer, I’m better suited to know what motivates and what excites police officers about coming to work — and that’s going to make a measurable difference in crime prevention and interaction with the public.

Transparency is another issue — transparency with the public and with the media. I bring everything I learned at the SAPD and one of those things is that I’m very open with the media. Reporters know they can call me at any time. They know if I have the information, I’m going to tell them. It’s not that it’s just a good way to do business, it’s what’s demanded of you if you’re running a law enforcement agency.

Community outreach is very important. It’s one thing to go from call to call to call. You need to be proactive in your approach. That means having events like the Coffee with the Cops, which we have at the SAPD, an outreach program that’s geared to the Spanish-speaking community. We had a Days of Understanding event where local activists and community groups came out to the police academy. At that event, we gave them a look at the anatomy of an officer-involved shooting. We changed some thinking.

The sheriff’s department used to have an LGBT liaison when the previous sheriff was in office. Would you consider appointing such a liaison?

Absolutely. The SAPD has an LGBT liaison, Assistant Chief Jose Banales. I would like to create a team of officers that are liaisons to different segments of our population like the military, the African-American community, the Hispanic community and the LGBT community would definitely have a liaison.

Presently, the San Antonio Police Department conducts LGBT sensitivity training for cadets at the police academy. Do you think such training would benefit the Bexar County Sheriff Department’s recruits?

Yes. It’s necessary to teach cadets how to interact with the LGBT community because it’s a real population, it’s a sizable population, bigger than we even know. You’ve got to be able to respond to members of that community and their unique needs. I think you’re missing the boat if you’re not training your cadets and continuously training your officers at annual in-service trainings. It’s got to be constantly reinforced.

Earlier this year, Out In SA did a story about a gay reality star who spent 30 days in the Bexar County Jail where he was placed in an LGBT cell block and had complaints about how it was managed. Any thoughts on this?

I can’t speak to the condition of the LGBT cell block at the Bexar County Jail but some cities have a problem sometimes because protecting the LGBTs from other prisoners can also lead to [their] isolation. In some jails LGBTs spend 23 hours a day in a cell and have restricted yard time.

Would you march in the Pride Parade if asked?
Sure.

Why do you think you’re the best candidate in this race?

I bring experience to the table — almost 23 years of law enforcement experience. It’s the right kind of experience: wide-ranging. I have experienced a vast array of different types of policing. I’m lifelong Bexar County resident and I understand the culture. I speak two languages — the two most predominant languages in the county.

I understand the needs of the citizens and the city. I was patrolling the Bexar County streets long before I decided to run for sheriff. I’m familiar with it, it’s my home, I love [it] here and I want to continue policing here for the next 20 years. Whether it’s a sheriff or SAPD badge, I’m going to finish out my career here in Bexar County in one way, shape or form.

I can’t reiterate enough that the sheriff’s office is full of quality people, but they need the kind of leadership that they can respond to in a positive manner. I know what makes cops tick and I think I’m in better touch than our incumbent sheriff to motivate those officers.