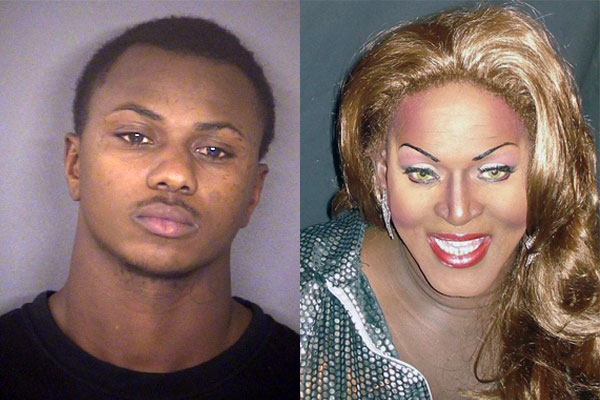 Johnathan Terrell Henderson-Houston has been charged in the murder of local drag performer Torrance Cheeves (aka Mrs. Whoochie).

Cheeves, who performed under the stage name of Mrs. Whoochie, was found dead at his home on the East Side on August 26. According to news reports, the Bexar County medical examiner ruled Cheeves died from a stab wound to the neck.

A December 14 report in the San Antonio Express-News explains,

Investigators working on the case were quickly able to track down surveillance footage from cameras at a nearby church that showed men taking property out of the house on the night of Cheeves’ death, along with a suspect vehicle that had easily-identifiable damage. When officers finally tracked down the vehicle on Sept. 17, Henderson-Houston was in the driver’s seat . . . When investigators interviewed Henderson-Houston, he denied having any knowledge of the killing, or even knowing Cheeves. However, the affidavit said results from a polygraph test indicated that he was being deceptive about his involvement in Cheeves’ death.

The report goes on to say that Cheeves knew his killer and had a previous sex-for-cash relationship with him. On the night of the murder Cheeves told Henderson-Houston that he had no money which prompted an argument.

Cheeves performed for many years at the Bonham Exchange. “We were all in tears. We can’t believe that someone who was so kind to everyone would meet such a horrible ending,” Joan Duckworth, office manager at the Bonham, told KSAT-TV after learning of the murder. “Torrance was the sweetest man you have ever met in your life. He was such a great guy. It doesn’t make sense.”

“He’s been here forever. He was here when these doors opened. He was a sweetheart of a man. At 6 foot 8 he was a teddy bear,” Lee Haines, assistant manager of the Bonham, told the Express-News at the time of Cheeves’ death.

Henderson-Houston was already being held at the Bexar County jail on an unrelated offense when he was charged with the murder.

Pride Center San Antonio is inviting the community to participate in the first long-term study to examine health and well-being...