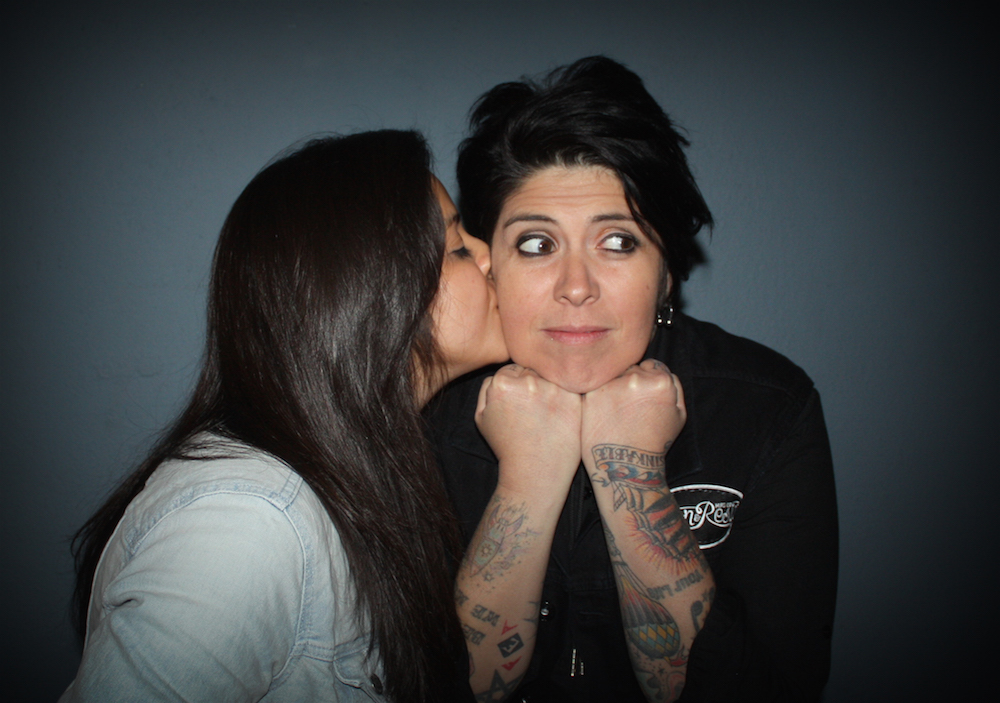 Photo by B. Kay Richter

“She took me to meet Nina and Phanie the very first time we went out.”

Jenn Alva and Kia Geronimo locked eyes one night at the Korova, and they knew instantly romance was in bloom.

“I saw her dancing and I just knew that I had to talk to her,” Alva recalled. “I gave her my number and told her to rest because we were going out tomorrow.”

That evening sparked a relationship that eventually led to a proposal and marriage.

As the bassist for Chicano punk band FEA and local breakout band Girl in a Coma, Alva was instantly recognizable when she walked into Rosella Coffee House for our interview. Her short, jet-black hair, dark mascara and heavy eyeliner frame her well-known face perfectly. But even though the bassist is well-known in SA, that fame didn’t play a role in her romance with Geronimo. Alva’s future bride had no knowledge of her music or the band that launched the San Antonio legend to international success.

“I didn’t know what to talk about at first,” Geronimo said. “She took me to meet Nina and Phanie [Diaz] the very first time we went out.”

For their wedding in December 2014, the couple decided to take a few days to vacation in New Mexico, where they had an intimate, nontraditional ceremony.

“It was simple and it was small,” Alva said. “We dressed up and the man that married us was a sweetheart. It felt so good, yet at the same time it was nerve-wrenching.”

Alva said the pressure of a new marriage is even more intense for lesbians. “You almost have to prove yourself to be better.”

With FEA starting a tour in June, Alva will be on the road for two months. That travel schedule can take a toll on any relationship, and it certainly has been an adjustment for Geronimo.

“I got used to her being at home, and then I would have to fly out to meet her,” she said.

But the couple’s bond, and a mutual passion for art, holds the relationship together. When Alva isn’t practicing or performing with her two bands, she’s painting commissioned portraits modeled after famous celebrities, pets, and even lost family members.

“When I had time for it, I would do it and it has progressed from there,” Alva said. “You connect to the painting spiritually.”

Alva said she often found herself drawing and creating cartoons as a child. Geronimo has that same creative bug, but her passion is for painting miniatures. “I ask her opinion about everything,” Alva said. “She takes her time and is very meticulous.”

While Alva says her spouse is baby-crazy, she is not yet ready for children.

“It seems like such a scary world,” Alva said. “And it can even be a fake world, especially through social media.”

A conversation with poet Richard Blanco

"We forget that to be an intelligent, thriving human being means to pull from all sources of information, knowledge, and...