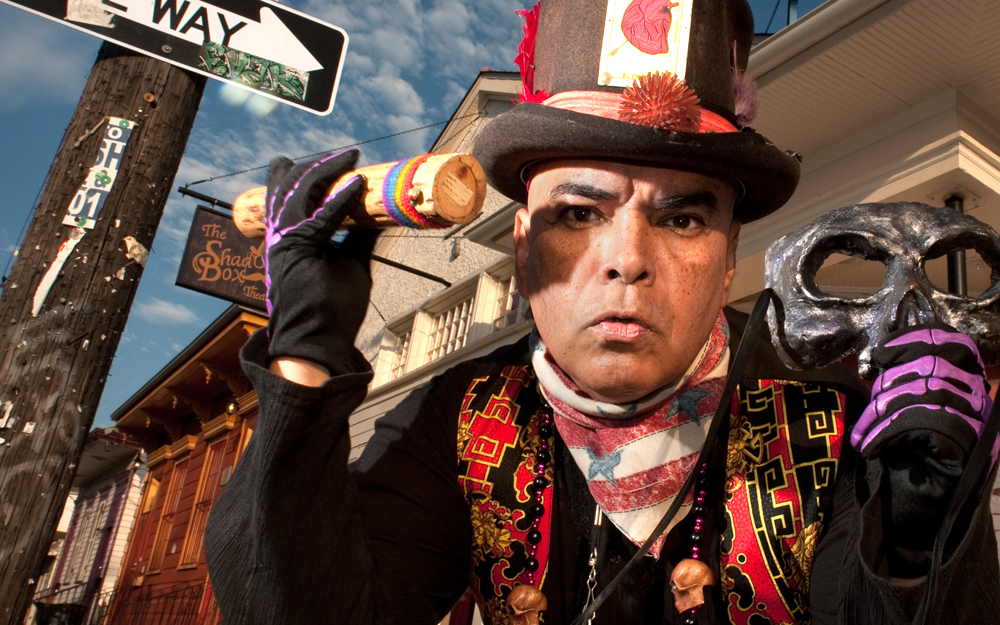 Come one, come all to Jose Torres-Tama’s Aliens, Immigrants, and Other Evildoers!

The Guadalupe Cultural Arts Center is currently hosting performance artist Jose Torres-Tama as its artist in residence. His upcoming show, Aliens, Immigrants, and Other Evildoers, has been labeled sci-fi Latino noir for its satirization of illegal immigrants as aliens from another planet.

The Ecuadorian-born, New York raised, and New Orleans based artist believes in using performance art to ignite social change for marginalized communities, like immigrants, LGBTQ people, and people of color. He is passionate about social justice issues relating to the “American Dream mythology” and the U.S. Latino immigrant experience.

He was awarded a MAP Fund in 2015 for his Aliens Taco Truck Theater Project, which entailed bringing his sci-fi Latino noir performance to non-traditional audiences and directly to immigrant communities in the back of a taco truck. As an arts educator, he focuses on teaching performance art and poetry to youth in minority communities. (As part of his residency at the Guadalupe, Torres-Tama led performance art workshops for drama students at the center this week.)

The upcoming production of Aliens, which has sold out shows across the country, focuses on the immigrant experience in the United states and “exposes the hypocrisies of a system that vilifies the same people whose labor it exploits”. Guadalupe Cultural Arts Center interim performance arts director Joel Settles said in a statement on Aliens that it examines immigrant rights and related issues in an “entertaining and thought provoking way” and will appeal to a “diverse audience”. His performances this weekend will surely spur discussion in a community of Latino people and culture, and this is the intended effect.

Following performances Friday and Saturday, Torres-Tama will lecture at the Guadalupe’s Immigrant Rights Forum on Sunday at 2 p.m. His lecture, entitled Art & Social Change: The Artist as Provocateur, will utilize multimedia (short film presentations, performance and visual art, new media, and poetry) to enhance his social commentary on the Latino immigrant experience and the “American dream”.

Burgers and Jazz with Ken Slavin at Sam’s Burger Joint