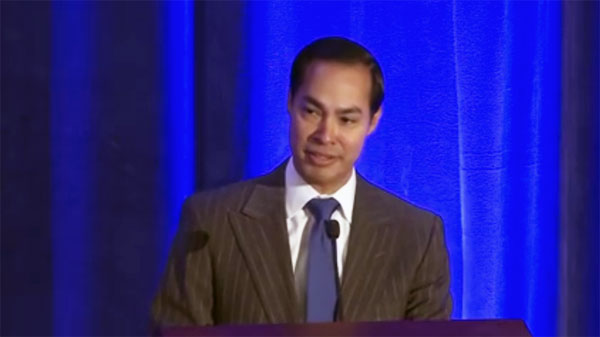 Secretary of Housing and Urban Development Julian Castro addressed a conference of the Human Rights Campaign board of directors, the HRC Foundation board of directors and the HRC board of governors at a luncheon on October 2 at the Mayflower Hotel in Washington, DC.

In his remarks, Castro, the former San Antonio mayor, talks about the steps the Obama administration has taken to protect LBGT Americans. “In just the past few months, we’ve seen our nation take remarkable steps in the movement for full equality.”

He also mentioned his successful effort to add LGBT protections to the nondiscrimination ordinance in San Antonio two years ago.

Castro acknowledged HRC’s leadership. “The fight for full equality for LGBT Americans is a defining issue of our time — a fight that HRC has been leading for 35 years.”

Reumann, who is stepping down as a local governor this year, posted on Facebook, “It has been an amazing experience, all the people and moments, while I have served on the Board of Governors for HRC SA, there are too many things to list. Yet, I feel so honored to have dedicated myself to trying to make the world a better place, and will continue in other capacities.”

Below is a YouTube video with Castro’s remarks to HRC.

We don’t just put out old furniture and wait till somebody comes by and buys it.” Anthony and Uriel Diaz,...