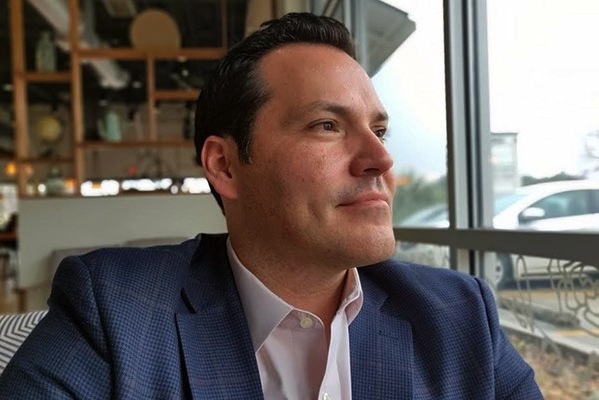 On January 12, a carefully curated tableau vivant sat behind former San Antonio mayor Julian Castro when he announced his candidacy for U.S. president at the West Side’s Plaza Guadalupe.

That multicultural tapestry represented many cultures and walks of life, but it also rewarded the city’s political elite with valuable media facetime and an association with one of San Antonio’s favorite sons. Former mayor Henry Cisneros and his wife and former councilwoman Mary Alice Cisneros were seated directly behind the candidate. Both seemed to incarnate — like the Virgen de Guadalupe herself — a subliminal blessing of Castro’s hero’s journey.

While Justin Rodriguez’s spot on the right side of the stage wasn’t as visible to the cameras as the Cisneros’, the newly appointed Precinct 2 Bexar County Commissioner was a recognizable face to many in the audience. After all, he recently took over the spot held by Paul Elizondo, one of the city’s longest-serving power brokers.

A week later, I’m sitting with Rodriguez at Café Martínez in the Medical Center, and throughout our midmorning interview, he refers to Elizondo, who died over the holidays, in the present tense.

“Paul is so iconic in this community, that you just think he’s going to be around forever,” Rodriguez says. “It’s a double-edged sword. On the one hand, I think everybody wants to go in a peaceful manner, but — from a survivor’s perspective — there’s no opportunity to say goodbye. There’s no closure. It just happens.”

Rodriguez knows from experience. He recently experienced two deaths in his family. His father died in late 2017, and his sister-in-law was murdered in March of last year, a victim of domestic violence.

Now 44, CommishJRod, as he’s called on Instagram, hasn’t physically changed much since I interviewed him in 2012, but he does feel “a little bit wiser.” He’s learned not to “over-promise,” as he says many officeholders are prone to do.

“We are people-pleasers by nature,” Rodriguez says. “We want everybody to like us, but we have to keep expectations realistic.”

It was during his time on the San Antonio City Council that he figured out that trying to make everyone happy was a fruitless endeavor.

“Councilwoman [Ana] Sandoval recently called me and said, ‘I don’t get it. Everybody loves you, Justin!’” he says with a laugh. “I was like, ‘Ana, you haven’t talked to enough people.’”

If a metaphorical clock was reset on the night Castro became mayor in 2009, one could argue Rodriguez became a political notable during that awakening. He was elected to the board of the San Antonio Independent School District in 2004, then to the District 7 council seat in 2007. In 2012, he was elected to represent District 125 in the Texas House of Representatives in 2012, where he served until his current appointment.

Rodriguez’s latest chapter began unfolding as he packed his bags for the current legislative session. After a few phone calls with Bexar County Judge Nelson Wolff, he received an offer and was sworn in during early January.

It’s the first time in Rodriguez’s public service career that he’s able to focus exclusively on his elected role and set aside his law practice and investment banking work.

“I’ve decided to drop everything else I was doing,” he says. “This is something I wake up thinking about and I go to bed thinking about — and I’m excited about that.”

Many have already asked Rodriguez if he plans to stay in office as long as Elizondo, and his answer is succinct.

“I never look beyond the term that I’m in.”

Being on the ballot every few years has been a frequent reminder of the nature of democracy. He describes running for reelection as a sort of “job evaluation.”

“I’m going back for an interview, and I’m asking my constituents, ‘How did I do? If I did well, then keep me. If I didn’t, get rid of me. I get it. Maybe somebody else can do a better job,’” he explains. “A lot of politicians loathe the campaigning aspect of it. I really look forward to it.”

It’s this philosophy that inspired him to hit the ground running as an advocate for the precinct. As part of that, he’s meeting with folks like Mario Bravo, who ran against Elizondo last year, to hear ideas on how county government can be modernized. Rodriguez adds that he’ll run for election in 2020, as he must, according to the local government code.

“I have a full 18 months to prove myself, right?” he says with a chuckle.

Where does his give-and-take philosophy come from? I’ve noticed that many politicians — like Rodriguez’s predecessor — can have a “my sandbox” mentality once they’re elected to public office.

“You know, what I think it is for me is the perspective that things can change so quickly, having experienced a few deaths in the family over the last year,” Rodriguez says. “I think that’s part of what’s changed my perspective.”

Rodriguez seems to enjoy the interaction with his constituents. It’s something he says he missed while in the “Austin bubble,” where getting things accomplished revolved around ideologies. Back in Bexar County, he feels he can focus more on ideas.

And it does feel like a new Bexar County.

“Nelson has even said as much,” Rodriguez says. “He said, ‘This is a new generation of leadership for the county.’”

Some political observers have said Rodriguez deserves this appointed position, but he prefers to stay away from that word.

“I don’t like to hear the word deserved. I think it means someone is entitled,” he says. “I’ve got to prove myself every day.”

“Are you? Nice,” Rodriguez says, taking a sip of his coffee. “I knew I liked you for a reason.”

San Antonio's Pegasus Nightclub, located at 1402 N Main Ave., was the only local LGBT establishment to make this year's...