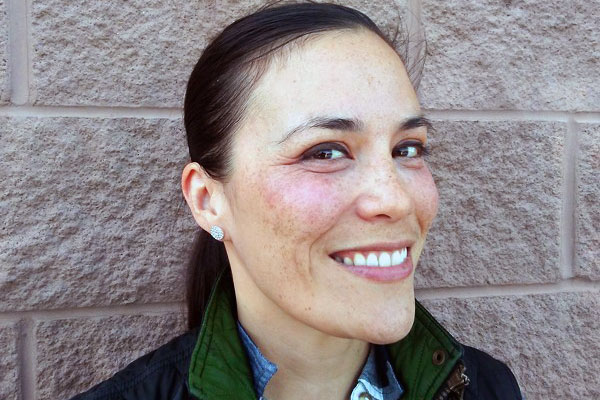 As a professional homosexual, I admit to feeling a little star struck when I see Gina Ortiz Jones, candidate for Texas’ 23rd Congressional District, waving at me through the glass-door entrance of Taqueria El Rodeo on the city’s Northwest Side.

Her sleek black hair is pulled back in an unadorned ponytail. She’s smartly, but casually, dressed, ready for the block-walks and meet-and-greets ahead. This will be a last-chance opportunity for her to tour District 23 before the May 22 runoff election against rival Rick Treviño, a race that will determine Republican Congressman Will Hurd’s challenger in the midterm election. Making the most of every hour, she and her campaign manager are scheduled to hit the road immediately after our interview.

Within the Texas Democratic Party, Jones, 37, says she is attempting to change the conversation of “who can enter into politics and who cannot.” She checks many boxes of hot-topic, social relevance.

First, she’s running in the midst of the #metoo movement, an identity-politics goldmine. She’s also openly lesbian, though the words “openly” and/or “out” feel antiquated in her case, along with the surreptitiousness that those words hitherto implied. Some could argue that Jones is standing on the shoulder pads of politicians like former City Councilwoman Elena Guajardo and former Houston Mayor Annise Parker. Her supporters celebrate her not just as a great gay hope, but a viable Democratic one.

Over coffee and tacos, Jones shares her experience of being enthusiastically received during a recent South Side block-walk. “‘Gina!’” a young woman screamed excitedly after opening her front door. Her mail-outs have apparently been effective. She’s also been profiled by the New York Times and Teen Vogue.

Another checked box is the hometown girl who thrived in the military.

The taqueria is four miles from John Jay High School, her alma mater. Her favorite subjects were math, algebra and pre-calculus.

Growing up with her sister and mother, Jones recalls a green journal that occupied the coffee table. A precursor to Facebook updates, the book served as a way for Jones’ mother, a single parent who worked odd hours, to stay in touch with her daughters daily and to remind them that dinner was in the fridge. “This book is my prized possession,” she says. Jones owns her adolescent rebellion. “Obviously, I would forget to include my report card.”

When she graduated from Jay in 1999, she went to Boston University on an ROTC scholarship.

She’s a veteran of Don’t Ask, Don’t Tell (DADT), President Bill Clinton’s 1993 attempt to end the ban on gays and lesbians serving in the military. DADT was a policy that for LGBTQ people was a war within a war, so the phrase is worn by veterans like Jones as a sort of badge of honor.

“I would fight for my LGBT community in a way that a non-LGBT person might not know to,” she says before condemning Secretary of State Mike Pompeo’s anti-LGBT stances as a legislator.

DADT also applied to her experience as a cadet at Boston University, which she says gives her an understanding of the Dreamers’ plight. “To live in fear that every single day it can be ripped away from you…” Her voice trails off. “If [my superiors] found out I was gay, I’d lose my scholarship. I’d lose my opportunity to serve my country. [Dreamers] are living with this needless anxiety.”

Identity politics is one of America’s favorite games, and Jones’ middle name ID is a potentially winning card.

Treviño refers to her, at least on second reference, as “Gina Jones,” and accuses her of adding her mother’s maiden name to the campaign to attract the Latino vote. “I’m a proud Filipino-American,” Jones fires back. “My middle name has always been Ortiz. I think sometimes we have to remind people of our shared history.”

Jones describes District 23 as a “microcosm for the country,” illustrating, with small, cupped hands, the large-population centers of San Antonio and El Paso. She compares their differences to East Coast and West Coast sensibilities. “We have the border,” she says, “so a lot of things that are playing out on a national level are playing out here because of our geography and our demographics.”

Then, out of the blue, Jones begins laughing uncontrollably.

She bursts out again. I’m confused. Her rehearsed talk has been so calm and collected up to this point.

“I’m listening,” I assure her.

“Like, you can see it like marinating…” she circles her hands over her ears. “… in a reporter way. It’s funny.”

She clearly has a sense of humor about hilarious reporter faces.

About a half-hour into our breakfast, Jones’ strong points shoot to the surface, and a comparison comes to mind. Treviño, who’s a former history teacher, is an expert on the intricacies of the country’s past. Jones, a former Air Force intelligence officer who left the White House last summer, seems to have closely informed opinions of the central players in our nation’s present day. She describes National Security Advisor John Bolton as “a hawk” and “a complete disaster – there doesn’t seem to be an interest in taking in facts.”

She talks about French President Emmanuel Macron’s recent visit to the White House. She credits Macron with attempting to relay to Trump that he needs allies. “You have to play nice with other people,” she says, noting that neither Trump nor Vice President Mike Pence served in the military. “We’re all in this together. Everyone has a say in the matter. [Trump’s] isolationist approach isn’t gonna work.”

“We are in a moment in time,” Jones says. “Who [constituents] vote into Congress matters in their everyday lives.”

When Jones needs to decompress, she turns to her favorite TV shows: PBS Newshour and the Netflix series The Crown. She identifies as a “political nerd.” She explains how the latter shows audiences a side of public life that “no one sees.” She says she’s fascinated by public figures’ personal influences. A lover of autobiographies in general, Jones is intrigued by stories of leadership. “There’s the role that people played in history,” she says, “but what were some of the ways that they reached their own decisions about service or a critical moment in time? They’ve gotta make the call [but] how did they reach that decision?”

Once she lets her guard down, Jones likes to kid around. When I can’t immediately recall comedian Kathy Griffin’s name, Jones jokingly asks for my gay card.

With her endorsements from former state Sens. Leticia Van de Putte and Wendy Davis and others, Jones isn’t at a loss for notable support. That makes her a member of the Democratic establishment in the eyes of some, particularly Treviño. She’s amused at the thought of being labeled the establishment. “I guess it’s a good day when lesbian veterans who are running for office are all of a sudden the establishment. So that’s sarcasm,” she clarifies.

After Jones gives me a crash course on Filipino language and culture, I mention that, when I was working on a cruise ship, that my cabin mate was Filipino. Halfway into my next question, Jones politely breaks in.

“Wait. Can I just ask what you did on a cruise ship?” she asks.

“Oh, awesome,” she says with a series of nods. “Very important – the buffet and the entertainment – critical.” On the word “critical” she makes the OK sign with her fingers in the way chefs do when they like something. I’ve suddenly developed a competitive relationship with risotto.

Focused on winning this runoff, Jones seems optimistic and is adhering to her mother’s advice: “Work hard. Be so good they can’t ignore you.”

Ada Vox: How a Singing Drag Queen from San Antonio Got America to Listen Up

Originally published in the San Antonio Current. To most American Idol viewers, the singing drag queen Ada Vox came out...