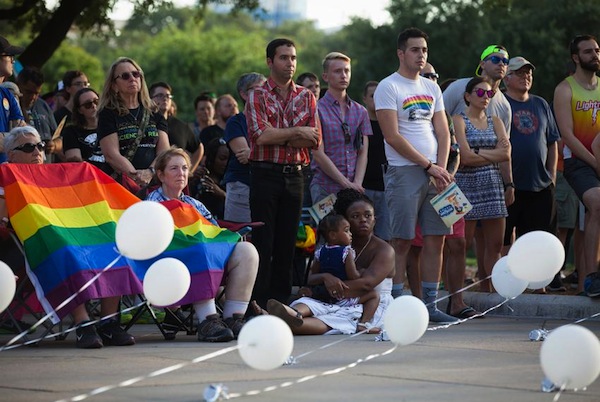 Activists and members of Austin’s LGBTQ community gathered on the steps of the Capitol in 2017 to celebrate the anniversary of the 1969 Stonewall riots. (Photo: Austin Price for The Texas Tribune)

In a nonbinding opinion, Ken Paxton said the Texas Behavioral Health Executive Council doesn’t have the authority to punish social workers who refuse service to clients based on their sexual orientation, gender identity or disability status.

By Isabella Zou, The Texas Tribune

Texas Attorney General Ken Paxton said in a nonbinding legal opinion Monday that a state board cannot forbid social workers from discriminating against LGBTQ people and people with disabilities.

The Texas Behavioral Health Executive Council, which regulates social workers, has been in a monthslong debate over its code of conduct. In October, it removed language from the section that establishes when a social worker may refuse to serve someone, allowing social workers to refuse service based on someone’s disability, sexual orientation or gender identity.

After facing intense backlash from social workers, lawmakers and advocates, the board reversed its decision just two weeks later, voting unanimously to restore the explicit protections. It also voted to request an opinion from Paxton’s office about the legality of its rule change.

Months later, Paxton’s opinion states that the board was authorized by the Legislature to punish social workers who refused work with clients based on aspects of identity like age, race and religion — but not their disability status, sexual orientation or gender identity. The board lacks the authority to add those three categories, he argues.

Additionally, he writes that state law does not prohibit discrimination based on sexual orientation or gender identity, so there are no higher grounds for the board’s protections.

The board has yet to announce how it will respond to the opinion. Legal opinions from the attorney general don’t carry the weight of law, but agencies and government officials often consult the opinions when determining what is permitted under state law.

Paxton also argues in the opinion that discrimination based on sexual orientation and gender identity may be constitutionally protected under the First Amendment. Since “religious and philosophical objections to categories of sexual orientation are protected views,” he writes, the board’s rule conflicts with the “longstanding constitutional protection” for religious expression.

Will Francis, executive director of the Texas chapter of the National Association of Social Workers, said that opinion takes a “very narrow reading” that ignores the core question of what constitutes ethical practice and how the board is allowed to delineate that through its code of conduct.

“It puts forth a political agenda in lieu of actually looking into the statutory obligations of the board,” he said. He noted that the code of conduct that prevents discrimination “isn’t about First Amendment rights — it’s about access to services.”

By encouraging the removal of the protections, he said, the opinion risks discouraging people in need from seeking these essential services.

“They have just opened the door for a social worker to discriminate based on disability, and nothing can be done about him from a licensing standpoint,” he said. “That’s an incredibly, incredibly dangerous precedent to set.”

First, a Southwest Legacy High School grad recently landed in hot water for displaying a Mexican flag at her commencement,...