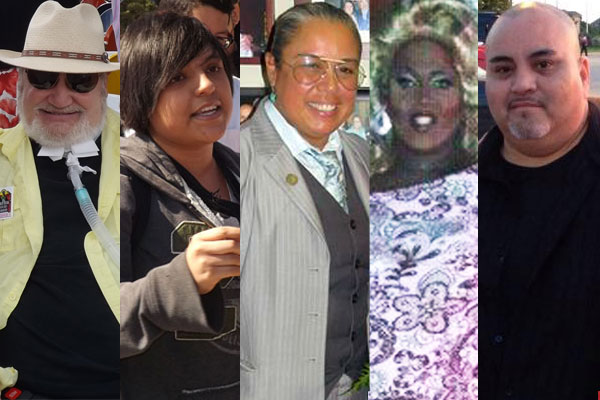 2015 in Review - Newsmakers: Robert Rehm, drama teacher, artist and Cornyation mainstay died on January 4. Trans teen Jayden Blake Castillo sought recognition as a boy at Memorial High School. Attorney Rosie Gonzalez was hired to be City Attorney of Von Ormy, Texas. Drag performer Torrance Cheeves, aka Mrs. Whoochie, was murdered in his home in August. Trans dad Dino Villarreal fought for visitation rights for the two boys he helped raise before he and their mother split up.

A select month-by-month recap of stories about our community reported here and elsewhere in 2015.

Cornyation’s Robert Rehm dies
There is no adequate way to document the contributions that Robert Rehm made to the San Antonio theater community, his former students at Jefferson High School’s Fine Arts Magnet Academy, and Cornyation, where he was a skit designer since the mid ’80s. Except perhaps the scholarship, established in his name, that supports the college education of theater-arts students from San Antonio. Rehm passed away January 4.

Bexar Republicans strike down anti-LGBT resolution
The executive committee of the Bexar County Republican Party on January 8 voted down a resolution that sought the “repeal of our local governments’ pro-homosexual policies.”

S.A. transgender dad seeks visitation rights
A San Antonio transgender man, who helped raise two boys while in a committed relationship with their mother, sought a ruling from the Fourth Court of Appeals that would allow him to see the kids on a regular basis.

Ex-stripper throws his hat into S.A. mayoral contest
A former male stripper, Pogo Mochello Allen-Reese, threw his hat into the mayoral race. The candidate formerly worked as an exotic dancer in Louisiana after serving in the Army during the Persian Gulf War. Allen-Reese’s web page proclaimed that he is now a “Slave of Jesus.”

Activist’s birthday fundraiser marks 5th year
Ana Alicia Perez says she’s often asked what possessed her to turn her annual birthday party into a fundraiser. Her response: “I don’t want want or need anything, so donate instead.”

S.A. trans student seeks acceptance at Memorial High
A transgender student at Memorial High School on San Antonio’s Southwest Side stood up to school officials on February 25 to demand that his gender identity be acknowledged.

Taylor and SA corporations AWOL on marriage equality briefs to SCOTUS
San Antonio Mayor Ivy Taylor and the city’s business community are not among those who signed amicus briefs asking the U.S. Supreme Court to strike down state laws that make same-sex marriage illegal.

SAISD offers plus-one insurance for employees with domestic partners
The San Antonio Independent School District sent a letter to its employees announcing it is expanding its group health benefits to include plus-one coverage which permits SAISD employees in same-sex relationships to insure their partners or spouses without having to qualify their relationship as a legal marriage or domestic partnership thus eliminating any conflict with state law which forbids same-sex unions.

It’s the ‘Ultima Fiesta’ for SAAF’s Webb Party
The San Antonio AIDS Foundation’s 22nd annual Webb Party on April 17 will be the last to be held during Fiesta San Antonio. After 10 years as an official Fiesta celebration, the event is moving to October next year and will transition into a Halloween party.

Ivy Taylor booed over NDO question at mayoral debate
Interim Mayor Ivy Taylor was booed during an April 14 mayoral candidate forum sponsored by the Rivard Report when she tried to defend her comment that the nondiscrimination ordinance was a political stunt.

Southwest H.S. allows lesbian student to wear tuxedo to prom
The parents of a lesbian student, with help from a representative from the San Antonio LGBT Chamber of Commerce, were able to convince the principal of Southwest High School to change the school’s prom dress code so the student could attend the event wearing a tuxedo.

With budget vote, mayor’s NDO proposal passes
Mayor Ivy R. Taylor’s proposal to create a Department of Diversity and Inclusion and hire a human relations liaison to run it became reality on May 14 when the City Council approved the measure as part of the city budget.

Market Square to host ‘Family Pride’ event
The City of San Antonio’s Department of Culture and Creative Development and the Parks and Recreation Department said they would sponsor the first annual SA Family Pride Fair on Saturday, June 6 at Historic Market Square.

Pride Center partners with local business to simplify coming out
Kori Ashton, founder of T-shirt company yepThreads.com, is looking to eliminate the stigma of coming out one t-shirt at a time.

Doggett voices concern for LGBT immigrants in detention centers
U.S. Representative Lloyd Doggett (TX-35) voiced his concern about the sexual abuse of LGBT immigrants who are in Immigration and Customs Enforcement custody.

SA church opens doors to marry all
There was joy and laughter in the sanctuary of the Lutheran Church of the Good Shepherd on June 26 as scores of LGBT congregants and their allies celebrated the Supreme Court decision that brought marriage equality to the nation that day.

Vice squad arrests three in raid at Uptown Studio
The evening was billed as a Rainbow Extravaganza, a “gay pride mini vogue ball” held at the Uptown Studio on July 3. However, at around 2:30 a.m., as the event was winding down, the party was raided by police and vice squad who arrested three individuals for selling liquor without a permit and cited the building’s owners for various code infractions.

When a longtime partner dies
A San Antonio man mourned the death of his loving companion of 25 years while simultaneously seeking the legal recognition needed to plan the burial.

SA director premiers film on same-sex domestic violence
“Unimaginable,” a new film by local writer-director Cedric Thomas Smith, explores the topic of domestic violence in a gay relationship. It had it’s premier on July 31 at the Tobin Center for the Performing Arts as part of the SAFILM Festival.

Council members express concern over SAAF leadership
Three members of the City Council expressed concern over recent management changes at the San Antonio AIDS Foundation during a discussion last Thursday about the distribution of funds to provide housing for homeless people with HIV.

LGBT community leaders on panel to interview police chief candidates
Three activists from the LGBT and allied community were chosen to be a part of a panel of local citizens who are providing input on the selection of San Antonio’s new police chief.

How LGBT-friendly was the visiting Namibian president?
Mayor Ivy R. Taylor welcomed Namibian President Dr. Hage Geingob to San Antonio for a two-day visit that included a welcoming ceremony at the airport, a visit to a City Council meeting, a photo op at the Alamo, a business breakfast at the Plaza Club and a speech at the University of the Incarnate Word to the World Affairs Council of San Antonio.

A painful separation as SAAF moves patients to nursing homes
A plan to move long-term patients at the San Antonio AIDS Foundation to nursing homes took a toll on the relationship of two residents who have been roommates and companions for the last 16 years.

‘Queer Brown Voices’ speak out at Esperanza Center
In Queer Brown Voices: Personal Narratives of Latina/o LGBT Activism, the new anthology from the University of Texas Press, fourteen writers from around the country document the often forgotten contributions of LGBT Latina/o activists in the LGBT movement.

The Saint Showbar closes
After 23 years of drag shows, dance parties and happy hours, the Saint Showbar on Lexington Avenue announced it was closing for good on Saturday, October 3.

PrEP clinic planned for downtown SA
A professor from the University of Texas at San Antonio is working on opening a clinic downtown which will provide individuals with information about and access to PrEP, an FDA approved HIV prevention medication.

RGV group launches survey of LGBT immigrants
An LGBT organization in the Rio Grande Valley is conducting what may be the first survey aimed at LGBT immigrants.

Transgender student welcomed at Episcopal school
A longtime male student at St. Luke’s Episcopal School in Alamo Heights returned to classes after the Thanksgiving holiday as a girl. The school’s headmaster Thomas McLaughlin told parents, “After much prayer, research and thorough consideration, we have concluded that St. Luke’s will reaffirm our intentional commitment to inclusivity.”

Man charged in death of SA drag performer
San Antonio police have charged Johnathan Terrell Henderson-Houston in the murder of local drag performer Torrance Cheeves. Cheeves, who performed under the stage name of Mrs. Whoochie, was found dead at his home on the East Side on August 26.

2015 in Review: Honorable and Dishonorable Mentions

After a year-long discussion, the U.S. Food and Drug Administration (FDA) announced last week it would lift the 32-year-old lifetime...