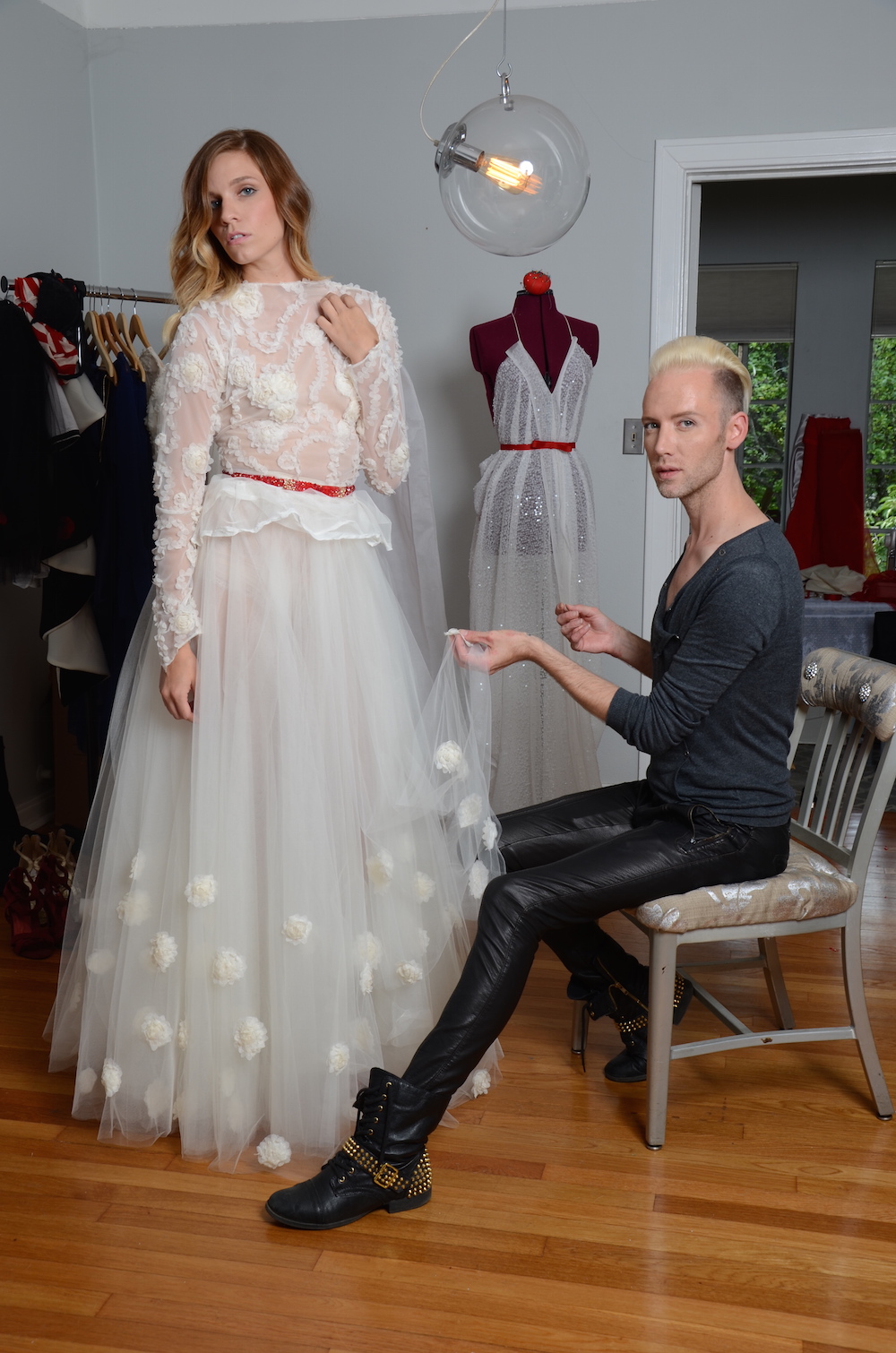 Leighton Whittington, right, at work on his new collection. Photo by Bryan Rindfuss.

“I figure my way to maintain our family’s history and legacy  is to do what I do.”

After living in Los Angeles and New York and working as a model, ballet dancer and hair stylist, San Angelo native Leighton Whittington found his calling as a fashion designer. Presented to the public in September of 2014 under the name Leighton W. Couture, Whittington’s debut collection “Salvation” ruffled a few feathers with its pointed Catholic references and risqué styling choices, but it ultimately drove home his creative vision for confident, sexy women who are unafraid to take sartorial risks.

Inspired by the effortlessly chic fashionistas one might spot strutting the streets of Paris, and iconic French designers such as Hubert de Givenchy and Yves Saint Laurent, Whittington’s follow-up, “Je Suis Une Femme” finds the self-taught designer dialing down the dark drama of “Salvation” in favor of a lighter, more wearable aesthetic. Rendered in a palette reminiscent of the French flag and comprising roughly 20 looks—ranging from tailored daywear to hand-embellished gowns and a bejeweled jacket reportedly appraised for $10,000—the sophomore collection will be unveiled September 12 at Brick during a reception enhanced with live performances of Edith Piaf classics.

In anticipation of the big reveal, we sat down this summer for a chat with Whittington, who recently launched Build the House, a crowd-funding campaign that aims to raise $9,500 to develop his one-man operation into “the first couture fashion house in San Antonio.”

Tell me a little bit about your background.

For the majority of my life I was a ballet dancer and a fashion model and had no idea I would end up in fashion design … [Coming] back to San Antonio I had no idea what I was going to do creatively at all … there was really no work for me. And then I decided that I was going to get into the hair industry and open up a studio. Mark [Arevalo] was doing a shoot with one of his models [and] wanted something for her to wear that was just cool and unusual and … I had sketchbooks dating back to like 1994 full of design stuff … I thought, maybe I can make something not knowing how at all. I didn’t know if it would work, and it did. And then he wanted to have original stuff for his shoots from that point on. So by the third one I was like, maybe I can do a whole collection and really try my hand at this. I think it was really more of an artistic endeavor than anything.

Was moving between Texas, California, and New York driven by your ballet career?

Los Angeles and New York were purely ballet … Texas happened because I would come to visit my family and upon one of those visits is when I met Mark. And then it turned into a back-and-forth from LA to Texas thing, and then eventually I just chose San Antonio. Well, I chose Mark. And that meant choosing San Antonio. And I do love it here. We have such an insane family history in San Antonio that helped me make that choice … I don’t picture myself being able to do the things that they did that made such a mark on San Antonio and on Texas [but] if I can continue growing this and perhaps have the first couture fashion house in San Antonio, that would at least be a way for me to keep our family history and name relevant.

What is your family’s legacy?

They’re Tafolla—you know Tafolla Middle School and … my cousin Carmen Tafolla has been a big help in getting the Institute of Texan Cultures to include my three-times great grandpa’s memoir in [its collection]. It will be the first thing written fully in Spanish that they have … He fought on the American side of the war, so it’s his perspective of that [and] how he got here as a child [who] basically walked across the country and ended up in Texas … And then my grandpa and his brother, they had the first Hispanic-owned law firm here, and did a lot to change some of the laws regarding migrant workers and Hispanic people … So, since I didn’t go to law school and I wasn’t in a war and I’m not a poet laureate, I figure my way to maintain our family’s history and legacy … is to do what I do. Luckily, I found what I think I do best.

Showing in September you’re aligning yourself with New York Fashion Week. Has there been any talk of you doing something during Fashion Week San Antonio?

I wanted it to be in September because we all call that the “New Year’s of fashion.” And I had no thoughts of Fashion Week San Antonio at all … After my show I was then invited to be part of FWSA … So I would like to be part of [it] as I am a local designer … If you can have local students in the shows then it seems like you could have actual functioning designers in the shows. But as of yet we haven’t heard anything and I’m certainly not going to go out of my way to make myself a part of it.

Let’s talk a little about your selection of models.

Are they your friends, or clients from the salon?

Some of them I find random places … some of them are models that I’ve worked with in the past. So last year there were four girls that I know through modeling … one of them is a very close friend of mine, and Shelby [Turnage] I found at Starbucks. She was leaning out the drive-through window and I was waiting for my drink and I thought, wow, she’s got such a great butt and she’s so tall … It’s been amazing to watch her develop as a model [and] it’s fascinating to see how this [collection] specifically has come alive on her.

I remember quite a bit of transparency with your last collection.

Yeah, a lot of nipples.

Did any of your models have an issue with that? Or did they just trust you intrinsically?

I did find a lot of trust. When they would come here for the first time for a fitting … I would always feel like I had to warn them, ‘Just so you know, this is very sheer.’ And I try to gauge women in their comfort level … Every time they’d put something on they were all very pleased … very happy walking in it, wearing it, and comfortable being in front of us with nipples showing. But then it’s another question once showtime comes, because then they have to be in front of a crowd of people and photographers … The only one that I think had an issue, my dear friend Amelia, the actress, she actually wore a nude silicone nipple cover … And then suddenly all of the girls were like, ‘Well, why does she get to wear nipple covers?’

I’ve never even heard of that.

Oh they’re amazing. If I find a pair I’ll show them to you. We call them “space nipples” because when you take your clothes off you have no nipple, they look like skin. They’re incredible … Tina Rodriguez was in the show last year … that’s Robert’s little sister … And her body is insane … She’s very curvy, very voluptuous … I wanted to protect her image. And I told her she didn’t have to go completely bare under her dress [but] before she walked out onto the runway [she] was like, ‘Do you want me to go braless?’ … Then off came the bra. Her boobs are the ones that ended up in all the publications.

Tell me about your inspiration for this collection.

I was sitting around and I couldn’t figure out what to do, and we had some friends over and we were just drinking wine … and I drew this [sketch] just for fun. Mark said, ‘Oh she’s so cute; she looks so French.’ And I was like, ‘Yeah, she does look really French.’

It looks a lot more day-wear than your first collection.

It’s going from super-casual … very youthful things, and then … transitions into what a fashionable girl might wear in the daytime to her office and then meet her friends for drinks and then maybe even on a date. The materials shift, too. So the first [pieces] that come out are jersey knits and really playful, girly satins. Then it moves into the Japanese silks and French chiffons, all of these things with patterns and really fine finishes … And then it shifts more into formal wear … and then the final looks are bridal. So it’s kind of following this girl throughout the different periods of her life.

We surveyed local LGBTQ leaders to come up with our 2015 Most Influential list: 16 individuals who made particularly notable...