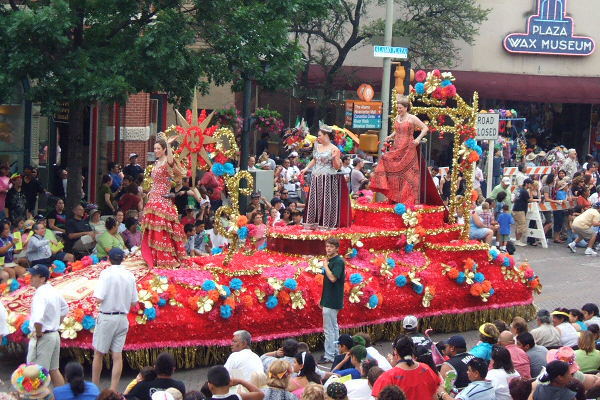 The Battle of Flowers Parade passes along Alamo Plaza in front of the Menger Hotel, an area where many LGBTs gather to watch to the parade. (Photo by Sam Sanchez) Fiesta San Antonio is observing its 125th anniversary with ten days of parties and parades beginning on April 14. The celebration started in 1891 as a parade to honor the memory of the heroes of the Alamo and the Battle of San Jacinto. It has evolved into one of the premier festivals in the US.

April 9 – Midnight in the Garden of Good and Evil
A masquerade party benefiting Fiesta Youth, Saturday April 9, 2016 at 7:00 p.m. at 724 N. Olive St. General admission: $50. VIP Admission: $75. Co-host: $125. Online ticket sales will close at noon on April 8. If available, ticket prices at the door will be $15 higher for each level. There will be dancing under the stars, a silent auction, open bar and bites. Tickets are available on line at this link.

April 15- Fiesta del Barrio
The Orgullo de San Antonio LGBT LULAC Council 22198 invites the community to Fiesta del Barrio at Estela’s Mexican Restaurant, 2200 W. Martin St.,  on April 15 from 5 to 8 p.m. Admission is free. There will be food, cash bar and live music by Leslie Lugo. According to the invitation, “Our Fiesta event is aimed at congratulating LGBT LULAC for organizing and encouraging voting this Fall.”

April 17 – The Chili Queens Chili Cook-Off
Come taste the different chilies and be a part of the judging. Contestants arrive at 1:00 p.m. Organizers say, “Everything must be prepped on premise and you must have a tacky queen to represent your chili.” Doors open at 3 p.m. and judging begins at 6 p.m. At the Bonham Exchange. Proceeds benefit the San Antonio AIDS Foundation. This is an 18 and up event. ID required. For more information call 210-224-9219. April 19 – NIOSA Pride Ride
Gay Night at Night in Old San Antonio returns on Tuesday, April 19 with the Annual Pride Ride Shuttle from the Main Avenue Strip to the gates of NIOSA and back. Shuttle runs from 5:30 PM to 10:30 PM. Cost is $5 roundtrip. Proceeds benefit Pride San Antonio. Wristbands can be purchased at Luther’s, The Annex, Heat, Sparky’s, The Essence, and The Silver Dollar. April 19 to April 21 – Fiesta Cornyation
Fiesta Cornyation has been proclaimed by its organizers as the “raunchiest and cheapest” event of Fiesta. The extravaganza is part drag show, part satirical revue, part beer hall bawdy-fest. Since becoming a non-profit organization, Cornyation has donated over $2 million to local charities. Tickets are available at the Empire/Majestic Box Office and on Ticketmaster.com.

April 20 – Fiesta Frenzy
The 16th Annual Fiesta Frenzy will feature female illusionists, comedians, folkloric dancers, and performance dance groups. Mistresses of Ceremonies are Eryca Daniels and Autumn Summers. A portion of the proceeds will go to drag icon and South Texas legend Shady Lady. On April 20 at 8 p.m. at the Josephine Theater, 339 W. Josephine. Tickets are $25. Box seats are $50. For information and tickets call 210-734-4646.

April 23 – Fiesta Block Party on the Strip
The final night of Fiesta will be celebrated on the Main Avenue Strip with a block party in front of Sparky’s, Heat and Knockout. There will be live music, vendors, food and fun. There is no cover for this event.

Rodgers & Hammerstein’s ‘Cinderella’ Lands at the Majestic This Week

In 1957 when Rodgers and Hammerstein’s Cinderella first premiered on CBS as a made-for-television musical starring Julie Andrews in the lead role,...