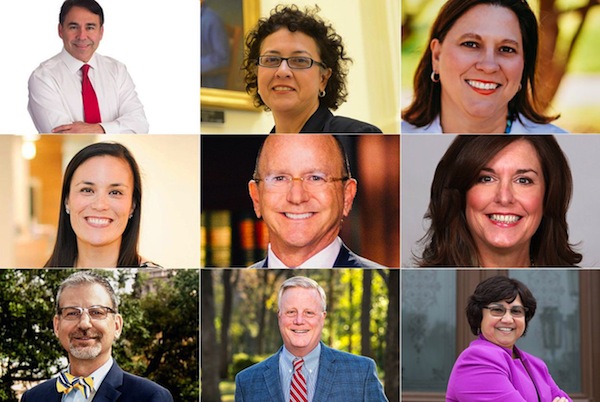 A self-described “gun-toting, truck-driving, true Republican,” Shannon McClendon avidly followed state politics and served as a five-time appointee for various boards under former Texas Gov. Rick Perry. But until now, she never pushed herself to run for elected office.

“I’m a Republican who happens to be gay,” the lawyer from Hays County said. “I’ve been told on more than one occasion from members of my own party that Republicans eat their young. So I was pretty much scared from running.”

Then came the 2017 special legislative session, in which legislators debated a bill championed by Lt. Gov. Dan Patrick requiring transgender people to use bathrooms in public schools, government buildings and public universities based on their biological sex.

It failed to pass, but McClendon said the fact that the bathroom bill was seriously considered made her so “incensed” that she couldn’t sit by the sidelines any longer. She is now challenging state Sen. Donna Campbell, R-New Braunfels, in the Republican primary for Senate District 25.

According to a list compiled by OutSmart, a Houston-area LGBTQ magazine, McClendon is one of at least 48 openly LGBTQ candidates in Texas vying for federal, state and local offices — from the U.S. House of Representatives to the state Legislature and from the Texas Supreme Court to the Austin City Council. The number is roughly three times higher than in any previous election cycle in the state’s history, the magazine reported.

Candidates and experts attribute the unprecedented number to the frenzy stirred up by the Texas bathroom bill and the Trump administration’s proposal to ban transgender people from serving in the military.

“It’s been shocking for many of us how easily some of the progress we’ve made can be ripped away,” said Gina Ortiz Jones, a gay Democrat hoping to challenge U.S. Rep. Will Hurd, R-Helotes, in the November general election. “And a lot of folks are done assuming someone is going to do what we could do ourselves.”

But the bathroom bill has done more than just bolster LGBTQ individuals’ resolve to seek elected office. Those running said it has also made voters more receptive to their candidacies.

The path to elected office

As more LGBTQ people are elected to office, their sexuality and gender identity become less of an issue, Israel said.

“The longer I’m in the public eye, the more people want to know my position on transportation issues than LGBTQ issues,” said Israel, who was first elected to represent House District 50 in 2014 and is running unopposed in her re-election bid. “We’re making forward progress. People are more accepting, and you see even conservatives embracing the concept of gay marriage and accepting their neighbors.”

Don Haider-Markel, a University of Kansas professor who studies LGBTQ political participation, said many candidates first entered the political fray on the tails of former LGBTQ officials. They volunteered on campaigns or obtained a staff position post-election, which gave them a launchpad to run for office, he said.

“With a lot of candidates in Texas, you see a similar pattern. They’re well-networked in the political community already,” Haider-Markel said. “They’re not running for office on a whim. They’ve been building toward this over time.”

Almost all of the candidates on OutSmart’s list are challengers, Democrats and from big cities. Haider-Markel said LGBTQ candidates in Texas — and ones in other traditionally red states like Kansas and Arkansas — tend to run in districts that lean left and are likely to support Democrats. Republican LGBTQ candidates face a steeper climb in getting elected, occasionally winning their primary election but usually losing the general election to the Democratic nominee, he said.

The Victory Fund, a national group that endorses openly LGBTQ candidates at all levels of government, has had more than 20 Texas candidates apply for endorsement this month alone, compared to 17 in all of 2016, according to spokesperson Elliot Imse.

Annise Parker, the Victory Fund’s president and CEO, said the increase in LGBTQ Texas candidates is part of a national trend that stems from the Trump administration’s anti-LGBTQ rhetoric and proposed ban on transgender troops.

Parker, a former Houston mayor and the first openly gay person to lead a major U.S. city, said more underrepresented candidates — including LGBTQ people, women and people of color — are running for office because they are worried about the country’s direction.

Shaking the stigma in Texas

While the Trump presidency may have created discontent among voters, the bathroom bill grabbed many Texans’ attention and forced them to solidify and act on their beliefs, Haider-Markel said.

As a result, Parker said, more voters began focusing on whether candidates could “get the job done” on issues affecting a broader scope of Texans, rather than on their sexuality or gender identity.

Mark Phariss was one of the plaintiffs who sued to overturn the Texas ban on gay marriage. But Phariss said only the recent confidence that a candidate’s sexuality wouldn’t decide a political race encouraged him and many others to place their names on the ballot.

“I always felt I wouldn’t be judged on my own merits,” said Phariss, a Democratic candidate for Senate District 8, which is an open seat now that state Sen. Van Taylor, R-Plano, is running for Congress. “Now I decided to give Texans a choice and let them make the decision themselves, rather than assuming. I think that’s really what all LGBTQ candidates are doing.”

While on the campaign trail, some office-seekers have noticed their LGBTQ identity is rarely brought up, if at all. Democratic gubernatorial candidate Jeffrey Payne said he seldom addresses being gay while stumping.

“If someone asks, I’m honest about it,” Payne said. “But when I used to test the waters and tell voters directly, they’d say, ‘We don’t care that you’re gay. As governor, what are you going to do?’ And it’s wonderful.”

Still, Jones — the Democrat who hopes to challenge Hurd — said she can’t separate her experience as a veteran and being gay from her candidacy, especially after serving under the “Don’t Ask, Don’t Tell” policy.

“I bring it up,” Jones said. “You don’t want to be accused of playing identity politics, but politics is about identity. I’ve been able to show people that I know what it’s like to have the talent but have others concentrate on something that shouldn’t matter.”

However they address being part of the LGBTQ community, candidates agreed being open about their sexuality while running for office is crucial for future candidates. The visibility, they said, will eventually normalize the idea that LGBTQ leaders can be qualified leaders.

“I’m married to the love of my life, and that should be a non-issue,” McClendon, the lawyer from Hays County, said. “Maybe in time that won’t be an issue. Many of us in the broader community are looking forward to that day.”

The pastor of San Antonio's Metropolitan Community Church has resigned from the governing board of the Universal Federation of Metropolitan...