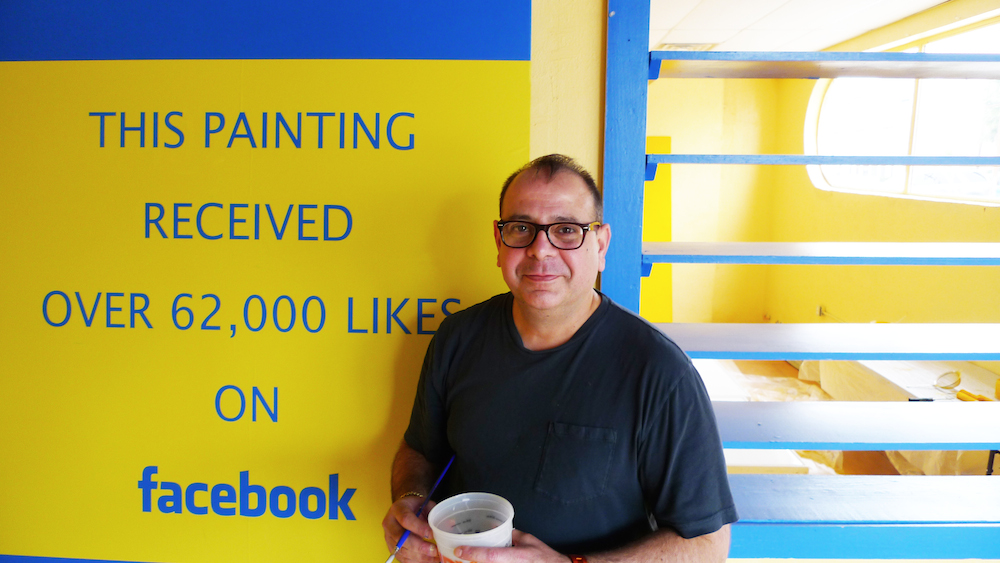 Sala Diaz founder Alejandro Diaz is back in town for a retrospective at SPACE. Courtesy image.

Alejandro Diaz says his artwork is a “form of social activism.” The New York based artist tackles difficult subject matter through his use of humor and addresses the Mexican American experience in the United States. An exhibition of recent work, It Takes a Village, will be on view at SPACE: Linda Pace Foundation Gallery April 17- September 12, 2015. An opening reception will be held 6-8 pm. Diaz, and curator Kathryn Kanjo, will give an artist talk and tour of the exhibition on April 18 from 2-3 pm.

Out In SA spoke with Diaz during a recent phone interview about the upcoming exhibition and the evolution of his work.

“My work has always addressed political issues using humor, so this was just a natural progression,” Diaz said of his latest work–a series of cast-resin pieces of furniture in the shape of migrant workers. The series, titled Muebles, is a nod to the work of Allen Jones and alludes to the exploitation of migrant workers in the United States. “I think these are meant to be humorous, but I think it’s the heaviest work that I’ve ever made. The humor might not be so prevalent as it was in the other work. They may be more shocking than anything else.”

Work in progress from Muebles, a new series by Alejandro Diaz. Courtesy image.

Muebles is significant in more ways than one.

“Dealing with the human figure is new for me,” the artist said.” In the past, I was the figure. I would be dressed up as a mariachi selling cardboard signs on Fifth Avenue, and now these sculptures are kind of the offspring from that kind of performance art.”

Other works in the exhibition draw upon art movements and influences ranging from Pop Art to abstraction and Mexican folk art.

This is Not a Calder, by Alejandro Diaz. Courtesy image.

This is not a Calder, a handwoven tapestry produced in collaboration with the Taller de Gobelinos in Guadalajara, references the works of Alexander Calder and Rene Magritte. “I like the whole idea of everything being made by hand,” Diaz said, “although my paintings look like machines made them. But these other sculptures, the tapestries–I really like the craft element, and the handmade element as well. And I like to juxtapose that with something that looks machine-made.”

Diaz wants to blur the line between high art and more craft-oriented art.

“To me it’s all the same–anything that’s made by a human hand with an artistic intention. There shouldn’t be a different kind of importance given to making a beautiful ceramic pot verses making contemporary art paintings. I don’t like hierarchies.”

Maura Reilly, former director of the Linda Pace Foundation, handpicked Diaz for the upcoming exhibition before leaving her post in 2014.  She is a strong supporter of LGBT artists and artists of diverse backgrounds.

Diaz, who is also gay, sees parallels between the plight of Mexican Americans and various other groups living in the United States including women, minorities, and the LGBT community. He believes his art will speak to those groups as well.

Diaz is a Texas native. In 1999 he received his MA from the Center for Curatorial Studies, Bard College. He is a 2008 recipient of the Louis Comfort Tiffany Foundation Award for excellence in the visual arts.

Quizzing the candidates in the Texas District 124 runoff

A pop quiz for Delicia Herrera and Ina Minjarez but only one responds Four candidates vied in a March 31...