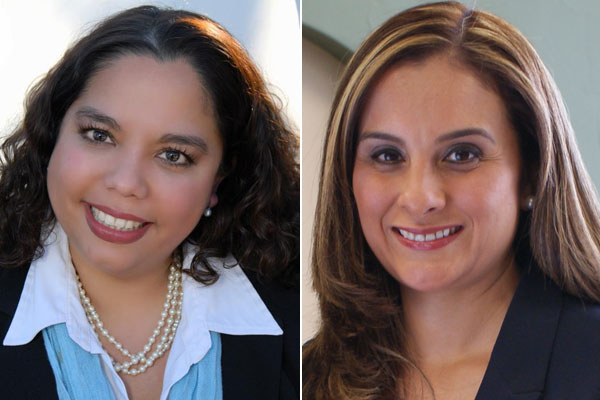 Delicia Herrera and Ina Minjarez are facing off in the April 21 runoff election for the Texas House District 124 seat. Out In SA offered the candidates a pop quiz on the issues but only Minjarez responded.

In a runoff slated for April 21, Ina Minjarez, who came in first in the race with 42 percent of the vote, will face off against the second place contender Delicia Herrera, who garnered 28 percent.

Stonewall did not make an endorsement in this race. However, Minjarez was endorsed by the San Antonio Express-News.

The special election has moved so quickly that there hasn’t been much time for candidate engagement. So, Out In SA offered Herrera and Minjarez a pop quiz that included questions of interest to LGBT voters.

The candidates were given one week to complete the quiz. However, on the night before the deadline, Out In SA received an email from Gina Galaviz, president of The Eisenberg Group and a consultant to the Herrera campaign, that read: “Delicia sends her apology as it appears she has not had a chance to complete your questionnaire. The campaign thought we had another two weeks to get strategies in place…however, the Governor’s announcement on Thursday that the runoff election is on April 21 has set us all into hyper drive. Please let me know if there is anything else I can do.”

What follows are the responses submitted by Minjarez.

1. What in your background and work experience qualifies you for this position?

Throughout my life, I watched both of my parents work hard and make many sacrifices so I could succeed. My father served in the military and owned a small business, while my mom worked in the cafeteria of my elementary school. My parents taught me to be grateful for all my blessings and the importance of serving others.

Their sacrifices afforded me the opportunity to attend the University of Notre Dame, and then St. Mary’s School of Law. I went on to serve as an Assistant District Attorney in Bexar County, where I represented survivors of family violence and prosecuted defendants charged with crimes against children. Later, I opened my own law practice, helping small businesses and families with their legal issues.

For the past fifteen years, I have represented my clients’ interests in courtrooms throughout the state. My work experience and my educational background have prepared me to represent the people of this district. I have the knowledge and ability to research different areas of the law and know how to thoroughly examine legislation, as well as how it will affect the community.

2. What do you see as the primary concerns for voters in District 124?

While visiting with residents of this district, the primary concerns they have shared are: restoring and increasing public education funding; alleviating traffic congestion; sustaining job growth; and ensuring our veterans and seniors are receiving the support and services they need.

3. Pick one of the three following education topics and explain why you do or don’t support it: school vouchers, TAKS testing, expanding pre-K.

The test-driven educational rating system in Texas — requiring mandatory, standardized tests and attached penalties — has forced our students, teachers, and schools to spend far too much time on test preparation, practice testing, and test administration, to the detriment of real instruction. The excessive emphasis on standardized testing has been only superficially addressed, not fundamentally corrected, by the legislature. Reducing the number of end-of-course exams that students must pass to graduate has not reduced the test obsession driven by the punitive use of standardized testing under the State of Texas Assessments of Academic Readiness (STAAR) rating system for districts and schools. I am very concerned with the overemphasis on standardized testing. We must swing the pendulum back toward teachers to make a true difference in the classroom. Teachers prepare our children for the future, not standardized tests.

4. Rather than spend excess state revenue, Republicans in the legislature want to give tax cuts to home owners and businesses. Where do you stand on the tax cuts passed by the Texas Senate on March 25 and which will soon be considered in the House?

I would support the tax cuts only if they are meaningful to middle class homeowners. Otherwise, the revenue should be kept and invested in public education and transportation.

I am a proponent of local control; however, I am not in support of cities which implement a rule, ordinance, or regulation that in any way illegally discriminates against a protected class, like the LGBT community.

6. So-called Religious Freedom Restoration Acts in Indiana and Arkansas have backfired and brought strong criticism from the business community because they allow businesses to discriminate against individuals based on religious beliefs. Similar bills are have been introduced in Texas. What’s your opinion of such bills and do you think efforts to pass them will be successful in our state?

These bills are not only hateful and discriminatory, but they are harmful to our great state and are potentially damaging to our economy. Legislation that would allow businesses to single out and discriminate against LGBT Texans is a waste of legislators’ time and taxpayer dollars. Why are we more concerned with singling out LGBT people than equitably funding our public schools or fixing our roads? As the next State Representative for House District 124, I’ll do everything I can to combat these laws, because we’re stronger when all Texans are treated equally, with dignity and respect.

7. Three bills filed this year would turn transgender people into criminals if they use a restroom that is appropriate to their gender identity. They would also turn employers and building managers essentially into bathroom police who must — under threat of fines and criminal prosecution — verify the gender of individuals using their restrooms. How can we approach this problem of public accommodation without stigmatizing transgender people?

These bills are deplorable: fear mongering does nothing to bring the people of our great state together. These bills directly conflict with federal non-discrimination provisions that provide protections for gender identity and expression under Title IX and Title VII. We must pass legislation that protects transgender Texans’ right to use whichever public accommodations make them feel the most comfortable and safe. And, if we cannot pass protective legislation, I will fight to keep discriminatory bills such as House Bills 1747, 1748, 2801 and 2802 from passing.

8. There are six bills under consideration that would openly seek to subvert any court ruling that the state’s ban on same-sex marriage violates the U.S. Constitution. Do you support marriage equality and should Texas acknowledge same-sex marriages performed in states where it is currently legal?

I absolutely support marriage equality and believe wholeheartedly that Texas should acknowledge same-sex marriages in states where it is currently legal.

9. Would you participate in the Pride Parade and attend LGBT events and meetings in your role as a state representative?

Proudly! I’ve participated in multiple San Antonio Pride Parades in the past.

10. Any words for your constituents as the election nears?

I respectfully ask the voters to get to the polls one last time and cast their votes. The first round of voting in this special election recorded the lowest voter turnout ever in the state. This is an important position that requires the necessary experience needed to continue the effective representation in the district. I have that experience and the passion. I have represented numerous people from different backgrounds throughout my legal career. I fight for what’s right and I fight for the people I represent. My focus is on people, and I will represent their issues and their concerns in Austin. I will support teachers, advocate for veterans and seniors, help local businesses flourish, serve as the voice for women and children at the capitol and be a proud advocate and ally for the LGBT community. I will listen to my district and reach out to the community so that we can work together to make House District 124 stronger and successful. This is a team effort and I would be honored to serve as the next State Representative of House District 124.

Editor’s Note: Ina Minjarez won the April 21, 2015 special election and is running for re-election in the November 8, 2016 election.

Ivy Taylor shows up at fundraiser for LGBT youth

Interim Mayor Ivy R. Taylor paid a neighborly visit to the home of Keith Wichinski and David Willet, her next...