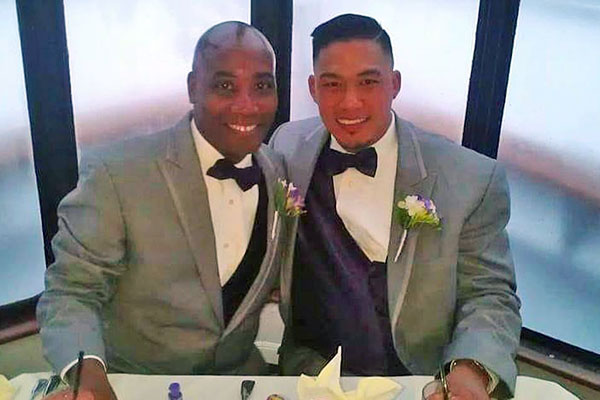 Anthony Brooks and his husband, Phillip Tsai-Brooks. (Photo via Facebook)

Anthony Brooks, a three-term city councilman in the San Antonio suburb of Live Oak, and Phillip Tsai-Brooks, his husband, died two days apart after contracting the coronavirus. The couple had been married since March of 2014.

The couple are survived by Tsai-Brooks’ mother, who lived with them and has also tested positive for the virus, according to reporting by WOAI-TV.

Alfred Tsai, Tsai-Brooks’ brother, told WOAI, “It’s very hard. We had to arrange for my other brothers that live in San Antonio to stand outside the house while we tell her the news. That’s the heartbreaking side. We can’t go in. My brothers can’t go in and comfort her. She’s standing in the doorway crying.”

In a report by NBC News, Tsai-Brooks went to the emergency room in late March with low oxygen levels, a low heart rate, and shortness of breath, among other symptoms. Meanwhile Brooks was bedridden at their home, having been diagnosed with pneumonia. Both eventually tested positive for COVID-19.

Aside from his city council duties, Brooks was a veteran who worked at the Army Medical Command at Joint Base San Antonio – Fort Sam Houston. According to his Facebook page, Tsai-Brooks was the owner of Extreme Opulence Hair Studio. A report in the San Antonio Express-News  said he was also on the board of the Live Oak Economic Development Corporation.

The Mayor of Live Oak, Mary Dennis, issued a statement saying, “The void in the leadership of the council and corporation will be notable. We are forever grateful for both Anthony’s and Phillip’s service to our Live Oak Community and to our country. May God Bless their family and all who were blessed to call both men ‘friend.’”

“Tony Brooks and Phillip Tsai loved each other so much, and they left this world together. It’s a love story that ended too soon in this world, but in heaven, it will last for eternity,” Alfred Tsai told the Express-News.

Services are pending at M.E. Rodriguez Funeral Home. A GoFundMe page has been started to help the family with funeral costs.

Originally published in the San Antonio Current. With the pandemic making masks this season's must-have accessory, it was inevitable that...