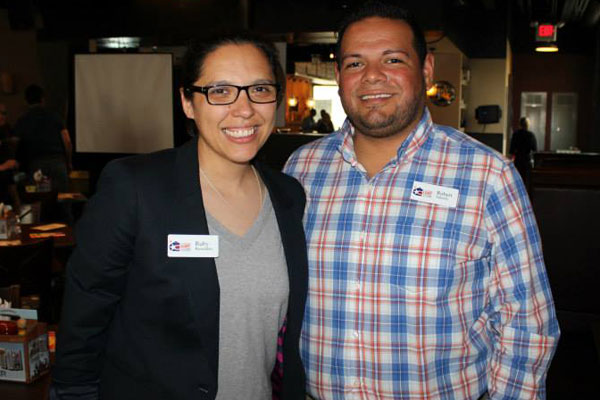 SA LGBT Chamber of Commerce officers Ruby Resendez and Robert Salcido each completed national leadership training programs this year. Ask them about it at this month's Chamber mixer.

Activists from San Antonio are representing the city’s LGBT community at political campaign training provided this summer by the Gay & Lesbian Victory Institute and Yale University.

Robert Salcido, who works as the San Antonio field organizer for Equality Texas and sits on the boards of the LGBT Chamber of Commerce, Pride Center SA and the LGBT LULAC chapter, recently completed candidate and campaign training in Jacksonville, Florida as part of the Victory Institute’s Victory Empowerment Fellowship.

According to the Victory Institute’s web site, “The Victory Empowerment Fellowship is for LGBT leaders of color and transgender leaders who seek to expand their campaign skills and policymaking power and be part of a strong cohort of movement leaders from across the country.”

“It was intense,” Salcido says of the training. “I would definitely recommend it to anyone considering running for office or being involved in a campaign.” In addition to the training, Salcidio will be paired with a politician as part of the Institute’s year-long mentor program.

Other San Antonio graduates of the Victory Institute include former City Councilwoman Elena Guajardo, who took the training prior her District 7 campaign in 2004. Guajardo was also endorsed by the Victory Institute and got help with campaign fundraising. Another alumnus is Chris Forbrich, who took the training in 2010 before running for City Council District 1.

The Victory Institute training will be offered in San Antonio from July 30 to August 2. Anyone interested in taking the course can fill out an application via the organization’s web site using this link. Another training is scheduled in November in Las Vegas.

Ruby Resendez, the former president of the San Antonio LGBT Chamber of Commerce and managing partner at Cilantro Creative, is in New Haven this week attending the Women’s Campaign School at Yale University.

The Yale program offers non-partisan, issue-neutral leadership training that focuses on “increasing the number and influence of women in elected and appointed office in the United States and around the globe.” The Women’s Campaign School is celebrating its 20th anniversary this year.

The program lasts five days during which participants are put through an intense immersion program designed to teach campaign skills, strategic assessment, and improvisation.

“In 2014, the Women’s Campaign School at Yale University trained 70 women, many of whom DO want to run for elected office. Our goal is to prepare them for this arduous process by emphasizing, above all else, that a deep sense of self, sanity, and high self-esteem must be developed prior to engaging in the often insane and chaotic political battle,” says Patricia Russo, the program’s executive director.

San Antonio attorney Rosie Gonzalez took the Yale training in 2007 and has subsequently served on the campaign school’s board of directors and assisted with media training. She says the program offers “the skills to run a campaign at all levels and encourages participants to have the courage and confidence to make the decision to run.”

“I made contacts with other women leaders from across the state, country and the world. Friendships and alliances forged many years ago are alive and kicking today,” Gonzalez adds. “Since my attendance, I have recruited no less than 15 San Antonio Latinas to also attend.”

In an email announcing her participation in the Yale training, Resendez said the experience will help her decide “if this is the right direction for me. Either way,  I will have this information to share with others and work in the front or back lines effectively.”

In order to help defray the cost of attending the Yale program, Resendez started a Give Forward page where friends and supporters can help with funding. Use this link to make a donation.