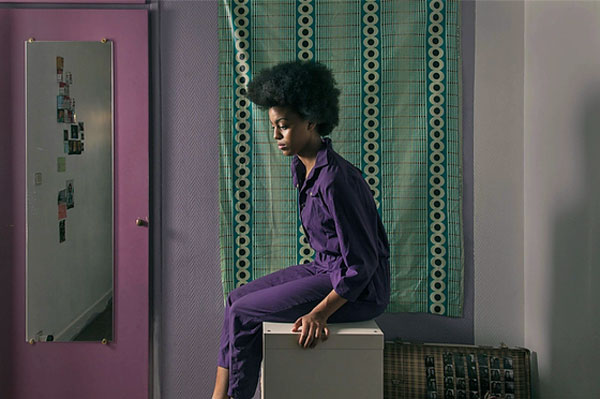 In the wake of Kathy Griffin’s recent photo scandal, involving the fake severed head of President Donald Trump, artists around the country continue to speak out against the anti-immigrant and non-inclusive policies of the president’s administration.

While most can agree that Griffin’s staged photo of a beheading crosses the line of decency, it no doubt raises the question of an artist’s role in society and the effectiveness of art to bring about social change and progress. Four local exhibitions are responding to the current political climate by celebrating diversity. Each artist’s emphasis on our basic humanity  becomes a way to counter the negative effects of bigotry and division.

There is still time to catch this exhibition which closes on June 17. It is curated by Susan Oliver Heard and features 11 artists, both local and international, whose work addresses the intersection of femininity and feminism. Among the artists are Lalla Essaydi whose work focuses on women’s issues within the Muslim world and the Paris-based artist Laura Stevens who reveals the enduring strength of women through her photography. This summer, Artpace presents exhibitions by two German-born artists who compare their experiences living in a divided Germany during the 1980’s to their current lives in South Texas. The Mainspace Gallery (formerly the Window Works Gallery), features Doerte Weber’s Checkpoint. The work consists of large hand-woven panels made from cotton and recycled plastic bags. Reaching nearly 15 feet in height, the panels have an imposing presence within the tight gallery space and resemble the sections of fence that separate the US-Mexico border. A version of Checkpoint was temporarily installed along the Rio Grande River before making its way to Artpace.

The Hudson Showroom features Sabine Senft’s Borderline Reality. Here, the artist uses everyday objects, as in her “river of candy” to reflect on the realities of migration and a divided nation. “The candy symbolizes the sweeter life that migrants are looking for when they cross the border,” Senft said during a media preview. Crossing Borders is a “postcard show” and fundraiser for the Refugee and Immigrant Center for Education and Legal Services (RAICES). The exhibition “seeks to celebrate the immigrant spirit that is part of the American story, raise awareness about the immigrant and refugee crisis, and strives to help those affected.” Each work will be sold for $50. Nascent|Nation, an exhibition of visual and performance art first presented with spectacular results in April, returns for a repeat showing on Saturday, June 10. The project is curated by dancer Tamara Adira and violinist Darian Thomas who are members of the local flamenco troupe Arte y Pasión. Thematically, the installations consist of works which explore the realities of living as a minority in the United States. In Estrellas, Adira reflects on her Jewish American identity through song and dance. While not an art exhibition in the traditional sense, Nascent|Nation demonstrates what it’s like when a group of artists and musicians take a spectacle usually meant for the stage and bring it within the confines of an art gallery. Much like their work in Arte y Pasión, Thomas and Adira’s Nascent|Nation is experimental in nature and visually stunning. With racial tensions on the rise, thanks in part to an administration that seems to revel in anti-Muslim, anti-immigrant sentiment, Nascent|Nation is a reminder of the healing power of art and a testament to the endless possibilities when art and music collide. #queergrito 3.0 is a group exhibition by LGBT artists in response to the current political climate. The show is “queerated” by Gianna Rendon, Penny Boyer and Eliza Perez and is part of the Esperanza’s Peace and Justice Center’s 30th anniversary celebrations. Esperanza 3.0, an exhibit within the exhibit, will highlight the Esperanza’s history through relevant newspaper headlines and archival video.

Pride San Antonio has named two transgender boys as Grand Marshals of the Pride Bigger Than Texas Parade slated for...