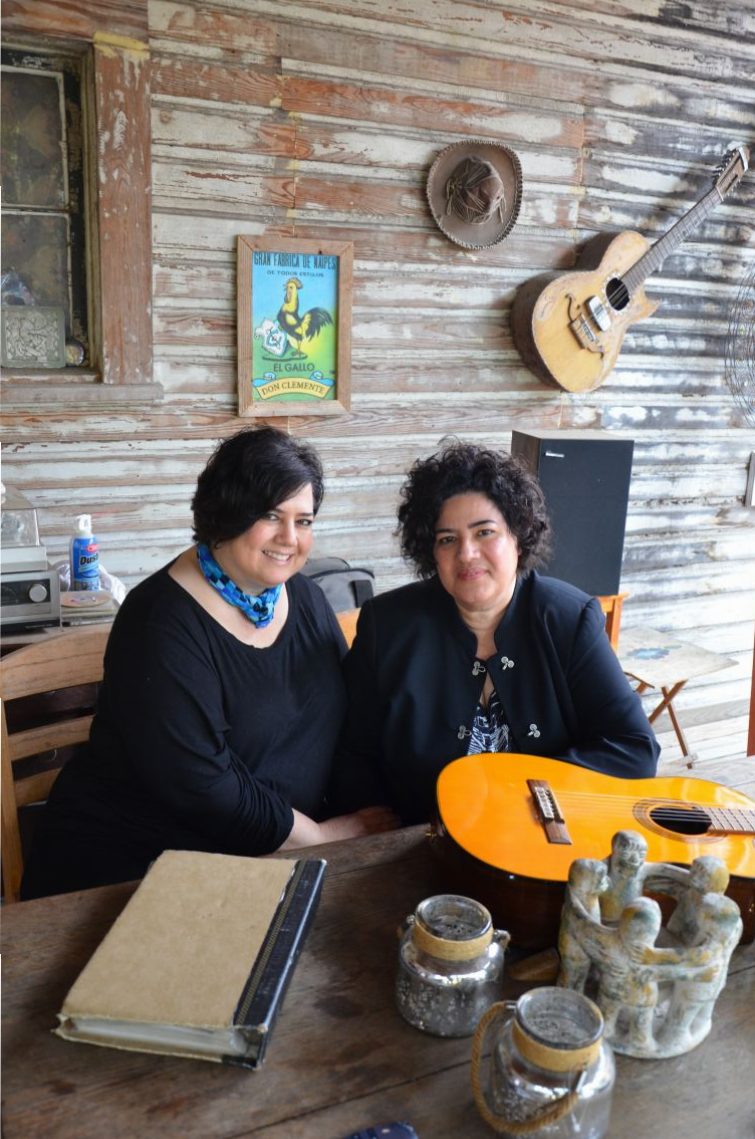 It all started when she declared, “I have to sing” following a Mercedes Sosa concert at Bass Concert Hall in Austin in 1992. Lourdes Pérez, out poet, musician and activist, made the declaration to her now-wife and manager, Annette D’Armata. Now married for 27 years, they said they would give the music venture 100 percent effort for three years, which has turned into 25.

Now Pérez is in the studio working on her latest album, title pending. The album, focused on telling stories of the Westside of San Antonio, is a result of recognition she’s received from her previous work. Her previous albums each have their own defining themes, such as politics, migration, identity, human rights, dance and theater, and añoranza (longing). With a voice reminiscent of Édith Piaf (though unapologetically her own), Pérez recorded her first studio album, Vestigios, after meeting queer Tejana icon Gloria Anzaldúa. Moved by Anzaldúa’s book, Borderlands/La Frontera, Pérez struck up a collaboration with Irene Ferrera, one of the only other out Latina lesbian cantautoras (singer-songwriters) at the time. D’Armata has been with her throughout the entire journey.

Beyond acting as Pérez’s partner and manager, D’Armata explains she’s been “whatever Lourdes needed at the time. At different stages, that has meant different things” — including marketing and sound logistics at the beginning of her career.

The two have always maintained a creative partnership. And Pérez even supported D’Armata when she went back to school; D’Armata is now a naturopathic physician. As for balancing work and love, their personal partnership seems essential to their professional relationship. “Life is short; why should we spend time being apart?” D’Armata asks. “We like working together.” And working together seems to be going well. Pérez’s first album was compiled from live recordings as it was too expensive to record in a studio. In 1995, they met Joe Treviño at Blue Cat Studios and have been recording there ever since.

While each album follows a different theme — some more social justice-oriented than others — many of them include collaborations (Ahmad Kaabour, Eva Ybarra, Miriam Pérez, and May Nasr among them) and are inspired by the music of Pérez’s childhood.

“I was raised in Puerto Rico, in San Sebastián,” Pérez says. The music and art there “derives a lot of inspiration from nature, stories, people, events, history … The music I grew up with was infused with political awareness, honesty, telling the truth about something.” This emphasis on truth-telling and awareness is evident in her work and continues to influence her. “It’s honest music,” she says. “It’s what you see, and what you are able to witness, document, and it’s to be a part of something.”

Pérez says that her collaborations with artists from different parts of the world bring up the necessity of international connections. She finds it important to look at what it means to have a similarity to someone who sees the world differently. “Finding those points of connection are very important and have been in my music.”

In her book Dulce Vigilante: Remembranzas de la Región Oeste de Puerto Rico, Pérez took stories from her mother, and wrote poetry and music inspired by those stories. In addition to a companion CD and English translations, the book includes illustrations by her niece. “It’s three generations of women,” Pérez says.

And while she is best known as a musician, Pérez is no stranger to poetry. “I grew up in a town with very rich improvisational traditions,” she says. Her father would take her and her sisters everywhere, including places where mostly men developed their craft in improvisational poetry. That’s where the décima comes in. Décima is an often-improvised form of poetry that follows a 10-line stanza and a specific rhyme scheme. Although décima is male-dominated, Pérez says “there have always been women … but you never see them out.”

Pérez drew inspiration from Guillermo Velasquez — “one of the best décimistas from Mexico.” Velasquez infuses politics into his poetry, bringing the tradition to life. “I felt very inspired by seeing his craftsmanship to embrace the décima again and learn it,” she says.

But she left Puerto Rico in 1993. “Broken heart,” she says. “No outlet for gay [culture] … homophobia.” She also needed to see other things, and was unhappy with the master’s program in psychology she was enrolled in.

And even as the political climate — domestically and internationally — has changed, her music remains political. “We don’t separate the personal from the political,” Pérez says. It’s clear that, to Pérez, her music is not just a creative outlet or hobby, but a necessary avenue for discourse. It is political and essential; it is political because it is personal. That synthesis of the political and personal is what drives her newest project. She and D’Armata have a history of working with organizations in San Antonio, including SAY Sí, Jump-Start, the Guadalupe Dance Company, and the Esperanza Peace and Justice Center. She’s taught songwriting workshops at the Esperanza, and now she’s working with them to tell Westside stories through song. Similar to the book she created from her mother’s stories, the Westside project involves interviews with elders and collaborations with musicians. Working with Westside residents between the ages of 60 and 90-plus, Pérez is turning their stories into songs influenced by the music of the 1930s, ’40s and ’50s. The interviewees themselves will also influence the music, so that the songs best suit them and their stories. The collaborations include musicians such as Eva Ybarra, Henry Gómez, Flaco Jimenez, Tish Hinojosa, and Max Baca, just to name a few.

“The exciting part is working with people to tell a story,” Pérez says. “People are very happy that their story is being told, and to extract a song that honors them is really beautiful.”

Idina Menzel on Touring, Motherhood and Transitioning from Broadway to Pop

Idina Menzel rose to prominence in 1996 when she originated the role of Maureen in Jonathan Larson’s Tony- and Pulitzer-winning...