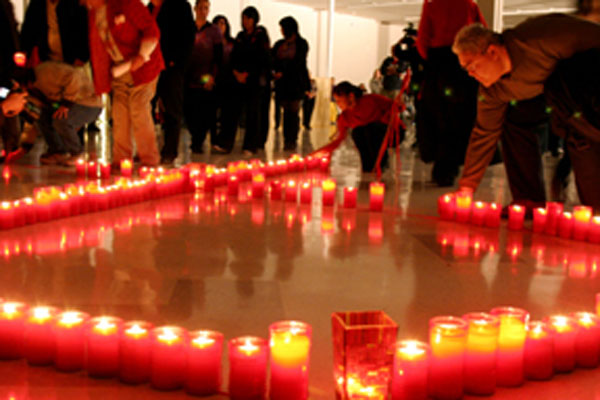 World AIDS Day is December 1 and is marked with observances around the world including San Antonio.

According to Texas Department of State Health Services there were 5,477 people living with HIV in Bexar County in 2014.

Activists say World AIDS Day reminds us HIV has not gone away. There is still a need to raise money, increase awareness, fight the stigma and improve prevention efforts.

Tuesday, December 1
World AIDS Day Gathering of Remembrance and Hope
An informative and entertaining evening that celebrates life, remembers those we’ve lost to HIV, and connects everyone who has been impacted by HIV/AIDS. Presented by the San Antonio World AIDS Day Collaborative.
Free HIV and STD testing from 4 to 6 p.m. Social gathering from 6 to 7 p.m. Service from 7 to 8 p.m. At the Fiesta Room, Coates Center, Trinity University.

Tuesday, December 1
World AIDS Day Art & Music Festival
In honor of World AIDS Day, the Center for Health Care Services is sponsoring an art and music festival as an “uplifting day of remembrance” for those lost in the fight against HIV/AIDS and those affected by HIV/AIDS. There will be live performances as well as an art show and live demos.
7 to 11 p.m. at Brick at Blue Star Arts Complex, 108 Blue Star. More information at this link.

Thursday, December 3
Red Balloon Release
The San Antonio AIDS Foundation invites the public to join in a celebration of life and remembrance of those lost to HIV or AIDS. The gathering will take place at the SAAF main office and will include a few short words of remembrance and an opportunity to share names of loved ones. Balloons will be provided. All are welcome.
11:30 a.m. at the San Antonio AIDS Foundation main office, 818 E. Grayson St.

Saturday, December 5
Amaya’s Feast in the East: A New Conversation
Amaya’s Cocina is presenting a fundraiser for the San Antonio AIDS Foundation. The menu will feature a carne asada taco with a winter salad, BBQ chicken and churro waffle with platano crema, barbacoa benedict with winter hollandaise, and Cajun shrimp and grits with a fried egg and chorizo dust. Each menu item is $10. Diners can also enjoy bottomless mimosas with a donation.
From 11 a.m.to 3 p.m. at Amaya’s Cocina, 1502 E. Commerce St.

With World AIDS Day approaching on December 1, recent statistics from the Texas Department of State Health Services show a...