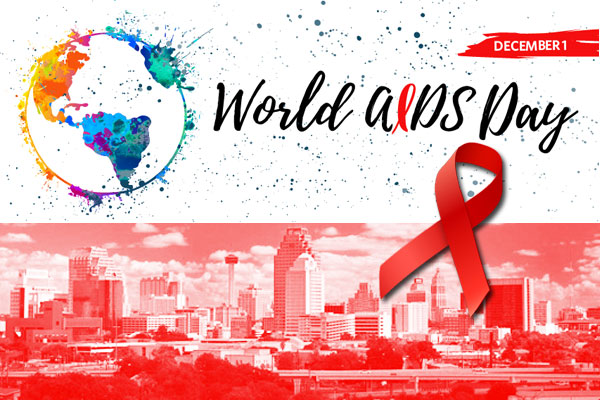 The global observance of World AIDS Day on December 1 serves as a reminder that San Antonio has what the San Antonio Metropolitan Health District describes in a report as, “a stubbornly high rate of new infections, and widespread stigma and lack of knowledge about HIV/AIDS.”

Globally, there are an estimated 36.7 million people who have the virus. More than 35 million people have died of AIDS, making it one of the most destructive pandemics in history.

The observance of World AIDS Day began in 1988 and is billed as an opportunity for people worldwide to unite in the fight against HIV, to show support for people living with HIV, and to commemorate those who have died from an AIDS-related illness. The theme of this year’s observance is, “Know Your Status.”

The prevalence of HIV in San Antonio is particularly pronounced. Metro Health estimates that in 2017 there were approximately 6,000 people living with HIV in Bexar County.

“In the past five years, the HIV epidemic has expanded in San Antonio, particularly among young gay and bisexual men. San Antonio is home to the largest ‘hot spot’ of new HIV infections in the United States,” Metro Health reported in an email.

Other statistics provided by Metro Health offer a profile of the epidemic in the San Antonio area.

Last year, the city joined the Fast-Track Cities initiative, a global partnership between the City of Paris, the International Association of Providers of AIDS Care, the Joint United Nations Programme on HIV/AIDS and the United Nations Human Settlements Programme in collaboration with local, national, regional and international partners and stakeholders.

Local observances of World AIDS Day in San Antonio have been held throughout the week at the San Antonio AIDS Foundation, the Thrive Youth Center, Unify SA and other locations.

The San Antonio Metropolitan Health District STD/HIV Progra will host a World AIDS Day 2018 Service of Remembrance event on December 1 at Woodlawn Pointe. The event will serve to remember the lives of individuals lost to HIV/AIDS, support those currently infected and connect attendees with resources to increase awareness about HIV and other STDs.

Sheryl Sculley's November 29 announcement that she will retire after a 13-year tenure as San Antonio's city manager is a...