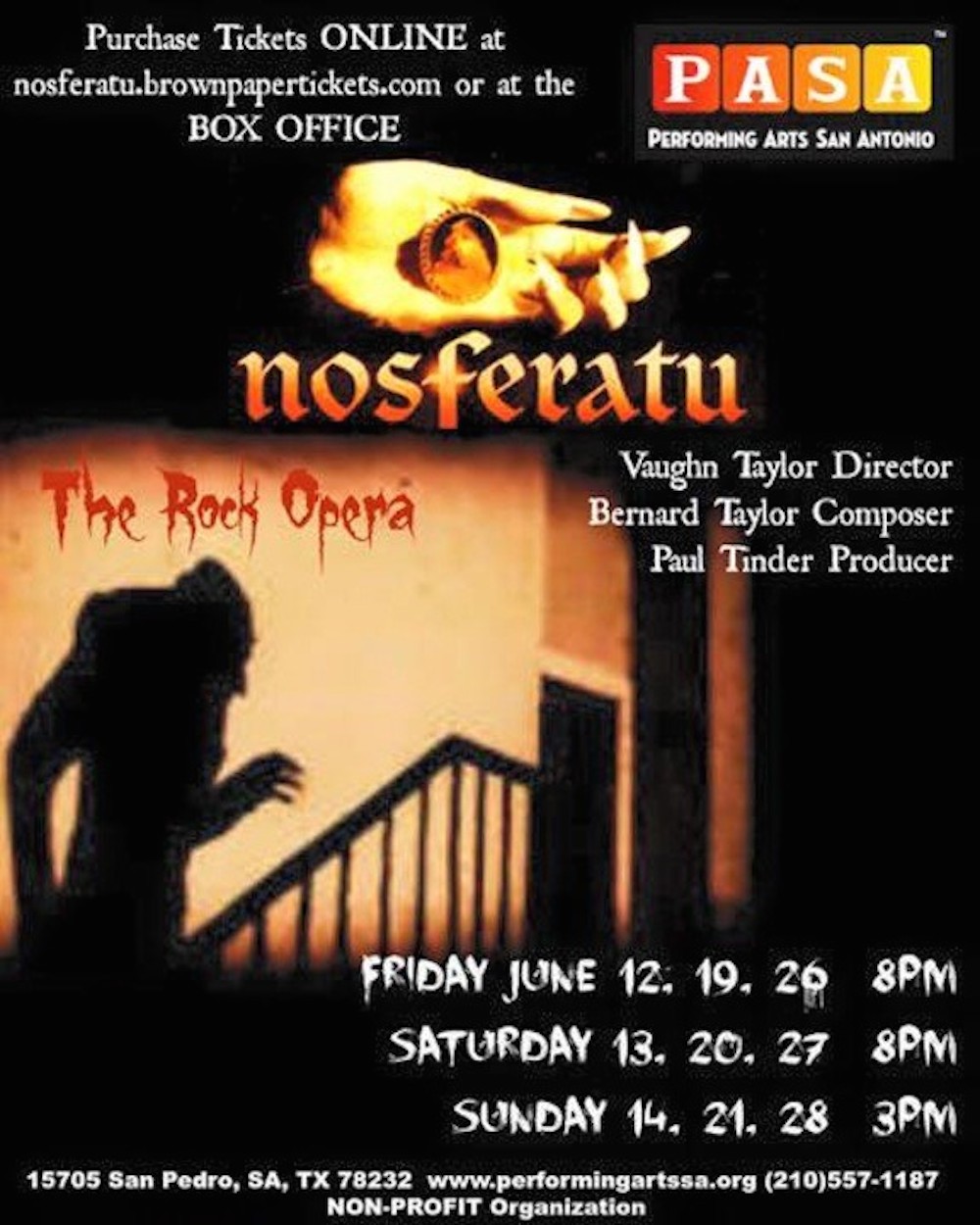 Bernard J. Taylor is the San Antonio based composer and writer behind Performing Arts San Antonio’s upcoming production of “Nosferatu” the Rock Opera. He has written and composed twelve musicals performed around the world, but his stage productions aren’t the only sources of drama in his life. Taylor’s love life is perhaps just as interesting as the stories told in his plays and musicals.

Although Taylor and his partner Jerry White have been settled together for the past five years, it took quite a bit of time for them to get to this point.

“He often says I came across time and space to find him,” Taylor said of White when reflecting on how they came together.

The story, spanning ten years, is one that could easily inspire a play or film. Taylor, who is originally from South Africa, first met White in 2000 when he was putting on a production of his play Liberty! in San Antonio. He married in 2002, but stayed in touch with White over the years. When Taylor’s marriage (which he described as more of a friendship than a romantic relationship) ended, he found he still thought of Jerry. After White’s partner passed away in 2010, Taylor returned to San Antonio looking to stage a play. He moved in with Jerry when he arrived and the two have remained together since.

“It was something a little unexpected, but when he called I was receptive to it. It was very nice to still have someone interested in the same person after so many years,” White recalled.

“I was always distracted by other things, but now I’m much more content with life in general. I’m finding that I’m with the right person and it allows me to pour more of my energies into my creative work,” Taylor said of White’s influence on his work.

While his relationship with White has been a positive influence on Taylor’s creative work, he has another interesting story to tell involving both his love life and his upcoming musical.

It was a rather unique woman Taylor once dated who inspired him to write Nosferatu into a musical in 1995. Taylor described her as very beautiful, highly intelligent, and highly sought after for both of those attributes.

“The fact that she walked out of school and refused to go back because they wouldn’t teach the poetry of William Blake- I cant think of anybody else who would do that kind of thing… She was a person of great passion,” he recalled.

The woman also didn’t speak until she was five years old, and what’s more, she only spoke in full sentences. “She was really strange in many ways. She was very withdrawn socially, except for with me…I think she may have suffered from some kind of autism, Asperger’s maybe. She didn’t really relate well to other people.”

A fan of the silent film Nosferatu, it was the woman who suggested Taylor write a musical version. He dedicated it to her and her mother produced the show. It was after this point that the family became very demanding of Taylor and after two years together, he ended the relationship. The woman moved on, but never forgave him.

With such an interesting character, it seemed to me that the woman, like Taylor and White’s love story, was worthy of a creative interpretation herself. So many years later, however, it is clear that the most meaningful product to come of the relationship is the musical, which has received praise from reviewers and opens this Friday.

Riding the wave: Judge Robert Pitman on his appointment to the federal bench

Former U.S. Attorney Robert Lee Pitman was invested as federal judge for the Western District of Texas in San Antonio...