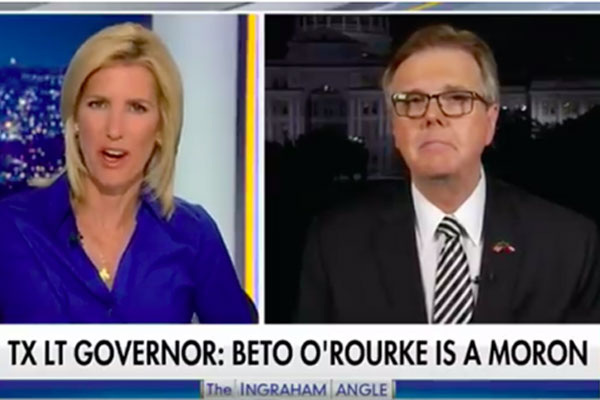 During a Fox News interview, Lt. Gov. Dan Patrick — who has a habit of making provocative statements on national TV — used a term usually construed as an anti-gay euphemism to describe Democratic presidential candidate Beto O’Rourke.

“He is so light in the loafers he floats off the ground at times,” Patrick said during his Monday night appearance on Laura Ingraham’s show. Patrick, a Republican, also called the former El Paso congressman a “moron.”

Ingraham quickly gave Patrick wiggle room after he used the potential slur. “Now, Dan, when you said ‘light in the loafers’ you just meant ‘not consequential,’ correct?” she asked.

“He flaps his arms a lot,” Patrick floundered, adding that O’Rourke is “flying up.”

Of course, the old arm-flapping defense might be a little easier to buy if Patrick hadn’t spent the 2017 Texas legislative session championing the anti-transgender “bathroom bill” or this session pushing for a measure that would let licensed professionals discriminate against LGBTQ people on “religious grounds.”

Apparently concerned his on-air explanation wasn’t enough, the lieutenant governor went on Twitter Tuesday afternoon to further explain himself. The comment, he argued, signified that O’Rourke is a “lightweight with no public policy substance.”

Patrick added that he stands by his remarks — because of course he does. Even so, he threw in an offhanded apology to anyone who “took a different meaning.”

State Rep. Garnet Coleman (D-Houston) held a press conference at the State Capitol on April 29 to announce he is...