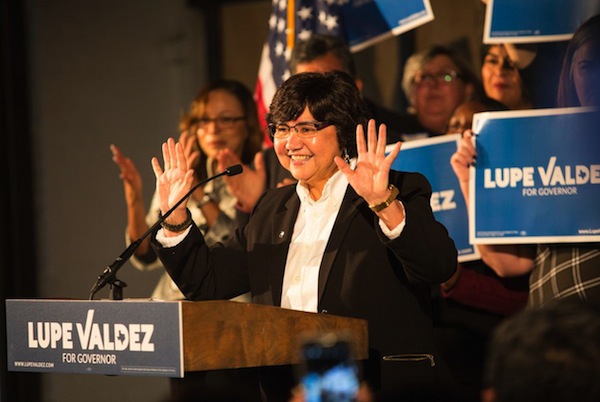 Lupe Valdez, former Dallas County Sheriff, speaks during a kickoff event for her 2018 gubernatorial campaign in Dallas on Jan. 7, 2018.(Photo: Laura Buckman for The Texas Tribune)

DALLAS — Lupe Valdez, the former Dallas County Sheriff, formally launched her Democratic bid for governor on Sunday, touting a campaign aimed at representing all Texans and listing a broad range of topics she plans to address as election season gets underway.

“Together, we need to build something new — a new Texas,” Valdez told a crowd of supporters here. “Opportunity should be as big as the Texas sky.”

Valdez, 70, announced late last year she was entering an already crowded and potentially competitive primary field. Ten Democrats are vying to face off with Republican Gov. Greg Abbott in the November general election, including Valdez and Andrew White, the son of late Gov. Mark White. The eventual Democratic Party nominee faces long odds to unseat Abbott, who has a $40 million-plus war chest for re-election.

In her speech, Valdez knocked state lawmakers over their 2017 legislative session — referring to them as “people who were supposed to be serving us doing more harm than good” — and mentioned the state’s overcrowded classrooms and raising the minimum wage as issues she hopes to address as governor.

“The special interests in Austin continue to cook up fake ideas behind the curtain,” she said, referring to failed legislation that would’ve regulated which public restrooms transgender Texans could use and the anti-“sanctuary cities” bill that Abbott signed into law in 2017 as measures that are “certainly destroying the Texas brand.”

She also brought up Dreamers — undocumented immigrants who were brought into the country as children by their parents and who were granted relief from deportation under an Obama-era program — who she said are facing an uncertain future in Texas as Congress works to hash out a solution.

“Dreamers and their parents must be able to achieve their goals in the land that they’ve always considered their country,” she said. “We must educate to elevate.”

Valdez has kept a low profile since she announced her candidacy late last year. Her rollout was simple when she filed for office at the Texas Democratic Party headquarters in Austin. After signing paperwork, delivering brief remarks and taking a few questions from reporters, she excused herself to catch a flight.

Valdez, who drew national headlines when she was first elected in 2004 as the nation’s first openly gay, Hispanic sheriff, was serving her fourth term when she formally stepped down from the post. The Dallas County Sheriff’s Office oversees the second-largest county jail in Texas.

“I’m running because I want be the people’s candidate and bring back common sense to government. I want to be the candidate who makes the difference for Texans — all Texans,” Valdez said as she wrapped up her speech. “We must be that campaign.”

Nigel Garrett from Frisco, Texas has been sentenced to 15 years in jail for federal hate crime and conspiracy charges...