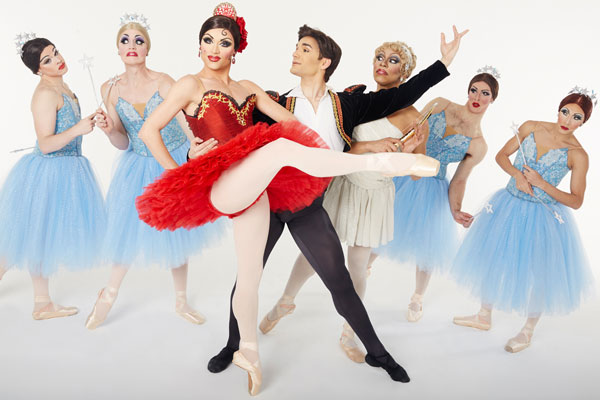 Les Ballets Trockadero de Monte Carlo, which bills itself as “the world’s foremost all-male comic ballet,” is heading to San Antonio for a performance on January 25 at the Tobin Center for the Performing Arts.

The “Trocks,” as the troupe is known to its fans, was founded in 1974 by Peter Anastos, Natch Taylor and Antony Bassae who produced small, late-night shows in venues which were off the beaten track.

After a receiving a rave review by Arlene Croce in The New Yorker and other glowing notices in the New York Times and the Village Voice the troupe established itself as an artistic and popular success.

By the mid-1970’s, with articles in publications such as Variety, Oui, and The London Daily Telegraph, the Trocks became an international sensation, performing in over 500 cities and 33 countries worldwide. Despite their comic approach, the troupe performs the full-range of ballet and modern dance with the intent of showing off each performer’s technical skills. The dancers portray both male and female roles.

According to their press materials, “The comedy is achieved by incorporating and exaggerating the foibles, accidents, and underlying incongruities of serious dance. The fact that men dance all the parts–heavy bodies delicately balancing on toes as swans, sylphs, water sprites, romantic princesses, angst-ridden Victorian ladies–enhances rather than mocks the spirit of dance as an art form, delighting and amusing the most knowledgeable, as well as novices, in the audiences.”

Originally published in the San Antonio Current. The confirmation of a Texas federal judge nominee who's said transgender kids are...