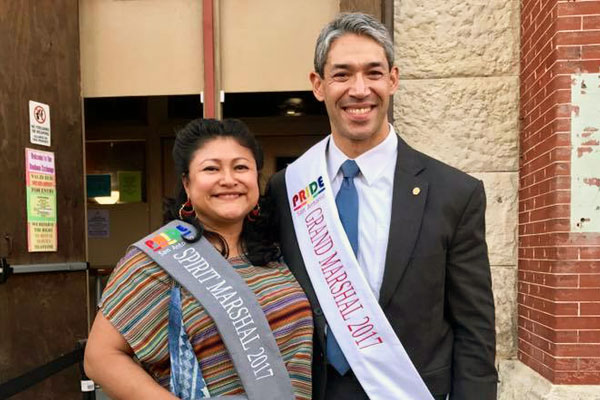 Mayor Nirenberg and his wife, Ericka Prosper, attend a Pride Month event. The mayor was Grand Marshal of the 2017 Pride Parade. (Photo via Facebook)

Members of San Antonio Mayor Ron Nirenberg’s newly-appointed LGBTQ Advisory Committee are set to have their first meeting on Thursday, May 31 at the Central Library Auditorium.

The gathering marks the first time the mayor will have the opportunity to meet the 15 members of the committee face to face since they were chosen. Future meetings will be held on a quarterly basis.

In an email to committee members, Maria Luisa Cesar, the mayor’s senior policy advisor and LGBTQ liaison, described the first meeting’s goals: “There are some basic housekeeping items that we need to knock out, in terms of leadership structure, group norms, governance and mission statement. In the future, I think it makes sense for a chair or co-chair of the advisory committee to work in tandem with our office to come up with an agenda together but figured our office could take the lead this first time to get the ball rolling.”

Attached to Cesar’s email was a meeting agenda that included a welcome from the mayor, an introduction to “guiding principals” for the committee, and a list “governance and process decisions” which need to be addressed.

According to a statement provided by the mayor’s office, “The LGBTQ Advisory Committee was created to increase the quality of life for members of the Lesbian, Gay, Bisexual, Transgender, Queer, Intersex and Asexual communities. The committee members will act as a conduit between the LGBTQ community and the Mayor’s office, allowing them to highlight challenges and bright spots within these communities and make policy recommendations.”

Last March, a selection committee comprised of LGBTQ community activists was charged with choosing committee members from almost 200 applicants. A month later, the finalists were sent a letter from the mayor advising them of their selection.

“I am excited to work with this dynamic group to improve the lives of our LGBTQ friends and neighbors,” Mayor Nirenberg said on the day the list of committee members was announced. “This is a historic moment for our city and I encourage everyone to lend their voice to the work that we’re doing.”

A Gay Texas Teacher Is on Leave After She Showed Students a Photo of Her Wife. She Has Few Legal Protections.

By Emma Platoff, The Texas Tribune Stacy Bailey has been employed as an art teacher at Charlotte Anderson Elementary School...