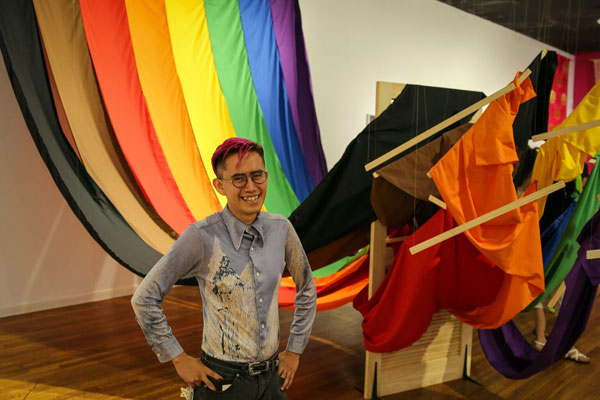 The 22nd installment of the Young [email protected] Artists exhibition at the Mexic-Arte Museum in Austin, Texas brings together eight emerging artists from around the state.

Billed as Young [email protected] Artists: ¡Ahora!, this year’s exhibition is guest curated by Alana Coates, associate director at Ruiz-Healy Art. The show set an attendance record when it opened on July 14.

Speaking to the SA Current, Coates explained that the issues addressed by the featured artists are those “the Trump administration has forced into the national discourse.” Within a context of increased racial tensions under the current administration, the artists here “delve into idiosyncratic negotiations with self, family and society.”

In the installation Courageous, Martinez presents a 30-foot-long hand-woven flag referencing Philadelphia’s controversial LGBT flag that includes black and brown stripes. Born and raised in San Antonio, Martinez is a graduate of the Pacific Northwest College of Art whose work aims to make space for queer themes within the narrative of Chicanismo. In Sin la S, Villalobos presents a series of hanging chandeliers made from cowboy hats, a common item worn by Mexican-American men along the U.S./Mexico border. Born in El Paso, Texas to a conservative Mexican-American family, Villalobos incorporates found objects into his work “to explore the dichotomy of feminine and masculine materials within cultural symbols.”

State Sen. Jose Menéndez issued a statement denouncing the bathroom bill which passed in the Texas Senate on July 25...