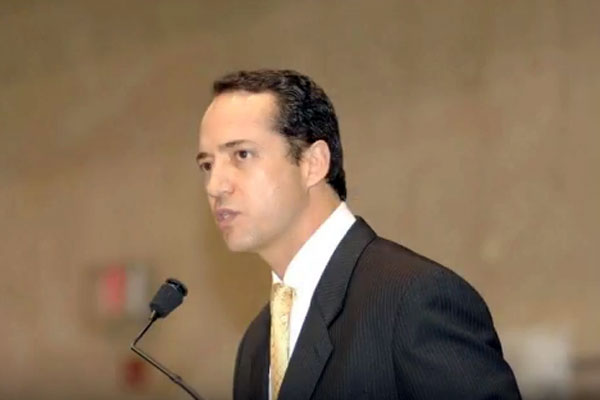 State Sen. Jose Menéndez issued a statement condemning the bathroom bill which passed in the Texas Senate on July 25 and now goes to the House for consideration. (Video capture)

State Sen. Jose Menéndez issued a statement denouncing the bathroom bill which passed in the Texas Senate on July 25 in a 21 to 10 vote after an 8-hour debate.

“I have voted against this bill time and time again and will continue to condemn this offensive legislation in the name of respect and decency for our fellow citizens,” Menéndez said.

Senate Bill 3, which was introduced by state Sen. Lois Kolkhorst, seeks to regulate bathrooms in public schools and government buildings, based on the sex listed on a person’s birth certificate or other forms of state-issued identification. The bill now goes to the House where passage is less assured.

After the Senate vote, Menéndez issued the following statement:

As a Senator, I have an obligation to support legislation that protects our state’s families and our economy. I must also remain vigilant and upfront about urgent matters that jeopardize the very character and economic engine of our city. ‘The Bathroom Bill’, or Senate Bill 3, was introduced into the legislature’s special session amid an outpouring of opposition among leaders, law enforcement officials and residents of our state. This bill would make it illegal for people who are transgender to use public bathrooms that correspond to their gender identity. This assault against basic human dignity is one that is already threatening to cost San Antonio dearly, not just in our sense of decency as a community but in major revenue that keeps our hugely popular city vibrant and competitive. I have voted against this bill time and time again and will continue to condemn this offensive legislation in the name of respect and decency for our fellow citizens.

Another consequence of passing the ‘Bathroom Bill’ is the catastrophic economic threat that it will have on one of San Antonio’s most vital revenue sources. Next year’s NCAA Final Four tournament in San Antonio could have a total economic impact of $243 million, according to a study commissioned by the City of San Antonio. We will lose that revenue if this law is passed. How do we know this? Because it happened in North Carolina just last year. When N.C. passed its own bathroom bill into law, the NCAA pulled the games out, and the losses did not stop there.

Forbes business magazine estimates that N.C. lost $630 million in business, not just from canceled sports events and concerts but from companies that were going to bring jobs to the state and new investments in existing companies. Now that law in N.C. has been partially repealed, but the damage has been done. We can’t afford to go down that road.

Many other national groups that plan to bring tens of thousands of their members to spend money in our city are watching us closely. They are ready to pull the plug and take their events elsewhere if we pass a ‘Bathroom Bill.’ This could cost San Antonio an additional $40 million in lost convention business. If lost revenue to the city isn’t reason enough to oppose this bill, take the word of San Antonio’s Police Chief, William McManus. He has stated that the SAPD has received no reports of sexual assaults involving transgender people in public bathrooms and that this bill is not necessary. The current laws provide adequate protections and penalties against anyone entering a bathroom for nefarious purposes. They also serve as the corporate policy of virtually every Fortune 500 company in the country. The ‘Bathroom Bill’ won’t make Texans safer, but it will hurt the millions of people who rely on caregivers to assist them in public bathrooms. This is an extremely dangerous law for children, seniors and the disabled.

We cannot support a bill that promotes hate and intolerance against an already vulnerable population. That goes against everything we stand for as representatives of this great city. Visitors to San Antonio come back to our city again and again, not just for the great food and the colorful scenery. They come back for the people who open their streets and restaurants and venues with a genuine hospitality, inclusiveness, and tolerance. If we destroy that, we lose everything.

Mack Beggs, an 18-year-old trans boy on the wrestling team at Trinity High School in Euless, Texas has completed the...