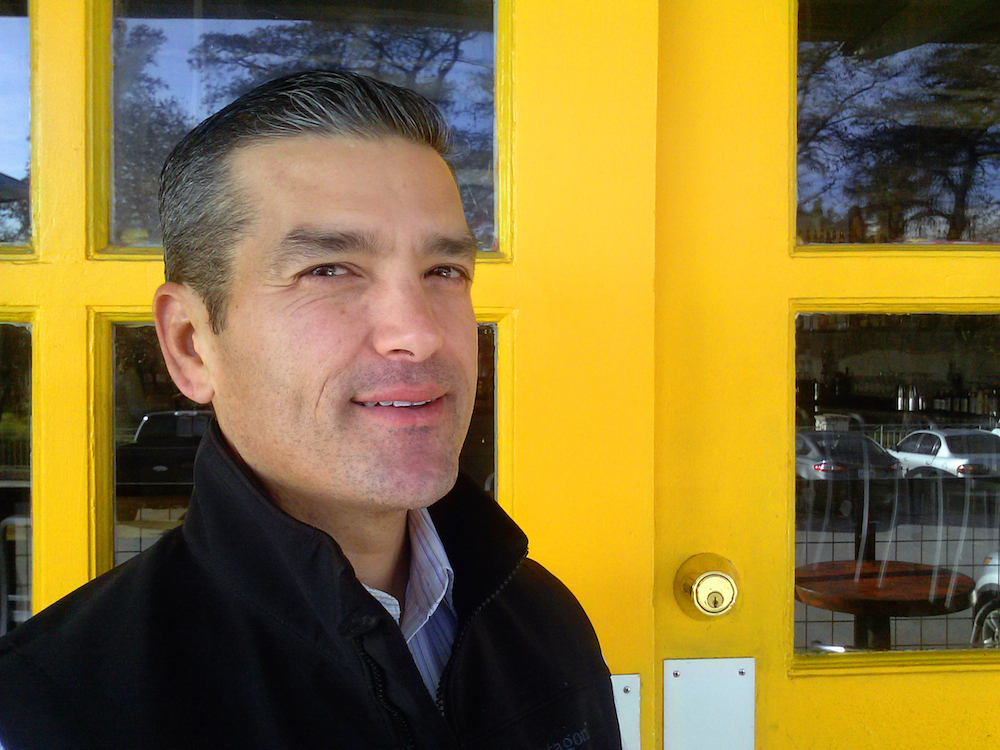 Today, a portion of the small pool of influential SA voters may feel torn about having to choose between former state Rep. Mike Villarreal and former state Sen. Leticia Van de Putte in the runoff-bound race for San Antonio mayor. At a glance, they fall into similar categories: Hispanic Democrats who are unflinching supporters of LGBTQ equality. Some political spectators openly admit that if the mayoral prize were awarded to the candidate who campaigned the longest and hardest, Villarreal would be sitting in the mayor’s office come June. But whether old-school blood, sweat, and tears is still enough to win an election will be revealed this evening.

Villarreal is sitting across from me at Halcyon in Southtown having a light breakfast. During his 15 years in office, he’s branded himself in promotional material as the tireless state rep burning the midnight oil–perhaps in unconscious preparation for this perfect storm.

He remembers the first unexpected gust of wind. It was a beautiful Saturday afternoon last year. “As soon as I read in the newspaper that [former Mayor] Julian [Castro] would most likely be leaving, I sensed this collective concern about what’s gonna happen to the priorities that Julian’s leadership had set.” He thought, “If I’m going to do this. I should come out early and let [San Antonio residents] know that they’ll have someone to place their faith in.”

After six hours of serious contemplation, Villarreal made his decision public.

Although he thinks its “awesome” that Castro was chosen to be a national leader, Villarreal’s own goal “isn’t to rise to national politics. As a matter of fact, I’m entering this race in more a mid-career,” he says. “How many more years do I have in elected public service? I don’t know.”

Although he says he’s proud of his work in state government, he embraces the possibility of spreading his wings.

“I want our city to be a city of opportunity,” he says. “Getting stuff done beats being stuck in a library drafting a bill that will likely have to be watered down. I could chair, but I would never be allowed to author those bills because I’m a Democrat. Coming home I get to just be Mike regardless of party.”

Ideally, Villarreal would love to keep City Hall out of the political fray. “I’ve taken a pledge not to endorse any candidates–forever–as mayor,” he says. He looks to recent mayors for local political precedence. “[Former mayor Phil] Hardberger is a Democrat. Everyone knew that.”

“I remember when [Hardberger] went on CNN and welcomed the people who were evacuating New Orleans during Hurricane Katrina. Elected officials were meant to be the voice of the people,” Villarreal says. “In that moment he spoke for us and the whole nation was watching.”

Hardberger’s administration continues to be remembered fondly. Why do you think that is? I ask.

“You can’t find a more well-read, philosophical, wise man in our community,” Villarreal replies with a somewhat contained enthusiasm. “The other thing going for Phil is that he only had four years in office.” A burst of laugher. “That’s the nature of being in an elected office. The sooner you get out the less likely it will be that you’ll have enemies.”

Villarreal says he only knows one way to run for office and that’s full speed ahead. Adept in campaign culture, he’s created an online newsletter that keeps him in touch with campaign supporters and past constituents.

The to-do list of a man who wants to be mayor is limitless.

And that’s only his online presence. His realtime work is no less intense.

In several pockets of the community, he’s introducing himself to potential voters for the first time.

In a soundbite, his message is simple.

“Strengthening the economy and creating opportunities so we don’t lose our children,” he says. “That’s the most unadorned way I can say it–and preserving the natural beauty of San Antonio.”

“Oh, it is beautiful,” says a voice that catches us both by surprise.

Suddenly, the man who has until now been sitting quietly to my left chimes in. He says he recently moved from Austin  and now lives in Government Hill. He apologizes for interrupting but wanted to say how much he thoroughly likes it here.

A moment to do what Villarreal has been doing since last summer, usually door-to-door, unfolds in front of me. I patiently let it happen as another reporter, Bob Rivard, sits to my right, awaiting his turn with the former statesman.

Are you naturally very patient? I ask.

“I’m not patient,” Villarreal admits with a lingering shake of the head. “I want to move forward. [But] it’s amazing how much can be accomplished just by sitting down with someone. I have touched a lot of people one-on-one.”

An advantage has been his identification with his Latino heritage. How was that introduced to you as something that was important? I ask.

“That’s a big question,” he replies, lightly dabbing his mouth with a napkin. “I wasn’t actively aware of my culture until I went to Texas A&M in College Station.”

“In school, this happened, ‘ … but you’re not reeeaaallly Mexican.” This imitation of one or more of his college classmates is so uncharacteristically hilarious he does it again for me.

At the time, this gave a young Villarreal a lot to think about. What did Mexicans look like and how did they behave? What is being culturally authentic? These years of self-exploration led him to start the first MEChA (Movimiento Estudiantil Chicano de Aztlan) chapter on campus, organize a Chicano art exhibit, and even book the venerable Cesar Chavez as a guest speaker. He observed, among student group leaders, that some were political and some strictly cultural. “It was in college I became more conscious of the inner connections of the two,” he says.

Of course, there were inevitable challenges. Like the time his group organized a boycott. They set up tables in front of the cafeteria and spoke to fellow students about the deplorable conditions for migrant workers. He remembers some of the students would go into the kitchen to grab a handful of grapes and eat them in front of the demonstrators. “It was a hostile environment,” he recalls.

What would you say to those voters who feel they have to choose between you and Leticia? I ask.

“I think the difference between us is that this is my first choice,” he says with mild self-restraint. “It is my highest commitment. I didn’t run for … well, I’ll leave it at that … ”

Tommy Adkisson operates on an ‘inspirational level of energy’