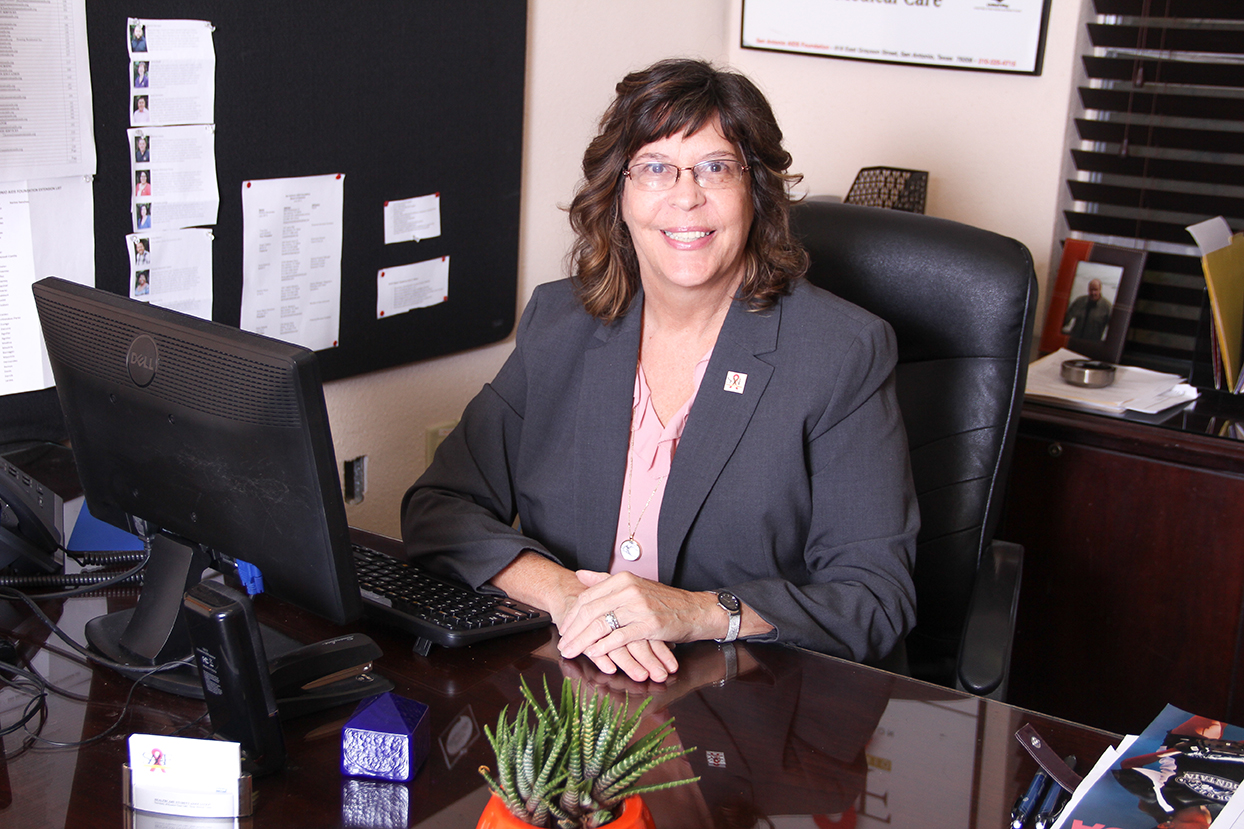 SAAF president Cynthia Nelson photographed by Julián P. Ledezma for Out In SA

“I’m happy to be out there and say that SAAF is alive and well.”

As the San Antonio AIDS Foundation prepares for its 30th anniversary in 2016, the organization announced in October the appointment of its new president, Cynthia Nelson. Founded in the back of a gay bar by Robert “Papa Bear” Edwards in 1986, SAAF has expanded over three decades, providing invaluable services to some of the city’s most underserved and vulnerable populations. After the departure of its executive director of 23 years, David Ewell, in April 2015, the organization survived a series of controversies during its months-long search for new leadership. Just three weeks into her new position as president, Nelson sat down with Out In SA to discuss some of the recent changes at SAAF and the future of the organization.

Your experience with the HIV/AIDS community spans more than 30 years. Can you talk about some of your past roles and how they’ve prepared you for your current position as president of SAAF?

In one of my very first roles, I was the administrative officer in the Department of Medicine at the Houston [Veterans Affairs] Medical Center and that was in January of 1980. In the early ’80s, we started seeing some of the veterans who had these symptoms and we just didn’t know what it was. I had an excellent assistant chief and I was happy to be able to help provide resources so that we could have a group that was focused on what was going on. And then we realized, as time went on, what it was [HIV infections]. [Previous to my current appointment], I returned to the VA with Baylor College of Medicine. I was the chief operating officer for the Health Services Research and Development Center of Innovation. We had four scientific programs, one of those programs was focused on HIV as well as retention and care. I was supervising that and also helping to provide resources for that.

So you have been in this since the very beginning.

For a very long time. And I’ve had many roles in between, which have also prepared me to be in this role today — most of them either clinical-related or research-related. What I loved about my prior position was that it kind of brought everything together. People may not always understand health services; it’s not just a bunch of research that you write a paper about and stick it in a magazine; it’s about things that really matter to you, to consumers, to caregivers and the people that we serve. We went out into the community to make sure there was testing and … to keep people in care. We did all kinds of things: support for people that were dealing with Alzheimer’s disease; we looked at safety and medical records; and how doctors look at giving you test results. And this, as I’m here, this job just brings all that back together.

Ever since the firing of executive director David Ewell, SAAF has been shrouded in controversy, with former board members, employees and volunteers raising concerns about the organization’s leadership. How can you reassure the community that you have their best interests at heart?

In the short time that I’ve been here, I’ve really tried to reach out to a lot of people. It’s not just about me and the things I can do. The staff at SAAF already feels happy; they feel that they can just get back to doing their job. And I’ve really enjoyed the community outreach and trying to get out there and meeting people.

The Founder of SAAF, Robert “Papa Bear” Edwards, had this to say recently about the leadership at SAAF: “Jack Downey and Anne Marie Simmons have destroyed the SAAF I created, and my disdain for them is immense.” How do you plan to rebuild some of the trust that was lost with the community during this recent transitional period?

Just being here the past few weeks, I certainly don’t see that the Foundation has been ruined. I came in and found a good group of very dedicated staff. They believe in the mission; that’s partly what drew me here. Some of the people who are here had left and then came back. That says a lot about the organization. I just feel the sense that they really want to work with me as a team. There is a rich legacy; we are having our 30th anniversary [in 2016]. I wasn’t here with Jack [Downey]; I wasn’t here with David [Ewell]. I believe the board did the right thing: They went out and did a search and I’m the result of that search. They went out trying to find a good leader. I know they interviewed a lot of people and they really did their due diligence. They all could have run — the board and volunteers. I don’t know if I could have withstood that pressure but they stood through it. And I think they should be commended.

One of the low points this summer was when interim executive director Jack Downey, in a heated confrontation with an SAAF volunteer, was seen on camera responding to him by saying “up yours.” It seems this was the boiling point that reflected the community’s frustration with SAAF’s leadership at the time. How do you plan to open up the lines of communication with the community?

I hope to be out on the circuit soon. I hope to be meeting with city council. I reached out and spoke to Lady Ray Romano at United Way of San Antonio and Bexar County and they seem very happy. I just attended a community meeting at San Antonio Food Bank. We’ll be meeting with the BEAT AIDS group. We talked with Haven for Hope. We are happy to get out there; I’m happy to be out there and say that SAAF is alive and well.

I think one of the biggest concerns was what seemed to be reluctance by the SAAF board of directors to talk about this new direction it is going in. Can you talk about some of the changes and future plans for the Foundation?

If I put myself in their shoes, I would say they wanted to partner with a new leader first and then we could talk about a new direction. People ask: What does a board do? Well, the board sets a programmatic area and then we, the foundation staff, are to carry that out. But they don’t really meddle in the day-to-day things. They just sort of give us a framework and support the mission. So that’s what I’m going forward with. I’m really looking at everything. I could say a little bit of my vision — what I see as exciting to me — is to expand a lot of our testing. And also what I see as the next need: linking testing to early intervention. So we need to get people into care, and retain them in care and do a lot more prevention education. We are hopefully going to build an onsite outpatient clinic; we have an onsite pharmacy coming. We are working with University Health System, hopefully, on a new site where we will all be back together again. It was announced over the summer that SAAF would be moving several long-term patients out to various nursing homes around the state. Are you still moving patients out?

What I’ve been emphasizing is that our regulations and our licenses say we are a specialty-care facility. And it also says that when someone is admitted, there is a treatment plan and a discharge plan. We are not licensed to be a nursing home. Thank goodness the treatment of the disease has progressed so that people are living longer and much healthier lives. Our goal is to help stabilize their medical condition so hopefully they could transition over. We have Carson House, where they could stay for three months. Or, if they need further care, that’s all a medical decision decided by our utilization review team. That is supposed to be looked at when a patient comes in. We are a health-care facility and we should be emphasizing health care and helping people get better.

I know you touched upon this a bit, but what are some other services that you hope to provide in the future that you don’t provide now?

We are hoping to add a couple of early intervention specialists as well as mental health counselors, either master’s prepared, or maybe a doctoral psychologist. I mean, the need for mental health services, for so many situations in the city, the county and the nation, is growing so much. So I think that is the greatest need to fill; as well as a pharmacy for people who need help with their medication and for health insurance premiums.

Aside from SAAF’s mission, what is your own personal vision for SAAF as president?

I was lucky to have a mother who was very dedicated to social justice; she sort of modeled for me, you know, the Seven Corporal Works of Mercy: feed the hungry, comfort the sick … She had me volunteering at soup kitchens; I worked at orphanages; so all along, my whole career, it has always been with vulnerable populations. I’ve worked in geriatrics and with children’s cancer. I just want to do the most we can for the community that needs us. I feel that when you do that; when you feed people — we have three meals a day here, we help them get on their way and their health — it not only improves their lives but it helps the community. We have a wonderful group of case managers and it’s just amazing to me.

What are you most looking  forward to?

Hopefully, when we get to reduce viral load, that’s always the gold star. And of course I always say, as a nonprofit, you should do everything you can so that you’re just not needed anymore; till you just shut the doors because you’ve done all you can and solved all your missions. Maybe one day we won’t even have to ever be here anymore because HIV has been reduced or somebody’s found a cure, but until then, we are always here to help.

Nearly 30 years ago, Robert “Papa Bear” Edwards started the San Antonio AIDS Foundation (SAAF) in the back of a...