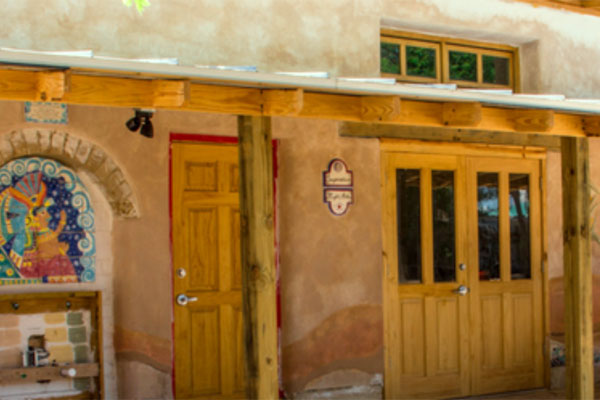 The women of the Esperanza Peace and Justice Center’s MujerArtes clay cooperative have reason to celebrate with the opening of their new studio — a building made entirely compressed earth blocks, otherwise known as adobe.

The new building, which opens on September 9, is located at 816 S. Colorado and will take it’s place alongside Casa de Cuentos, Casita de Cuentos, and Ruben’s Ice House in a complex known as the Rinconcito de Esperanza.

The cooperative first opened its doors in 1995 offering classes in clay arts to working class women of all ages. In a press release, Esperanza explains, “Through sculpting, drawing, painting and the telling of their stories —their clay creations reflect the lives of the women, as Mexicanas, Chicanas, Latinas, and Westside residents.”

Many of the clay artworks created by the women of the cooperative can be seen and purchased at the Esperanza’s yearly International Peace Market and Hecho a Mano sale. The cooperative also has special exhibits on Mother’s Day, Dia de los Muertos and the feast of the Virgin of Guadalupe.

“The new building housing the Esperanza Peace and Justice Center’s Cooperativa MujerArtes is the result of the dreams and hard work of numerous people,” Patricia de la Garza of MujerArtes said in a press release. “This is the perfect manifestation of ancestral techniques and modern practices. It provides a platform for us to open ourselves up to creativity and to express who we are as individuals, and as a community, through the goodness of clay.”

In a statement, Graciela Sanchez, the director of Esperanza, explains the new building was created in homage to the indigenous peoples of San Antonio who built with adobe and to the citizens of the Westside.

Douglas Melnick, chief sustainability officer with the City of San Antonio says the new MujerArtes studio “is an innovative and sustainable space that connects the community to the culture through art, in a building that is sustainably made with compressed earth block, and provides an opportunity to financially improve the lives of the artists and the surrounding community.”

Even as rain continues to pummel East Texas, LGBT organizations are mobilizing to help the victims of Hurricane Harvey with...