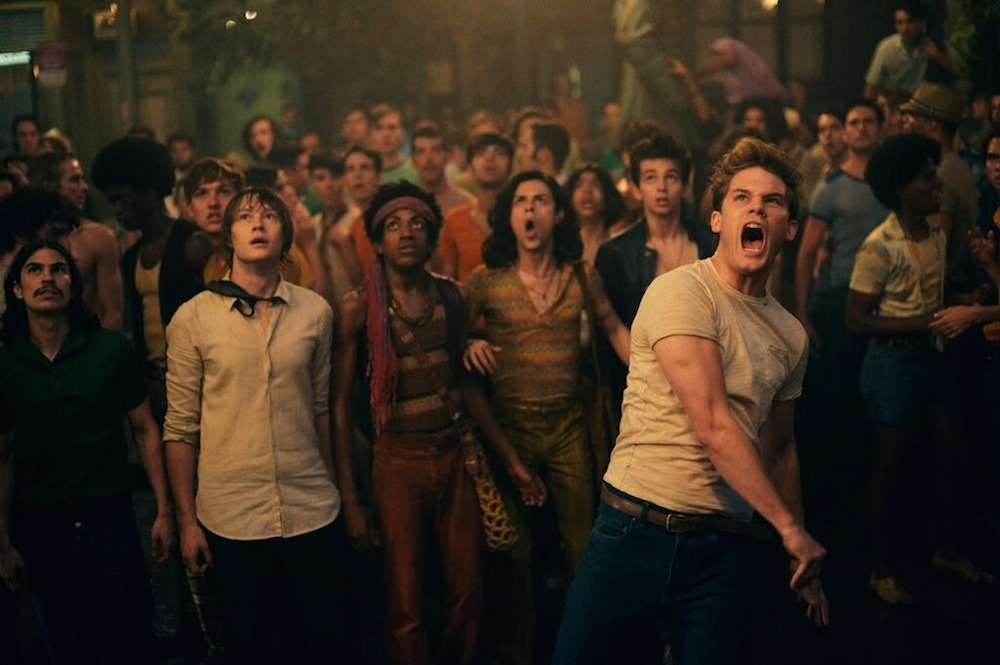 A still from the film, with Jeremy Irvine as Danny.

The recently released trailer for Stonewall, an upcoming film about the Stonewall riots, purports to tell the story of “unsung heroes,” but the online community has been quick to point out the flaw in that claim, arguing that the film whitewashes and erases trans people from LGBT history. A petition, which has garnered more than 20,000 signatures in under a week, was started in response to the trailer encouraging potential viewers to boycott the movie.

The Stonewall Riots of 1969 were a landmark moment in LGBT history and are considered to be a key event leading up to the gay liberation movement. Many of the rioters were people of color, as well as trans people of color.

Marsha P. Johnson was a Black trans drag queen credited with throwing the first brick at Stonewall. Some of the criticism that has been noted includes the fact that the Stonewall trailer depicts the film’s main character, a white cisgender gay man as throwing the first brick. While Johnson is included as a character in the film, people have also been critical of the fact that, yet again, a cis actor is portraying a trans person.

Storme Delarverie, not a character in the film, was a biracial and gender-nonconforming lesbian whose arrest and shouts at the crowd for not doing anything about the arrest are seen by some as a catalyst for people becoming physical with police.

It’s thus odd that a film about Stonewall should star mostly white and all cis leading actors (it also doesn’t have anyone casted for the roles of Delarverie, Rivera, or Miss Major Griffin-Gracy).

But not everyone is in agreement that the film might be representing history inaccurately. In a comment on a Facebook post by Stonewall director Roland Emmerich, gay rights activist Larry Kramer ignored the issues of trans erasure and whitewashing and instead suggested that LGBT people of color at Stonewall did not play the role they claim to:

“don’t listen to the crazies. for some reason there is a group of “activists” that insists on maintaining their prime importance and participation during this riot. unfortunately there seems no one left alive to say “it wasnt that way at all”, or “who are or where the f— were you.” as with so much history there is no way to “prove” a lot of stuff, which allows artists such as yourself (and me I might add) to take essences and attempt to find and convey meaning and truth…”

Emmerich defended his film and encouraged critics that it would include some of the figures people say should have bigger roles in the movie:

“The courageous actions of everyone who fought against injustice in 1969 inspired me to tell a compelling, fictionalized drama of those days centering on homeless LGBT youth, specifically a young midwestern gay man who is kicked out of his home for his sexuality and comes to New York, befriending the people who are actively involved in the events leading up to the riots and the riots themselves. I understand that following the release of our trailer there have been initial concerns about how this character’s involvement is portrayed, but when this film – which is truly a labor of love for me – finally comes to theaters, audiences will see that it deeply honors the real-life activists who were there — including Marsha P. Johnson, Sylvia Rivera, and Ray Castro — and all the brave people who sparked the civil rights movement which continues to this day. We are all the same in our struggle for acceptance.”

Emmerich’s intentions seem benevolent and maybe the choice to center the film on a white, cis male will make it more accessible to mass audiences. But his concluding statement presents a mentality that minimizes the struggles of poor people, people of color, and trans people. The struggle for acceptance is simply not the same for everyone. Much like saying “all lives matter” only serves to undermine efforts calling attention to disproportionate police violence against black people, saying that people are all the same in their struggle for acceptance only undermines and reflects a discomfort with efforts to highlight the contributions of marginalized populations.

In a newsletter explaining why the riots occurred, the Mattachine Society, an early gay-rights organization, emphasized that it was those on the fringes of an already marginalized group who were really the central players at Stonewall. “[Stonewall] catered largely to a group of people who are not welcome in, or cannot afford, other places of homosexual social gathering… The Stonewall became home to these kids. When it was raided, they fought for it. That, and the fact that they had nothing to lose other than the most tolerant and broadminded gay place in town, explains why.”

While Stonewall may do a better job of telling the stories of “unsung heroes” than the trailer reveals, critics should not be expected to settle for something they don’t feel is up to par. Like the people at Stonewall fought for their own space in a society that didn’t accept them, today’s LGBT people of color are fighting for their own space in history.

Enjoy candy, bubbles, and a classic film screening to raise money for Project Embrace In celebration of National Chocolate Day,...