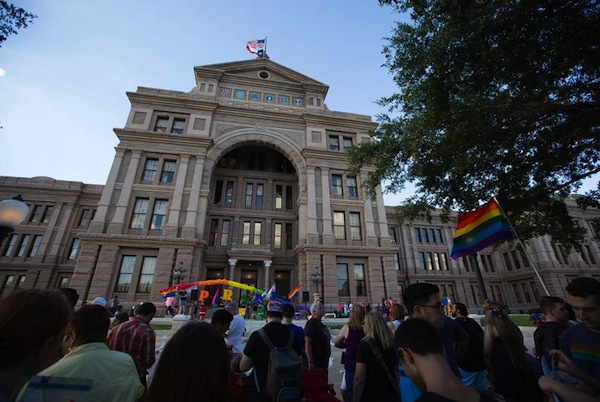 Activists and members of Austin's LGBTQ community gathered on the steps of the state Capitol on June 28, 2017 to celebrate the anniversary of the 1969 Stonewall riots. (Photo: Austin Price/The Texas Tribune)

A professional organization of social workers called the change “incredibly disheartening,” while Gov. Greg Abbott’s office said it was necessary to conform with existing state law.

By Edgar Walters, The Texas Tribune

The Texas State Board of Social Work Examiners voted unanimously Monday to change a section of its code of conduct that establishes when a social worker may refuse to serve someone. The code will no longer prohibit social workers from turning away clients on the basis of disability, sexual orientation or gender identity.

Gov. Greg Abbott’s office recommended the change, board members said, because the code’s nondiscrimination protections went beyond protections laid out in the state law that governs how and when the state may discipline social workers.

“It’s not surprising that a board would align its rules with statutes passed by the Legislature,” said Abbott spokesperson Renae Eze. A state law passed last year gave the governor’s office more control over rules governing state-licensed professions.

The nondiscrimination policy change drew immediate criticism from a professional association. Will Francis, executive director of the Texas chapter of the National Association of Social Workers, called it “incredibly disheartening.”

He also criticized board members for removing the nondiscrimination protections without input from the social workers they license and oversee.

Steven Parks, a social worker in private practice in Houston who works with child trauma victims, told The Texas Tribune the rule change was “both a professional and a personal gut punch.”

“There’s now a gray area between what’s legally allowed and ethically responsible,” he said. “The law should never allow a social worker to legally do unethical things.”

The Republican-led Texas Legislature has long opposed expanding nondiscrimination protections to LGBTQ Texans in employment, housing and other areas of state law.

Alice Bradford, the board’s executive director, said she received an email from the governor’s staff recommending the change Friday, three days before the board’s Monday vote.

The vote happened during a joint online meeting of the social work board and the Texas Behavioral Health Executive Council, which oversees a host of regulatory agencies for professions related to mental health.

Darrel Spinks, the council’s executive director, said he had sought an “informal” opinion from the Texas attorney general’s office about the rule change and that the attorneys agreed with Abbott’s interpretation. “Your rule needs to match what the statute is,” Spinks said.

Francis pushed back against that idea. “Rules can always cover more ground as long they don’t contradict the law, which these protections did not,” he said.

U.S. health officials have identified more than 100 Texas counties, particularly in rural areas, with a shortage of social workers and other mental health professionals. Parks, the Houston social worker, said the policy change could impact LGBTQ clients’ access to mental health services in those areas.

The social work board’s ban on discriminating against clients based on sexual orientation was approved in 2010, Francis said, and gender identity and expression protections were added in 2012.

The board fielded comments from the public after it had already changed the rule. Austin social worker Tracy Abzug told board members that “it’s actually quite disturbing to me that the Texas State Board of Social Work Examiners has agreed today to lower our standards as it relates to discrimination towards sexual orientation and gender identity.”

Responding to Abzug’s comments, the chair of the behavioral health council said she would revisit the issue — at least partially — at the council’s next meeting on Oct. 27.

“We will be addressing the issue of gender,” said Gloria Canseco, an Abbott appointee. She did not elaborate, or mention sexual orientation or disability protections.

Who do you want to be President? Early voting in San Antonio begins October 13

Early voting for the November 3 election begins on October 13 in Bexar County and continues until October 30. The...