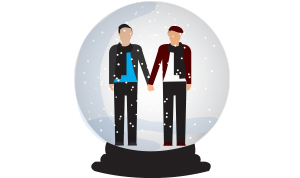 Finally!  It’s been too long. It’s way overdue, and we’re excited to see the barriers to marriage equality fall down. There’s even a clerk down at the courthouse waiting to give you a license.

But wait just five more minutes, and read this first!

Now that our community has the right to marry, we also need to look at the responsibilities that come with it. This isn’t a diatribe about the virtues of monogamy or communication. This is a cold hard introduction to marriage in Texas.

Think about it. LGBT couples have never lived under Texas marriage laws. Gay relationships have historically been formed, and dissolved, without much legal effect, and the new rules change the game–a lot. The truth is, many marriages (gay or straight) will end, but how married gay couples go about that is now wildly different.

Let’s start with some good news. We all know most of the big benefits of marriage, but there’s some nifty lesser known ones, too. Take for example, spousal privilege. A person can’t be forced to testify against their spouse or disclose private communications. This didn’t apply to gay relationships in the past. Keep in mind, a spouse can voluntarily testify against the other, and the privilege doesn’t apply if you post it on Facebook or sue each other (i.e. get divorced).

What’s life without spending one night in jail, right? Now, LGBT married couples can visit each other without all the red tape. If your spouse happens to be a long-term guest (i.e. prison), spouses are included in the definition of “immediate family members,” who are eligible to have contact visits with an inmate and visit the inmate if he or she is hospitalized. A word of advice: Try not to put yourself in a situation requiring exercise of this new right.

Most of the time, the end of an LGBT relationship has lived by the rule of “what’s mine is mine, and what’s yours is yours.” If you’re getting married, forget it. Welcome to the stage “community property.”

In Texas, almost everything you acquire while married (including debt), is assumed to be jointly owned by the spouses. It doesn’t matter much whose name it’s in or who signed for what. This includes tangible property (cars, houses, cash, credit-card debt, etc.), but also includes things you can’t see–like business reputation, the value of education, appreciation in real estate, and retirement benefits.

In the past, when LGBT couples broke break up, they worked it out on their own, and if they couldn’t the courts weren’t much help. When a married couple gets divorced, the judge (or a jury) can divide property as they deem just and right, and that doesn’t necessarily mean in half.

One important exception to the community-property rule is gifts. If one spouse gives a gift to the other, it’s the receiving spouse’s sole property. What is and isn’t a gift can easily be disputed, so make sure you save that birthday card or email that says, “Please accept this gift as a token of my love for you.”

Speak of dividing property, that brings me to the issue of at-fault divorce. In the past, it didn’t matter much who was at fault, who cheated on whom, or who hit the other (yes, domestic violence happens in LGBT relationships, too).  When LGBT relationships ended, none of that mattered in Texas beyond what friends and family thought of the offending partnerspouse.

Fault isn’t assigned in most modern divorces, but sometimes it is.  Adultery, cruelty, a felony conviction, or abandonment are all grounds for an at-fault divorce. What does at-fault mean?  It means the court can grant a disproportionate share of the parties’ property to the “innocent” spouse. Getting “taken to the cleaners” doesn’t just mean a weekend errand to a married person. Conduct matters when you’re married–not just morally–legally, too.

To add complexity to the issue, the truth is there are years of litigation to come over the minutia of same-sex marriage in Texas, and keep in mind the Texas Supreme Court probably isn’t too keen on the idea. So, being in the vanguard can often be very expensive, and unlike the fight for gay marriage, there aren’t too many firms who are going to take a gay divorce on a pro-bono basis.

I don’t mean to rain on anyone’s parade. It’s wonderful we’ve won the hard-fought battle to be treated equally. It’s just as important that both partners know what they’re signing up for when they get married.

I know I promised I wouldn’t preach about communication, but it makes such a difference. Talk about property and money with your fiancé/fiancée before the law tells you what you have to do with it. If you need a prenuptial agreement, get one. It’s hard to talk about breaking up right before you make a lifelong pledge to be with one another, but communicating about each partner’s expectations, needs, and wants doesn’t diminish that promise–it may be the very thing that allows you to keep it.

Okay, now you can run down to the courthouse and get a marriage license. If you and your partner happen to stop at a coffee shop beforehand to talk, that’s probably a great idea.

Carlos Nicolas Flores’s new novel, Sex as a Political Condition, bears the subtitle “a Border novel” and has a distinctly...