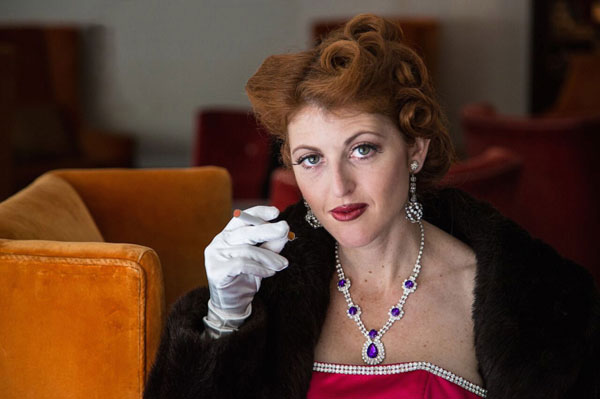 A new one-woman show that draws from the real life of actress Bette Davis will hit the stage of the Tobin Center’s Carlos Alvarez Studio Theater for three performances from February 1 to 3. Bette Davis Ain’t for Sissies is written, produced and stars Jessica Sherr.

The play takes place in 1940 just before the Academy Awards ceremony and the Los Angeles Times has leaked the list of Oscar winners ahead of time, showing Davis, who starred in Dark Victory, would lose to Vivien Leigh in Gone With the Wind. Angry and dejected, Davis sits in her dressing room and banters with the audience about her life in Hollywood.

Sherr, who hails from El Cajon, California, developed a one-act version of her play in 2010 as part of an Off-Broadway show called The Redheads which explored the lives of Davis, Lucille Ball and Shirley MacLaine. She went on to develop a full-length version of the show and in 2013, it premiered at the Edinburgh Fringe Festival. In 2015, the Scherr’s play was offered a limited run at the St. James Theatre in London and went on to have a successful Off-Broadway run.

The show has received universal acclaim. In a review last summer in Stage and Cinema, writer Lawrence Bommer said, “With flashing eyes and clipped delivery, Sherr incarnates the rebel with a cause who defied Warner Brothers to demand script control and better billing. In phone calls to her over-protective mother Ruthie we see Bette as a proud daughter of the theater who holds Hollywood’s dream factories in proper disregard even as she feeds its fantasies.”

Another review in The Stage hails Sherr’s finesse in portraying Davis. “This is not the self-parodying Davis of later years, but a proud and ambitious young actress, and Sherr wisely doesn’t let her portrayal slip into caricature.”

Erika and Shay Forbes-Wilson on Building ‘The Real Power Couples’

“Fall in love, stay in love, using the power of your love.” That is the motto of Reverend Erika Forbes-Wilson...