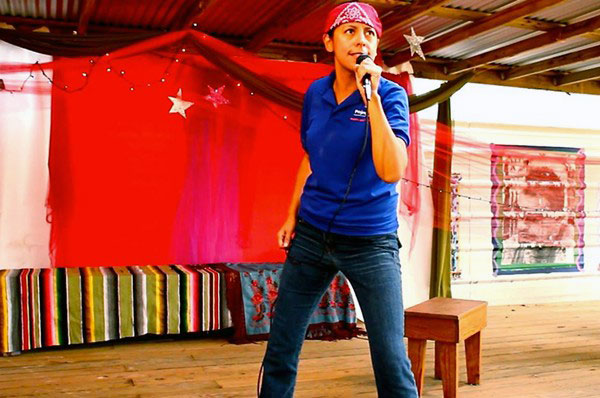 San Antonio actress Anna De Luna will bring her one-woman show, “The AIDS Lady,” to the stage of the Guadalupe Theater for two performances on October 14.

The National Association of Latino Arts and Culture and the City of San Antonio Department for Culture and Creative Development are sponsoring the free performances. The play is one hour in length and appropriate for high school students and adults.

De Luna first premiered “The AIDS Lady” about 10 years ago at the Jump-Start Performance Co. and has been performing it around the city and state since then. In the play, she portrays several characters, from herself as a young girl to HIV-infected individuals she met while working as an educator and tester at the San Antonio AIDS Foundation.

“I just felt like I had this fire in my belly about getting the word out about this particular issue,” she told Out In SA in a 2014 interview. “If you present it in a way that can hold an audience’s attention, and tell very human stories of people that are infected, I think that’s a very effective way of entertaining and educating.”

In a press release, De Luna says she wrote the play to let teens know it’s okay to openly talk about sex. “These stories humanize the virus and remove judgement of those infected. Moreover, these performance narratives help to remove fear associated with AIDS and encourage HIV testing,” she says. De Luna, a native San Antonian who received her training at the American Academy of Dramatic Arts in New York City, has been acting professionally for over two decades. She has written other one-woman shows including, “My Arab Fall” and “Chicana Atheist.” She recently was awarded a grant from the National Association of Latino Arts and Cultures to continue pursuing the full production of “The AIDS Lady.”

“HIV is not a gay thing, it’s a human thing,” De Luna told Out In SA. “I just want everybody to know that HIV doesn’t discriminate. It can happen to anybody–gay, straight, bi, male, female, young, old, black, brown, white, whatever.”

The National Association of Latino Arts and Culture and the City of San Antonio Department for Culture and Creative Development present Anna De Luna in “The AIDS Lady,” on Friday, October 14 at the Guadalupe Theater, 1301 Guadalupe Street. Performances at 10 a.m. and 1 p.m. are free and open to the public. Free HIV testing will be provided by the San Antonio AIDS Foundation from 10 a.m. to 2 p.m.

Metamorphoses: Medical Transition and Where Gatekeeping Is Headed

Like a large portion of transgender women, I have experienced immense difficulty accessing the proper care that I’ve required to...