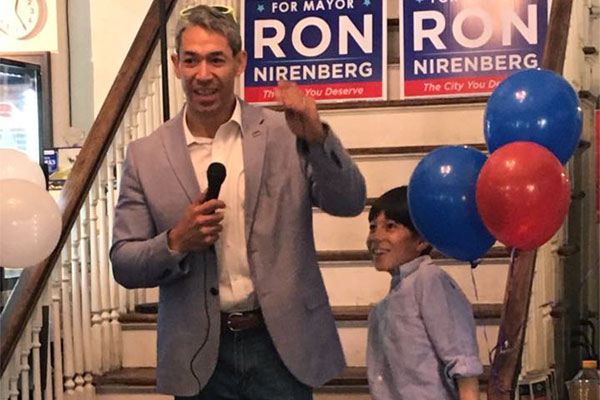 Mayoral candidate Ron Nirenberg, with his son at his side, speaks at the "1000 LGBTQ for Ron Nirenberg" event at W.D. Deli on May 21. (Photo: Facebook/Brian Lopez-Rosa)

1) Ron Nirenberg elected Mayor of San Antonio
In June, City Councilman Ron Nirenberg became mayor after winning a decisive victory over incumbent Ivy R. Taylor. Nirenberg received 54 percent of the vote while Taylor brought in 45 percent. The LGBT community cheered the victory, supporting a politician who during his campaign said, “We deserve a city that treats everyone fairly whether you’re transgender, bisexual, lesbian, gay or straight or whatever your definition, you deserve to be treated fairly by your city government.”

2) Texas bathroom bill dies quietly
For more than year, Republican Lt. Governor Dan Patrick sought to regulate bathroom use for transgender Texans. The bill, SB6, was met with opposition from Texas businesses, religious groups, the LGBT community, local chambers of commerce and sporting organizers among others. Governor Greg Abbot even called a special session in hopes of passing the bill but in the end House Speaker Joe Straus of San Antonio managed to keep it from coming to a vote.

4) Riverwalk death of trans woman was homicide
Investigators from the San Antonio Police Department determined that Kenne McFadden, a trans woman whose body was found floating in the San Antonio River last April, had been murdered. In November, a 20-year-old man was indicted by a grand jury in connection with McFadden’s death. The indictment alleges Mark Daniel Lewis caused McFadden’s death by pushing her into the river while she was impaired by alcohol and failed to help her, thus causing her to drown.

6) Facebook user threatens gun violence against Main Avenue Strip
In a series of Facebook posts on October 3, Roderick Lamar Robinson said he was was driving down to the Main Avenue Strip with a gun writing, “its war bitches and no one is safe on the strip.” As it turns out, Robinson was not in San Antonio but in Oklahoma where Oklahoma City police arrested him for creating a terrorism hoax and possession of marijuana.

7) Treviño campaign accepts contributions from Elisa Chan
According to finance reports filed by District 1 City Councilman Roberto C. Treviño, his re-election campaign received $1000 in contributions from former District 9 City Councilwoman Elisa Chan, who in 2013 voted against the nondiscrimination ordinance and in a recording made by one of her employees, expressed disgust for LGBT people.

8) Syphilis and HIV rates remain high among SA’s gay and bi men
Unprotected sex and drugs have sparked a troubling trend for San Antonio: An increase in rates of sexually transmitted diseases, including HIV, especially among young men who have sex with men.

9) LGBT activist walk out of WOAI bathroom bill town hall
WOAI’s Randy Beamer tried to host a “town hall” on Texas Senate Bill 6, the anti-trans bathroom bill. After about 15 minutes of discussion, LGBT activists and allies had heard enough, stood up and walked out of the Tobin Center during the live broadcast leaving the auditorium nearly empty. Ron Casola
Ron Casola, founder and artistic director of the Live Oak Singers, an LGBT and allies chorus, died on February 21 after a battle with Alzheimer’s. Casola moved to San Antonio from Phoenix in 2013 to be near his family and made it clear at the time that this his illness was not going to be an impediment to living life to the fullest. Chuck Hernandez
Chuck Hernandez, chef, caterer and author of “Pesto Power,” passed away on May 12. Hernandez moved to San Antonio more than 20 years ago to help his father run restaurants. He brought Arugula Catering with him and became known for his elaborate and tasty spreads. Hernandez opened O’liva at Plaza de Armas in 2015, with locally sourced fare, but the restaurant shuttered last October.

A select month-by-month recap of stories about our community reported here and elsewhere in 2017. JANUARY Jeffrey James is Fiesta...