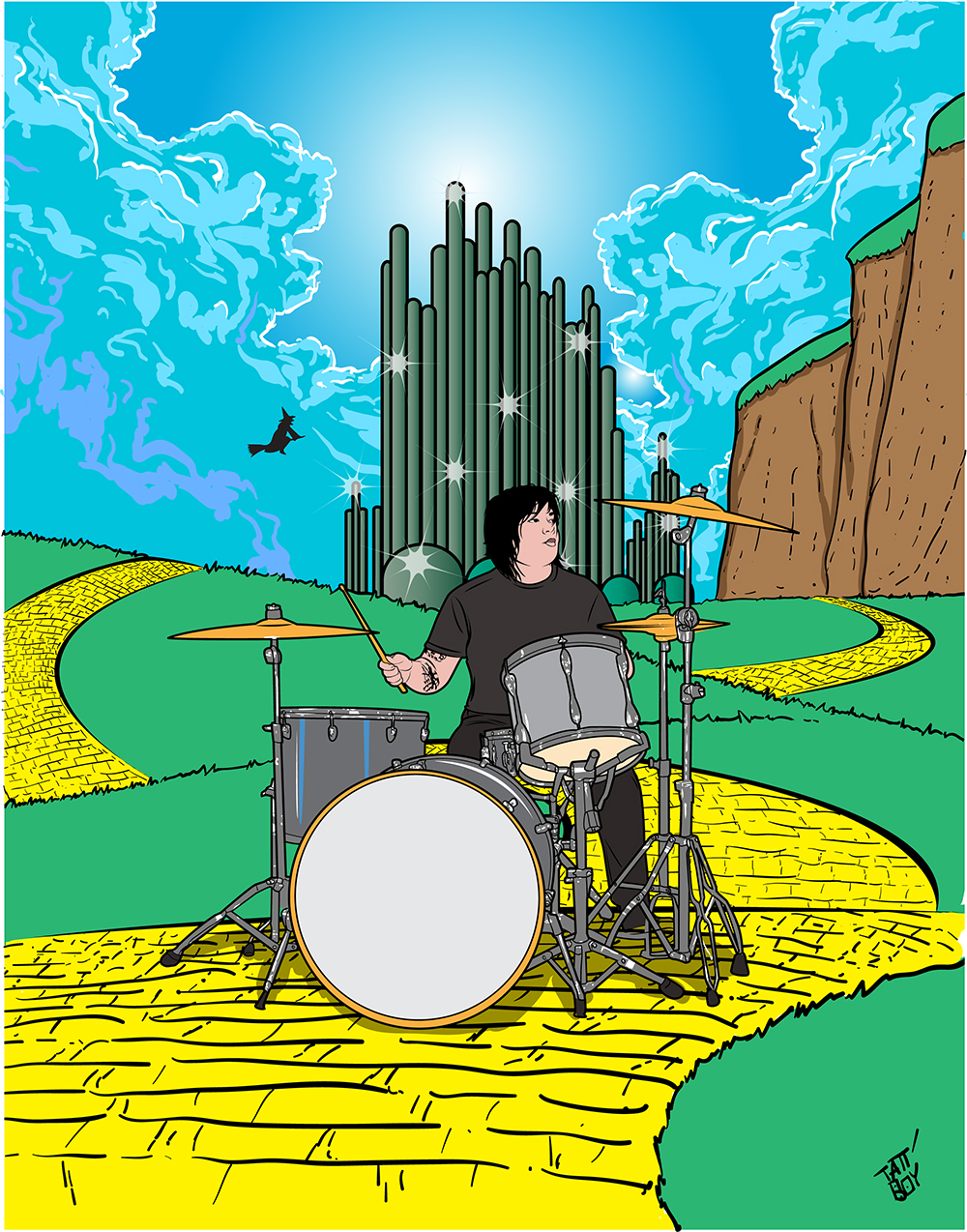 Phanie Diaz illustrated for Out In SA by Ray Tattooed Boy

To me, being on tour is like Dorothy walking into Oz. You leave all you’re familiar with and discover a new world. You never know what you’re going to come across. There are so many characters you encounter. Even your own band takes on a role. You have your Scarecrows and Tin Men, your good and evil witches, flying monkeys, and of course, Dorothys.

Just like traveling through Oz, you find yourself on a soul search — not exactly sure what it is you’re looking for. I’ve been pretty lucky, just as Dorothy was, to find some great people to guide me down the Yellow Brick Road.

My journey started about 21 years ago. I discovered rock ‘n’ roll with my best friend Jenn Alva back when MTV still had some rad shows like Alternative Nation and 120 Minutes. I was also learning about my sexuality. There were men in skirts and women in the foreground playing powerful, meaningful music. I was in awe and felt in place.

Jenn and I heard that the Melvins, Babes in Toyland and White Zombie were coming to town. We had to go; we had to see them in person. I had no clue that this show would completely change my life.

We arrived to Sunken Garden hours before the gates opened because we wanted to ensure we would be up front. Finally, the gates opened. As Babes in Toyland took stage, I was totally in awe — the power in the music, the shrieks and passion behind Kat Bjelland’s words, the pounding of Lori Barbero’s drums and Maureen Herman throwing her body as she dug into her bass. They had complete command of the stage, total confidence and power. That was their stage and I wanted to be up there. I wanted to have that power and confidence. I was a shy, awkward 14-year-old who liked girls but wasn’t sure if my confusion about my place in the world was the right way to feel. I knew I loved music but would people even want to listen to me?

Jenn and I left that evening completely inspired, and knew we had to put all that talk about starting a band into practice.

I’ll spare you all the in-betweens, just in case I decide to write a tell-all book. (I kid. I think.) I still can’t believe everything I’ve seen and done as a working musician. I’ve played with a lot of my heroes, but it all came full circle when Fea, my side project from Girl in a Coma, was invited to tour with Babes in Toyland.

After a month-long Fea tour and a couple of weeks at home, we left again for another month on the road with Babes in Toyland. Every night with them was amazing. They sounded exactly as they did the day I saw them two decades before. Only now they were my friends. Even after all I’d done so far in my musical career, it wasn’t until the last night of the tour in New York City with Babes that I realized I had done it. I am them. I am a proud, confident woman. I own my sexuality, my presence and my passion. I have inspired others. I can say that out loud. I own the stage when I’m on it. That night at Irving Plaza, I jumped onstage with Fea as Babes played “Sweet 69” and danced as Kat howled with her powerful voice and Lori bashed on those drums.

Later that night, Lori guest-bartended in Brooklyn and my Fea bandmates (Jenn Alva and Letty Martinez) and I attended. I told Kat about that day in 1994. We laughed and cried. She made me realize that it wasn’t luck at all that got me here, it was my power and passion and relentless push to be here. She was my Glinda the Good Witch. She made me realize that I’ve had the power all along.

Phanie Diaz is the drummer for the San Antonio bands Fea and Girl in a Coma.

“You know how some serial killers are “returners” — they’ll go back to the scene of the crime to see...