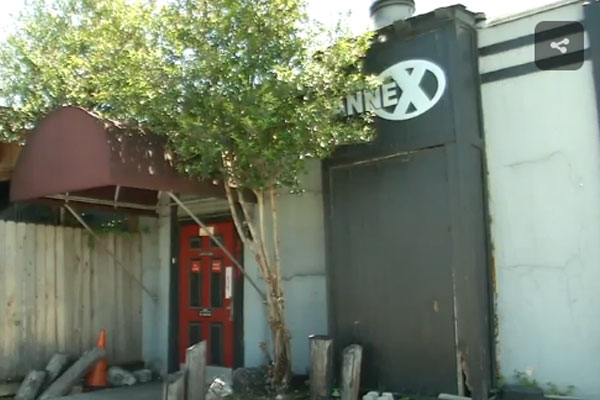 Police are regularly called to disperse groups of homeless people who loiter along San Pedro Avenue on the property of the Annex Bar. (Video capture via WOAI-TV)

San Antonio police are called almost daily to scatter dozens of homeless people who loiter near the corner of San Pedro Avenue and West Euclid Avenue where the Annex Bar and the Child Advocates of San Antonio are located.

According to a May 4 report on News4SanAntonio, in the last year police have been called 122 times to the two locations. SAPD records show homeless people are blamed for 43 disturbances at the Annex and 16 disturbances and two robberies at CASA.

“They just started hanging out there,” David Hall, manager of the Annex, told News4. “[They threaten to] be back every 30 minutes. Sometimes multiple times a day we’re calling police because they won’t vacate the premise.”

Reporter Jocelyn Tovar goes on to say, “Recent violence including a stabbing on San Pedro, a man running naked down the road, it’s clear to everyone there’s more than just homelessness at the root of the problem here.” Stella Hernandez, a homeless woman interviewed by News4 said, “You get treated like a criminal and not a homeless person. You get treated like you committed murder, a crime instead of you’re homeless you’re helpless. A lot of us have a lot of mental issues. Some of us just need someone to literally lead us by the hand.”

A former punk rocker and self-taught composer, Nathan Felix, is teaming with the Chamber Orchestra of San Antonio (COSA) for...