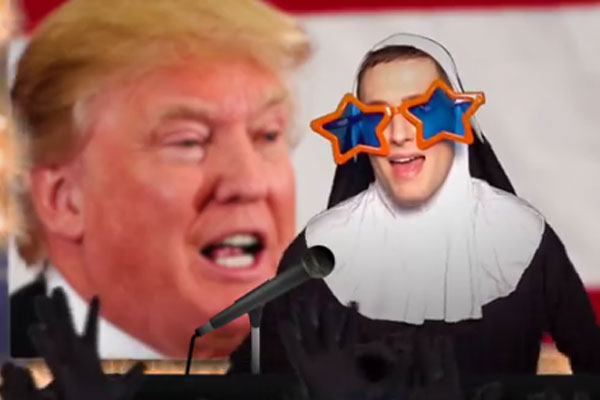 Randy Rainbow sings "How Do You Solve a Problem Like Korea." (Video capture)

The election of Donald Trump as president has turned out to be a good thing for Randy Rainbow. “Every time something happens with this fakakta administration, there’s more material,” he told Mother Jones in an interview.

For Rainbow (his real surname), resistance to “The Donald” takes the form of musical satires like “Desperate Cheeto,” set to Despacito, or “How Do You Solve a Problem Like Korea,” in which he is dressed as a nun doing an Elton John impersonation. His YouTube channel is filled with musical send-ups of the president and his sycophants.

On his Twitter account, Rainbow describes himself as a “Woke show queen, comedian, actor, songstress. activ-isht, Internet sensation and TV Personality.” He resides in a studio apartment in Astoria, Queens where creates his music videos.

Rainbow’s rising internet popularity has brought him to concert stages with a Live Nation tour that includes stops in Houston, Dallas and in San Antonio on March 25 at the Aztec Theater.

Show business runs in Rainbow’s family who encouraged his participation in theater. While growing up in Florida, his father, Gerry Rainbow was a musician and talent booker.

Rainbow says the greatest influence in his life was his grandmother. “It was really my grandmother who was the biggest influence because she’d talk back to the celebrities and politicians on TV. She was a combination of Joan Rivers, Elaine Stritch, Betty White, and Bea Arthur rolled into one,” he told the New York Times in 2017

When he moved to New York City in the early 2000’s, Rainbow was hoping to pursue a theatrical career. While working at Broadway World he started making comic videos which he posted on YouTube.

However, when Trump’s presidential campaign got into full-swing, Rainbow gained notoriety with musical videos that took political potshots at the candidate and continued when Trump was elected president. Suddenly, Rainbow’s work was not only being hailed by his internet fans but by critics as well.

“I’m not the only commentator to declare that Rainbow is the best thing about the Trump era,” Van Badham wrote last year in The Guardian. “Rainbow is not merely a symptom of these times, but a representation of its potential antidote.”

“There is an element of innocence in Rainbow’s videos that warrants mention,” Kim Hogstrom said in Out Smart Magazine. “The brilliant, funny, and often caustic jabs at the Trump administration are somehow lacking a mean spirit. It’s an intriguing combination.”

As the primary election nears on Tuesday, March 6, nearly 50 LGBT candidates around the state, including three from San...