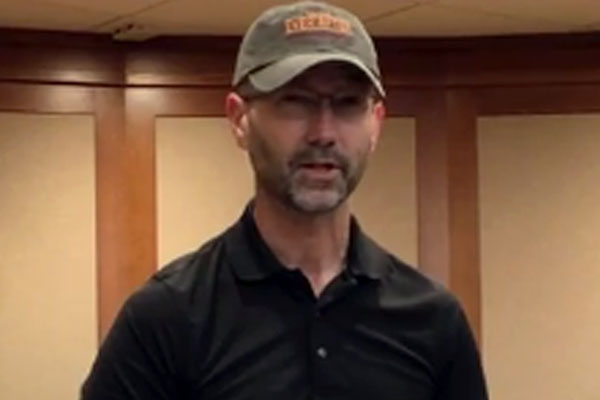 A video released by Equality Texas last week features a dad from Little Elm, Texas speaking out in support for his 15-year-old transgender son during the State Legislature’s 85th Legislative Session earlier this year.

In the video, which was recorded in January during the debate on the proposed bathroom bill, Ken Ballard says, “I was asked to talk today because I have a son. The thing is I only knew I had a son for the past two years. Twelve years prior to that, I kept calling him my daughter . . . Was I going to be his bully? Was I going to try to put him back in a box that fit the rules of my world at the time? Or only end up losing that child all together?”

The video, which was released on July 6, has spread quickly across social media and brought the struggles of transgender Texans to the national stage.

According to a report by CNN, Ballard’s son Ashur began struggling with his identity around the age of 11. The boy’s personal conflict became so intense that he began to self-harm himself and was eventually hospitalized for psychiatric evaluation.

Ballard’s acceptance of his son’s identity was sealed two years ago after he found a letter from Ashur in which he comes out as transgender saying he tried to commit suicide.

“He began living as Ashur at this point, and we have not turned back,” Ballard told CNN. “He has become stronger, healthier and gets better every day, I would say.”

“I see comments that too many parents missed out on what could have been an amazing journey for them and their child by not accepting them,” Ballard adds. “Be as excited about your kid’s life as you were at the sonogram, when ‘we are having a baby’ was enough.”

Ballard and his wife Melissa are now advocates for their son. On the day the bathroom bill passed in the Texas House, Melissa told KXAN-TV, “I personally think that a trans-boy is a boy and a trans-girl is a girl. A trans-woman is a woman. A trans-man is a man. So, nobody should be policed about where they want to go to the bathroom.”

Local Theatres to Broadcast Live Production of ‘Angels in America’

For those of us who can’t cross the globe to catch the London revival of Tony Kushner’s landmark play Angels in...