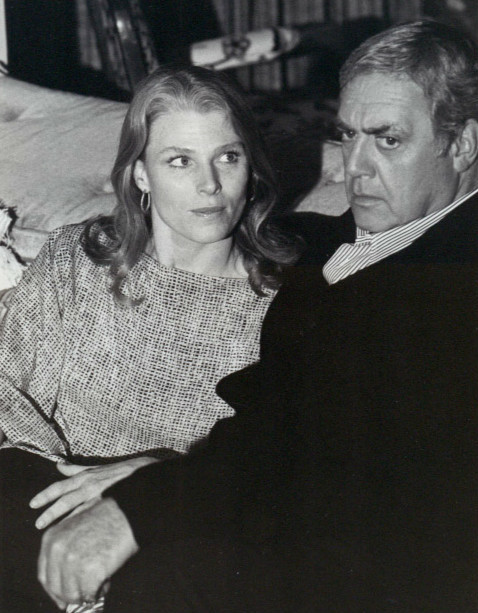 Mariette Hartley and Raymond Burr at the Kingston: Confidential premiere, 1977, by NBC Television. Uploaded to Wikipedia by We hope

Some of you may remember a delightful movie that was completely filmed here in San Antonio titled My Two Loves. It starred Lynn Redgrave and Mariette Hartley.

In My Two Loves, Gail Springer (Mariette Hartley) plays a widow who is courted by her dead husband’s best friend Ben (Barry Newman). Her search for emotional stability leads her into affairs with him and a female co-worker, Marjorie Lloyd (Lynn Redgrave). Hartley portrays a bisexual. Marjorie is a lesbian, and makes it clear she has designs on Gail in a riveting scene filmed at La Mansion del Rio.

This was in January 1986, and at a time when we were still referring to ourselves as the GL community–shortly adding the B to become the GLB community. The T was to come much later.

Admitting that a role such as this could affect her career, Hartley revealed, “I think it affected my publicist more than anyone else. She had to call Celestial Seasonings Tea to tell them I was going to play a bisexual. It was a curious feeling to think I could lose my contract by playing a bisexual.”

Jeanne Jakle reported, “An ABC-TV movie, to be filmed in San Antonio later this week, will tackle a hot-potato topic: Lesbianism.” Associate Producer Patty Newberger described the film as “the story of a vulnerable woman who is at a crossroads in her life.” Gail has a mother played by Sada Thompson and a 16-year-old daughter (Sara Inglis). The movie aired April 7 on ABC, KSAT Channel 12.

Columnist Dwight Silverman wrote, “This is the kind of film that will either anger, confuse or delight viewers. It is candid, situationally explicit and intelligently presented. In terms of acting, scripting and direction, it is nearly perfect.

“At first, Gail is confused. But as problems mount with her daughter, boyfriend and anxious mother, she turns to the only understanding friend she has–Marjorie.”

Silverman continues: “There is no explicit sex in My Two Loves, though it is plainly understood that the two women  have been intimate. And at one point, Gail’s mother walks in as Marjorie begins to kiss Gail. Mom wants to know if the two have made love and Gail answers: ‘Yes, and it was wonderful.'” (The house where this was filmed is on East Huisache.)

“The film spends much of it’s time dealing with ‘staying in the closet’ and Gail’s frustration over having to lie about her relationship with Marjorie. It is here that My Two Loves promotes tolerance, and suggests there are thousands of people living the kind of lie that Gail must endure.”

Before signing the contract, Hartley asked for a couple of changes. She felt the script lacked depth in the ending because “everyone forgave everyone else and they walked off into the sunset. It’s not that way now.”

I have looked on Netflix to see if it is available, and it is not. But someone should get a copy and play it at a San Antonio film festival.

HONORABLE MENTIONS Leading the Fight for Equality: The Texas Marriage Team On January 9, the U.S. Court of Appeals for...