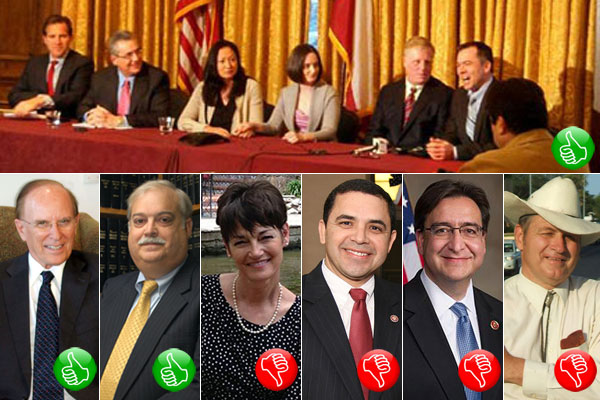 Leading the Fight for Equality: The Texas Marriage Team
On January 9, the U.S. Court of Appeals for the 5th Circuit in New Orleans will hear the State of Texas’ appeal of U.S. District Judge Orlando Garcia’s ruling that the state’s same-sex marriage ban is unconstitutional.

This case would never have reached the 5th Circuit without the determination of the four plaintiffs, Vic Holmes, Mark Pharris, Cleopatra DeLeon and Nicole Dimetman, and their legal team from the firm of Akin Gump led by Neel Lane and Barry A. Chasnoff.

The couples filed their original federal lawsuit challenging the state’s marriage ban on October 28, 2013 in San Antonio. On November 22 of that year, the they sought a preliminary injunction to bar Texas from enforcing the ban. Their case went to court on February 11 of this year.

Two weeks after the hearing, Judge Garcia declared Texas’ ban on same-sex marriage unconstitutional. Garcia issued a stay which remains in effect while the state appeals.

With grit and determination, the two couples kept the case in the public eye through media interviews, public appearances and, thanks to their lawyers, an aggressive legal agenda. When marriage equality comes to Texas it will be because this team made it happen.

In spite of the fact that Wolff promised to provide benefits for the domestic partners of county employees, initiate LGBT sensitivity training and change the county’s EEO policy to include LGBT protections, Stonewall gave the nod to County Commissioner Tommy Adkisson who went on to lose the primary. Wolff was re-elected in the general election with 52 percent of the vote against Republican challenger Carlton Soules.

Undeterred by the Stonewall snub, Wolff moved immediately to make good on the changes he announced at the endorsement forum. The first of his proposals, a plus-one insurance program, was approved in a unanimous vote by the Commissioner’s Court in early February.

“We put it on the agenda on a Friday and we voted on Tuesday,” Wolff told QSanAntonio at the time. “We got some complaints on the day of the vote and and at a later meeting. But it was hard for opponents to raise a case because I said, ‘We are not going into the bedroom.’ If they meet the criteria they’ll get the insurance.”

Another of Wolff’s proposals, diversity training for county employees got underway immediately. Final changes to the county’s EEO policy are still in the works.

Rickhoff, who is a Republican, told the San Antonio Express-News that the state’s ban on marriage equality was a “civil rights violation.” He said he was prepared to keep his office open 24 hours a day to accommodate same-sex couples seeking marriage licenses. If demand warranted, Rickhoff said he would set up tables in Main Plaza to handle the overflow.

Rickhoff even lined up district judges to waive the state’s 72-hour waiting period before weddings can occur, as well as officiants to conduct the ceremonies. Judge Garcia never lifted the stay but Rickhoff’s choice to go against the Republican flow will long be remembered by the community.

Doctor of Discrimination: State Senator Donna Campbell M.D.
State Sen. Donna Campbell of New Braunfels proposed a constitutional amendment that would make it legal for Texas businesses to fire LGBT employees and turn away LGBT customers if their religious beliefs compel them to do so.

The proposal, Senate Joint Resolution 10, was filed on November 10, the first day of pre-filing for the legislative session that begins in January. The new measure has drawn concern from LGBT groups that fear it will create a “license to discriminate.”

This is the senator’s second stab at trying to deny rights to LGBT Texans, she proposed a similar measure in 2013 that died in committee.

Senator Campbell, a medical doctor, would do well to recall a maxim used by others in her profession: “Primum non nicer” a Latin phrase that means “First, do no harm.”

Cowardly Congressmen: Reps. Henry Cuellar and Pete Gallego
On March 18, nearly every Democratic member of the Senate and 148 Democratic members of the House of Representatives signed a letter urging President Obama to issue an executive order prohibiting workplace discrimination against LGBT federal workers.

Missing from the signatories on that letter were two cowardly Democratic congressmen who represent San Antonio: Henry Cuellar and Pete Gallego. (Gallego lost his bid for re-election in November to Republican Will Hurd.)

Cuellar and Gallego, when he was in office, have been a thorn in the side of San Antonio’s LGBT activists. Neither endorsed the Employment Nondiscrimination Act, never sought the endorsement of the Stonewall Democrats or shown any interest in courting LGBT voters much less offering support of their issues.

Political Buffoonery: Jack M. Finger
Dressed in a blue suit and with a fresh shave and haircut, Jack M. Finger looked every bit the part when he was interviewed by the City Council during the process to fill the vacancy left by Diego Bernal’s departure. Finger made a rambling pitch as to why he would make a good councilperson but one question posed to him by then-District 2 Councilman Keith A. Toney exposed Finger’s shortcomings.

Toney asked Finger how he would react to constituents who are of a different faith, ethnicity or sexual orientation. Finger, who is well-known for his ultra-conservative religious and political views along with his self-proclaimed homophobia, gave a jumbled reply and went so far as to say he had “friends in the homosexual community.”

Needless to say, Finger was not chosen for the council seat. Two weeks later, in his role as a committee chairman for the Bexar County Republican Party, Finger submitted a resolution to the party’s executive committee that seeks to overturn the city’s nondiscrimination ordinance and roll back domestic partner benefits to city and county employees.

Mr. Finger, you are no friend of ours.

A select month-by-month recap of stories about our community reported here and elsewhere in 2014. JANUARY From NDO to MLK...