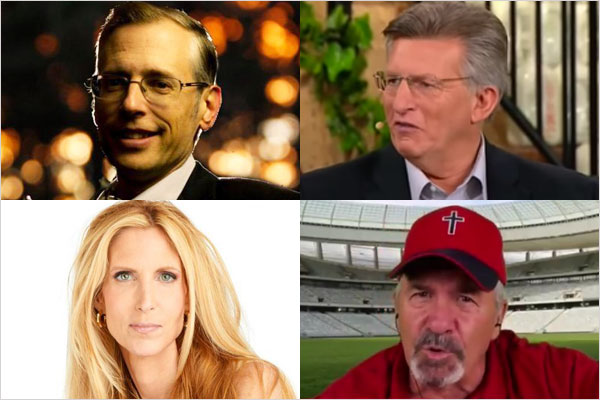 It seems that whenever there’s a natural disaster there is no shortage of right wing zealots who come out of the woodwork to declare that LGBT people are the cause God’s wrath. Hurricane Harvey has been no exception.

Kevin Swanson is a pastor in the Orthodox Presbyterian Church and broadcaster from Colorado who is renown for his condemnation of homosexuality.

On his August 30 radio program, Swanson said, “Jesus sends the message home, unless Americans repent, unless Houston repents, unless New Orleans repents, they will all likewise perish. That is the message that the Lord Jesus Christ is sending home right now to America.”

Swanson went on to denounce Houston’s former “very, very aggressively pro-homosexual mayor,” Annise Parker and the failure of the Texas Legislature to pass the proposed bathroom bill which he says “would have prevented cross-dressing men from using the women’s restrooms” because “they wanted to encourage the abomination of men attempting to dress like women and women attempting to dress like men.”

In a final proviso, Swanson added, “Repairing your houses in Houston after a hurricane is useless if you’re just going to go to hell.”

Swanson also had a warning for New Orleans, which is hosting the gay circuit party Southern Decadence on Labor Day Weekend. “Is anybody paying attention in New Orleans?” he asked. “Unless you repent, you will likewise perish. ”

Rick Wiles, the host of the TruNews radio program, is a far-right fundamentalist Christian radio host and conspiracy theorist. In an August 29 broadcast, he described Houston as “a proud city that, in recent years, has boasted of its allegiance, its dedication, its devotion to the homosexual/lesbian agenda,”

Wiles claimed Houston was experiencing God’s wrath for having previously elected a lesbian mayor and for being one of the “most gay-friendly cities in America.”

“Here’s a city that has boasted of its LGBT devotion, it’s affinity for the sexual perversion movement in America. They’re underwater,” Wiles proclaimed.

Conservative social and political commentator Ann Hart Coulter created a backlash when she tweeted on August 29, “I don’t believe Hurricane Harvey is God’s punishment for Houston electing a lesbian mayor. But that is more credible than ‘climate change.'”

This is not Coulter’s first swat at the LGBT community. In 2013, she suggested gay sex was a public health issue. “I think you’re going to have to do something about the gay bathhouses, because AIDS is very expensive, and if I’m paying for it, how about discouraging that behavior?” she said at the time. “It’s mostly, in this country, it is a homosexual behavior. If your argument is Smoking: we all have to pay, then why not, Sodomy: we all have to pay?”

Dave Daubenmire is a former football coach at Lakewood High School in Hebron, Ohio who lost his job after being sued by the American Civil Liberties Union in the late 1990’s for coercing his students to pray.

In the years since his dismissal, Daubenmire created the Pass the Salt Ministries which preaches that the great moral issues facing the country are the gay agenda, abortion, individual liberty, hate crime legislation and secular humanism.

In an August 29 webcast, Daubenmire told the City of Houston, “Could some of the problems be the result of the judgment of God coming your way because of the slaughter of unborn children? You had a lesbian mayor who wanted to look at the prayers of pastors in their churches. It’s debaucherous.”

“People tell me that Houston, Texas, is one of the darkest cities in America,” Daubenmire ranted. “Isn’t it amazing, Katrina slammed New Orleans — we know about voodoo and the darkness in New Orleans. Then it moved right down the coast to Houston, Texas. … Boom, here it comes, now it’s underwater. Water is a sign of judgment and cleansing.”

A New Adobe Studio for MujerArtes

The women of the Esperanza Peace and Justice Center's MujerArtes clay cooperative have reason to celebrate with the opening of...