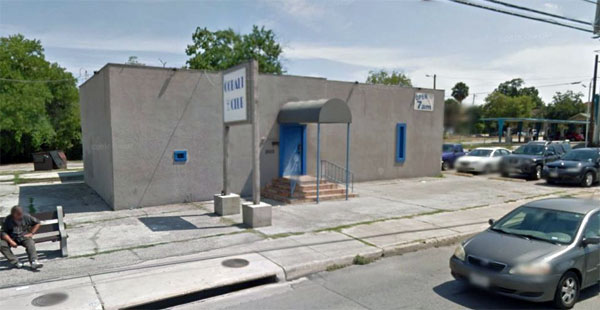 A gunman escaped with cash from the Cobalt Club during the early morning hours of February 12. (Photo: Google Maps)

WOAI-TV reports that in the early morning hours of February 12, an armed robber menaced the customers and bartender at the Cobalt Club, a gay bar north of downtown.

According to the report, sometime around 1 a.m. the assailant climbed in through a back window of the bar which is located at 2022 McCullough at the corner of Ashby.

Once inside the bar, the thief told the customers to lay down on the floor and demanded money from the bartender. He fired the gun at the bartender but missed, striking the bar instead.

According to police, the gunman, who remains at large, scored some cash and left the club by the same window where he entered. They say he was wearing a Spurs jacket with a stocking over his head, a rosary around his neck and baseball cap with the letter M on it. The Cobalt has a reputation for being the place to go if you want to drink first thing in the morning. There is often a line to get in when it opens daily at 7 a.m.

In an August 2012 review of the Cobalt, Ashley Guzman of the San Antonio Current wrote it is an “anything goes gay dive bar where San Antonio’s eccentrics flock and enjoy making newbies feel as uncomfortable as possible.”

Last October, the San Antonio Express-News described the bar in an article: “. . . its gravitational pull was especially strong Friday morning because of blaring rock ’n’ roll . . . A standing-room crowd of about 75 — graveyard shift regulars, first-timers . . . turned up for doughnuts, bloody marys, beer and tequila shots, exceeding the capacity limits of the tiny place.”

A group of LGBT activists from the Rio Grande Valley will be in El Paso on February 15 to participate...