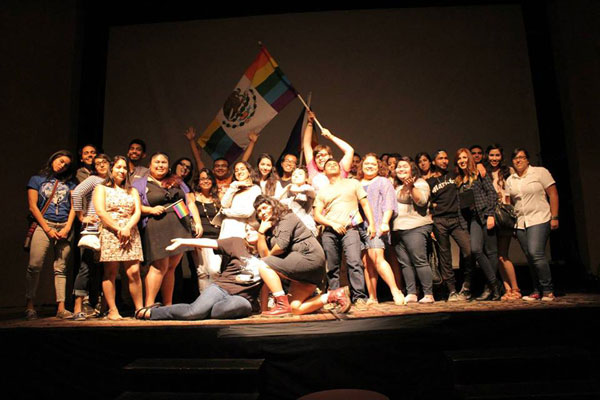 Members of Aqui Estamos RGV will travel to El Paso to participate in protests along the border with Mexico timed to coincide with the visit of Pope Francis. (Courtesy photos)

A group of LGBT activists from the Rio Grande Valley will be in El Paso on February 15 to participate in a protest demanding immigration reform just days ahead of a visit by Pope Francis to Juarez, Mexico which is just across the border.

“As political candidates of both parties argue with one another and make promises, immigrant youth from across the country are taking action to demand changes now. The leaders will also lay out a vision for communities where we all live without fear of immigration agents and police and are welcomed with love and compassion, not militarization of the border,” Dani Marrero Hi, spokesperson for Aqui Estamos, said in a press statement.

LGBT activists will join El Paso community leaders, immigrant families and allies in a march to the border for a rally featuring individual testimonials and a tribute to those who have died while attempting to enter the U.S.

The border protests are expected to continue through Wednesday, February 17 when Pope Francis arrives in Juarez. Hi says Aqui Estamos is participating in El Paso Sin Miedo to highlight the plight of LGBT immigrants, especially trans men and women, who confront a high risk of harassment in detention centers and who like other immigrants endure many hardships.

Of the 11 million undocumented people in the United States, over 267,000 identify as LGBT, according to a 2013 report by the Williams Institute at the University of California, Los Angeles. The report says this population faces economic, social and health disparities which make them one of the most vulnerable populations in the U.S.

Thanks to the Supreme Court's ruling last summer that made marriage equality legal, this will be the first year same-sex...