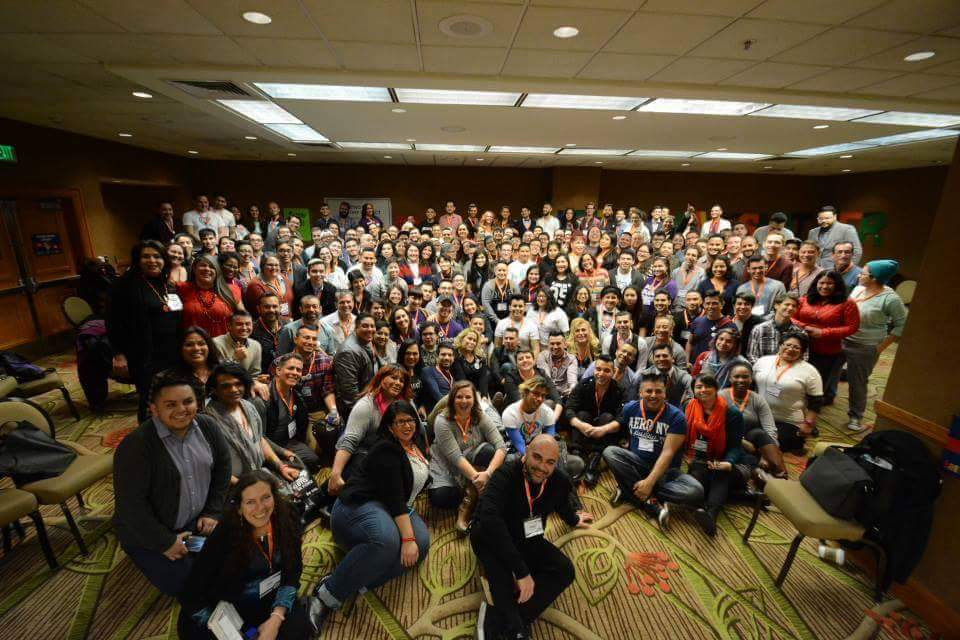 Those in the movement and social justice circles may very well know exactly what Creating Change is all about. For those not in the know, it is the largest gathering of lesbian, gay, bisexual, transgender, queer/questioning people, and their allies for the purpose of networking, organizing and skill building.

The great folks at the newly named National LGBTQ Task Force and scores of local volunteers in the host city organize the conference.  Each year the conference continues to grow and this year was no exception: an estimated 4,400 people invaded the Sheraton Hotel in the Mile-High City. The beauty of Creating Change is that you have the most diverse group of individuals in one setting–students, activists, nonprofit volunteers & staff, business community leaders, faith leaders, and organizers all sharing experiences and best practices.

Day 1 offers conference goers the opportunity to attend full-day institutes on a wide array of topics such as racial justice, youth, transgender and nonprofit organizing. Representing LULAC Council 22198 “Orgullo de San Antonio,” I naturally attended Union=Fuerza: Latino Institute. The Latino Institute offers a unique opportunity to ignite change and address issues affecting the LGBT and [email protected] communities. During this full-day institute I had the pleasure of gathering with other dedicated [email protected] who foster supportive relationships and build each other’s capacities to advance LGBT [email protected] activism.  This is one of the only national convenings organized by and for LGBT [email protected] in a bilingual and culturally competent space.

“We (LGBT) don’t advance unless we’re all advancing together,” said Caroline Dessert, executive director at Immigration Equality regarding reproductive justice during a panel discussion on the State of the LGBT [email protected] Movement.

Coalition-building and recognizing that most social justice issues are in fact LGBT issues carried on as a common theme throughout the conference. Over the next several days attendees were able to choose from an overwhelming 400 or so workshops ranging from aging and anti-discrimination law & policy to faith/spirituality, fundraising, and immigration, to name just a few. Transgender, youth and community organizing sessions were among the highest trending topics.

Sprinkled throughout the conference were plenaries led by the Mistress of Ceremonies, Kate Clinton, also affectionately known as the broad in broadband. From twerking to tweeting, drones to iPhones, Kate is where sane and zane meet. Each plenary featured some pretty talented and amazing individuals, such as Rinku Sen & Rashad Robinson, who brought us Ferguson On Our Minds; Kierra Johnson, Jessica Gonzalez-Rojas, Kris Hayashi, and Stacey Long Simmons, who presented Mobilize for Reproductive Justice, and the closing plenary and brunch featuring the Cleo Parker Robinson Dance Ensemble.

Although the speakers were great, I must admit that activists who stormed the stage on not one but two separate occasions stole the show. Shortly after Kate Clinton was introduced for the opening plenary, about 100 trans individuals and allies led by Bamby Salcedo, TransLatina Coalition President, stormed the stage demanding solidarity and inclusion from the rest of the community. “Jessie! Presente!” and “Trans Lives Matter” could be heard echoing throughout the ballroom. Jessie Hernandez, a 17-year-old queer Latina, was fatally shot by a Denver police officer just a week prior.

In addition to demanding solidarity, activists called out LGBT organizations were called out for not including trans voices on boards and in leadership positions. “We are demanding funders and organizers, especially LGBT foundations and granters, to intentionally invest in the trans community … If you serve us, you need to include us” Salcedo said. At the conclusion of their demonstration, Task Force organizers publicly thanked them for taking a stand and announced that Denver Mayor Michael Hancock would no longer be speaking as planned.

Although visibly less organized than the previous days actions, yet just as powerful, Black Lives Matter activists took over the stage right before Task Force Executive Director Rea Carey, was expected to deliver the State of the Movement Address. The first activist at the podium said that conference organizers offered a 5-minute timeframe earlier that day but the cheering audience was quickly told to expect them to use more time. “Conversations about Ferguson are not conversations about Ferguson if Ferguson is not at the table or on the mic,” said Brittany Ferrell, co-founder of Millennial Activists United. Alexis Templeton, another co-founder, said she was upset to hear people counter, “Black lives matter” with “All lives matter.” “All lives matter cannot and will not be uttered until the affirmation that black lives matter can be said without causing folks to shift in their seats,” Templeton said. “So with that being said, f— your comfort and scream ‘Black lives matter,’ because our lives depend on it.”

After the protesters exited the stage, Carey thanked activists for helping everyone move forward. “I want to thank the activists and protesters from Black Lives Matter, from Trans Lives Matter. Your words are powerful, important, and needed. As a social-justice organization and as a community of activists we want people to rage against the machine and hold our movement accountable,” Carey said. She went on to discuss the Task Force’s name change since the last convening of Creating Change in Houston, Texas, last year. The National Gay & Lesbian Task Force is now the more inclusive, National LGBTQ Task Force with the new tag line, “Be You.”

According to Carey, advocates made progress in 2014: being you at work, without the fear of being fired because of sexual orientation, gender identity/expression was afforded to federal workers and federal contractors through President Obama’s executive order. Marriage equality took a quantum leap throughout the United States. We’ve had advancements in medical research for those living with HIV/AIDS and have a real prospect of an AIDS-free world. With so many accomplishments at a local and state level, Carey asked the audience at the count of three to yell out their personal accomplishments and successes.

Although we’ve had many accomplishments, we were reminded that there are still challenges that our community faces, making it painfully clear the hard work that remains. New attacks on our progress require us to defend our past achievements while developing proactive strategies to ensure that other barriers are not thrown in our path to progress. Against all odds we strive to be whole. With every change we make, with every law we pass, with every heart we open, we ease the pain of discrimination. The LGBT movement continues at an energized speed and I look forward to seeing you at the 2016 National Conference on LGBT Equality: Creating Change in Chicago, January 20-24, 2016.

Net Neutrality: SA needs to lobby its reps for an open internet

If you could go back in time, on this day, to decide how homes would be connected to water, what...