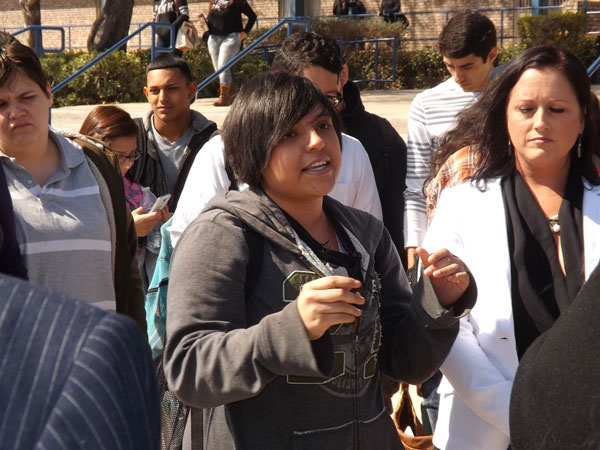 A transgender student at Memorial High School on San Antonio’s Southwest Side stood up to school officials on February 25 to demand that his gender identity be acknowledged.

Jayden Blake Castillo, who is now a senior, has been a student in the Edgewood Independent School District for four years, having attended John F. Kennedy High School, the Edgewood Fine Arts Academy and is currently at Memorial High School.

In a February 24 Facebook post, Castillo described how over the years he has had teachers misidentify his gender and has endured bullying from fellow students. Castillo says that during his four years in high school, only one teacher accepted him for who he is.

“This is my senior year, and things haven’t changed. I have English IV with a teacher named Christina Rosales. We were doing our poetry unit and were having a discussion if gender mattered in poetry. I brought up trans people, and she immediately shut me down, telling me that was ‘inappropriate’. My identity, deemed as inappropriate,” Castillo wrote on Facebook.

The straw that broke the camel’s back came for Castillo on February 16 when he tried to board a bus that was designated for male students.

“We take a bus in the middle of the day from Memorial to the Fine Arts Academy. Our buses were at first normal, then separated by gender with boys on one side, girls on the other, and then yesterday there was a ‘boy’ bus and a ‘girl’ bus,'” Castillo explains.

“I got on the boy bus, and the bus driver started giving me a dirty look. She told me to get off the bus, and I told her I was a boy, but she wouldn’t listen. She contacted some other bus driver, said ‘some girl won’t get off the bus,” and I kept correcting her I was a boy. Then, some school cops came. They got on the bus and asked for my information (name, ID number, grade, etc.) They didn’t even care when I told them the bus lady was discriminating me. I had called my mom to pick me up and take me to the Academy, and when she came, the cops also took her information (name, phone number, address, license, etc.) I was the one in trouble, for what?”

Castillo reached out to transgender activist Nikki Araguz Loyd from Houston, who Castillo heard speak at PrideFest a few years ago. He also called on LGBT activists Jennifer K. Falcon and Erick LaRue who helped spread the word to media outlets and to the community at large.

“Stand with me and ask Edgewood ISD to respect my identity and self worth and to train their teachers on LGBTQ sensitivity training so that no other child has to suffer like I have……” Castillo implored on a Facebook event page asking for local LGBT support.

Castillo also started a petition on Change.org, which over the course of one evening garnered over 300 signatures.

Last year, the U.S. Department of Education issued guidelines instructing public schools to treat transgender students consistent with their identity in single-sex classes. The guidelines mean a student who identifies as a transgender boy should be allowed entry to a boys-only class; vice versa for transgender girls in classes designed to focus on female students.

The guidelines are the latest interpretation of Title IX, which bans publicly funded schools from gender-based discrimination. Federal officials had broadly extended those rights to transgender students under Title IX in April.

On the morning of February 25, about 30 LGBT activists, including representatives from Equality Texas and Lambda Legal, joined Araguz Loyd on the steps of Memorial High School to call for equal treatment of transgender students in the Edgewood School District. Present also were about a dozen fellow students who were there in support of Castillo’s cause.

The group was joined by Castillo’s parents, Eugene and Juana Castillo, who hugged their son lovingly in front of reporters.

Castillo and his parents, along with Araguz Loyd and Falcon met with Memorial High School principal Michael Rodriguez.

After a meeting that lasted about 30 minutes, Araguz Loyd announced that Rodriguez agreed to recognize Castillo’s gender identity. She went on to say that district-wide sensitivity training will be initiated and in the future, bus transportation for students will not be segregated by gender. Castillo was also told he would have a gender neutral bathroom he could use.

The results of the meeting were greeted with cheers by those assembled on the steps of Memorial High School. Castillo who at the start of the demonstration appeared shaky and nervous was overjoyed by the turn of events after meeting with Principal Rodriguez.

Click on this link for more photos of this event.

On March 6, local artist, community activist, and musician Saakred will release a new album, Make Believe. For the 25-year-old...