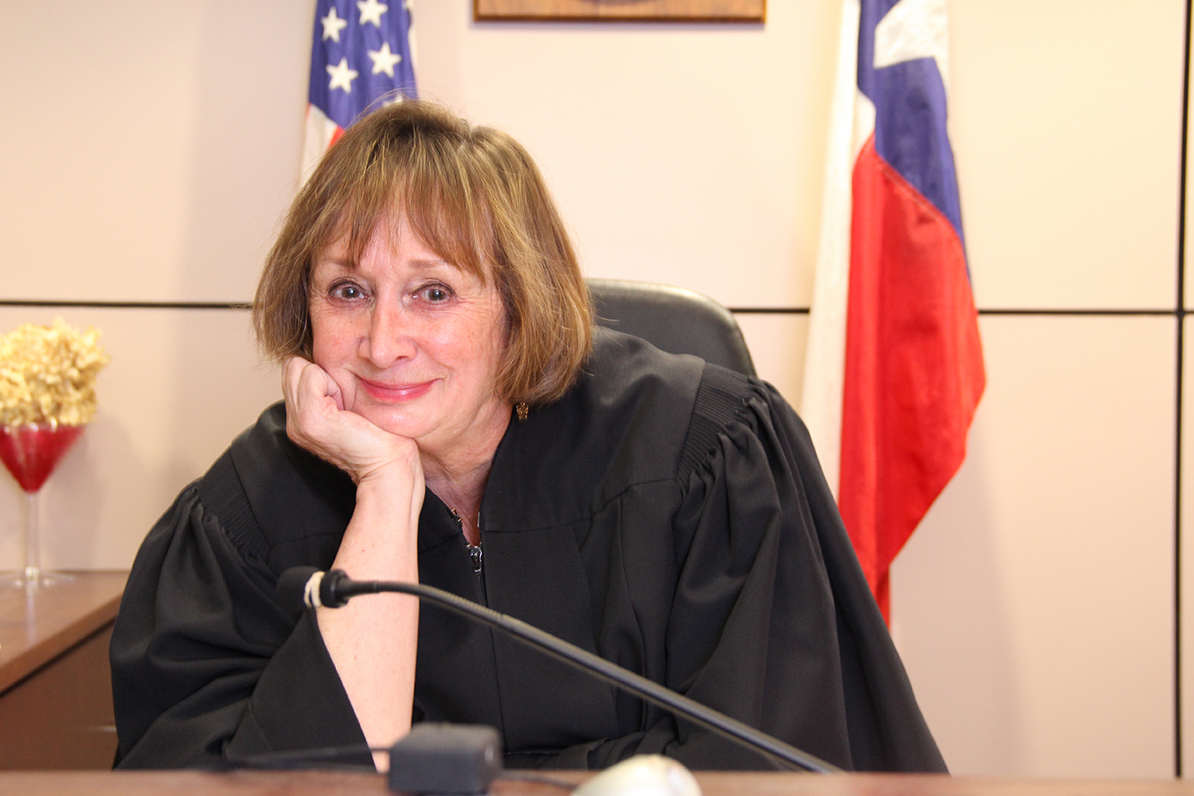 Judge Genie Wright photographed by Julián P. Ledezma for Out In SA

“In her court, she treats all individuals fairly, regardless of sexual orientation or gender identity.”

Bexar County Judge Genie Wright of County Court No. 7 was sitting at home early in the morning of June 26, 2015, anxiously awaiting the U.S. Supreme Court’s ruling regarding same-sex marriage.

After the now-infamous ruling was announced, her phone rang almost immediately. On the line was Bexar County Judge Walden Shelton of County Court No. 9.

“He said, ‘[District Court] Judge Stephani Walsh and I want you to do the first one,’” Wright said. “I said, ‘Great!’ They also said, ‘You’re going to wear Judge Carol Haberman’s robe.’ Carol Haberman was the first female district court judge in Bexar County. She had quite a collection of colorful robes. I get there, and there was a couple standing in line waiting to get married. I said, ‘Do you have an officiant?’ They said, ‘No.’ I said, ‘I’d like to do it if you’ll let me.’”

There was just one slight dilemma as the ceremony came to a close.

In doing so, Wright presided over the first same-sex marriage in Bexar County, which comes as no surprise to those who know her as a longtime supporter of the LGBT community. During the HRC San Antonio Gala in November, Wright was honored with the Equality Award, which is given to a longtime advocate of the LGBT community who upholds equality within their areas of outreach or service.

“Judge Genie Wright has always supported our community by giving visibility to gay youth organizations, attending events and giving her voice to the cause,” Julian Tovar, member of the Board of Governors and gala chair for the HRC, said. “In her court, she treats all individuals fairly, regardless of sexual orientation or gender identity. She is a champion against domestic violence, bullying and anti-LGBT efforts.”

“I have a domestic violence court,” Wright said. “What people don’t realize about domestic violence is that, in Texas, the law is gender neutral. I was seeing young gay couples involved in domestic violence situations. I saw people sitting in jail because their family members wouldn’t take them back. They were, in many times, really bad relationships, over and over. They had no one to talk to or to counsel them. The only organization I knew was the Stonewall Democrats. I went to them, and it was pretty well-received … Now that this issue is on the right side of history it’s really taken off, and there’s help for people.”

She has also long favored adoption of children by same-sex couples and advocates on their behalf.

“I do,” Wright said. “There are lots and lots of children who need good homes. If you can provide a good home for a child, are economically and emotionally stable, why shouldn’t you as a couple or individual be able to adopt a child?”

Wright is a graduate of the University of Iowa College of Law. Before becoming an attorney, she received a bachelor’s and master’s degree in education from the University of Georgia. After college, Wright taught at several schools, including Edgewood Independent School District. She has three children, all of whom are college graduates now pursuing professional careers. She and her husband Francis, who is a transplant surgeon, have been married for 43 years.

Attorney Caitlin Howell is one of three candidates who filed to run for judge of Bexar County Court at Law...