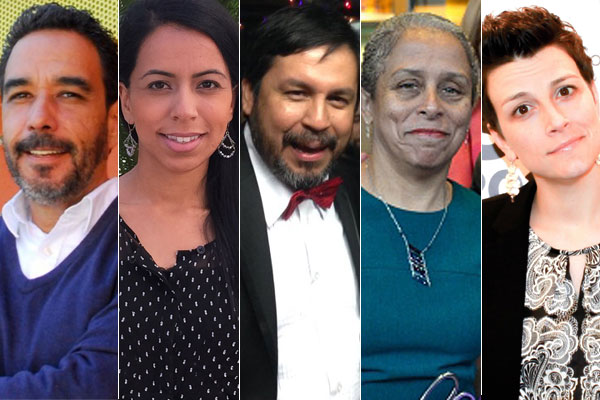 SA2020, Contemporary Art Month (CAM), the Guadalupe Cultural Arts Center (CAM) and the city’s Office of Diversity and Inclusion are presenting a panel discussion on March 29 to discuss diversity and inclusion in the arts.

The SA2020 announcement says, “With our fantastic panelists and an audience Q&A, we hope to open a dialogue about inclusion in arts in our community and foster a solutions-oriented approach to inclusivity.”

Panelists for the discussion are Jon Hinojosa of Say Sí, Kiran Bains from the Diversity and Inclusion Office, Cruz Ortiz of Snake Hawke Press, and Veronique Le Melle of Artpace San Antonio. The panel will be moderated by Molly Cox, SA2020’s president and CEO.

The Office of Diversity and Inclusion was created in May 2015 when the City Council approved the new department as part of the city budget. At the time, the mayor’s spokesperson said, “This office will be a central point of contact for all protected classes covered under the city’s nondiscrimination ordinance.”

There have been posts on Facebook which say the panel discussion was initiated after last February’s cancellation of the 2016 Contemporary Art Month Perennial when the host venue, the Guadalupe Cultural Arts Center, pulled its support from the show citing a lack of diversity among the artists whose work was chosen for presentation.

In a statement at the time GCAC said, “The lack of diversity in this year’s group of artists, specifically the lack of representation of Latina artists in this year’s edition of the perennial, has forced the organization to make this difficult decision after much deliberation and dialogue with CAM’s leaders.”

SA2020 Talks: Diversity and Inclusion in the Arts, Tuesday March 29 at The Playhouse, 800 W. Ashby Place. Doors open at 5 p.m. with cash bar. Welcome and opening statements at 5:22 p.m. Audience questions and solutions at 6:22 p.m.  Tickets are free, but you’ll need to RSVP here.

LezRideSA is accepting applications from local LGBT youth organizations for two $500 Fun Activity Grants it will award this summer....